Despite my best efforts when it comes to spending money and acquiring stuff, I’ve had a hard time getting into the subscription box trend. Mostly because, although it’s true that I do love stuff, I’m also really picky and perpetually on a budget, so I tend to be pretty particular about how I spend my money and what exactly I buy. The surprise factor of the subscription boxes has always made me a bit leery. When SaddleBox contacted me about a review I had to think on it for a bit, and responded warning them that I was only willing to do it if they didn’t mind me being brutally honest. They seemed confident, so they sent me a box. 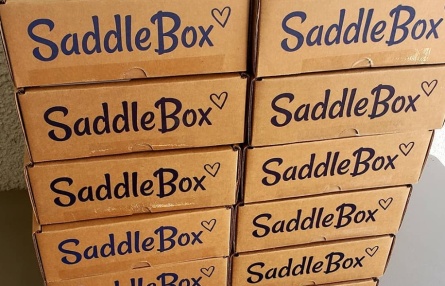 Before I get into the nitty gritty, there were a few things that appealed to me about SaddleBox upon initial inspection of their website. I really like that the company supports horse rescues – that always helps soften the blow when you’re spending money. It also always includes treats, which… Henry literally has 6 different kinds of treats right now because he is the most rotten horse on the planet. We are always down for trying new treats or just accumulating more (fun fact, they have a page full of treat recipes on their website if you’re into making your own!). 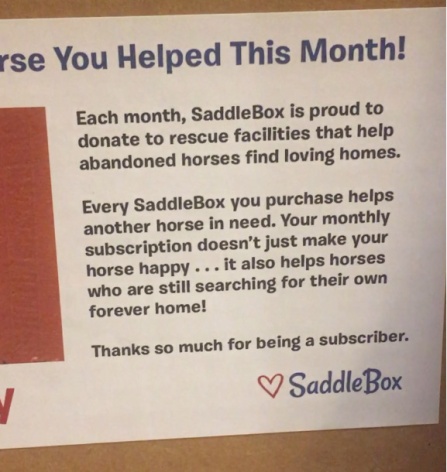 The box was relatively packed with stuff, that’s for sure. It’s always satisfying to get a heavy box with lots of stuff to dig through. In that way I can kinda see the appeal of monthly box subscriptions. It’s like Christmas. As for the actual contents of the box, some I like, some is not for me, but there are TEN items in here. The more the merrier. 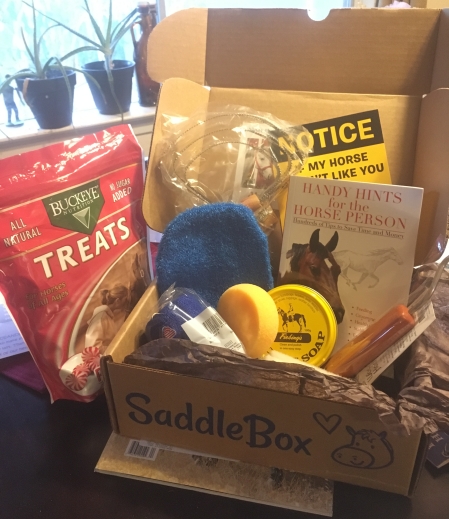 Besides treats, SaddleBox always includes some kind of grooming supplies, whether its shampoo or brushes or general barn stuff. This I really do like, because it feels like you’re getting essentials, which are always useful and makes the whole idea of a subscription box feel less frivolous. This box included:

For me personally the contents of the box were kind of middle of the road. I always like treats, although these particular ones are not Henry’s favorite… he’ll still eat them eventually, if a bit unenthusiastically. Would I have bought them? Those particular ones, probably not. Buckeye is a good brand though. The CoFlex wrap is great because there’s no such thing as too much of that stuff, let’s be real. Would I have bought that? Yes, at some point. Same goes for the tack sponge – a simple staple that I always need. The saddle soap would go in the win column for me too, because I did actually need more. The grooming mitt probably isn’t something I would have bought, but I love those types of mitts for baths, so we’ll count that as a win too. Hoof picks are another essential, although I am obsessively married to the Ultimate Hoof Pick, this Epona one is suitable enough to keep (I put it in my trailer as an emergency spare). The book was fine, I leafed through it quickly and saw a couple of semi-useful tidbits but it’s also not something I would have bought. The sticker I did find kind of amusing, so it now resides in my office at work.

The only things I definitely didn’t like were the little face brush (I legit have like 10 of them and never use a single one. I’d also just gotten an almost identical one the day before in my FEH packet so it was kind of amusing. They multiply at an alarming rate.) and the shedding blade (I hate these types of shedding blades. Haaate.). Both of those will go in the donate bin.

As far as bang for your buck, the overall value of the box is at least $55, and the cost from SaddleBox is $35 per month (or $30 for the first month’s box with the LOVEHORSES coupon code). You can cancel anytime, which is nice, so you don’t feel like you’re signing up for some kind of major financial obligation. They also have gift plans if you want to do a box or a subscription as a gift, although they’re a bit more expensive.

Overall – is there value there? Yes, for sure. Is it something I would buy for myself? Probably not. It didn’t really excite me enough to make me want to part with my money on a monthly basis. I could definitely see myself giving it as a gift though. I think the target audience for something like this is a more casual horse person or a hobby rider. A new rider would probably love it too, or a lesson kid. It’s a company I would feel good about giving my money to, so I’ll be keeping it in mind next time I need a fun, unique gift for a horse person. If you want to keep up with Saddlebox, follow them on Insta here or facebook here.

12 thoughts on “SaddleBox: a review”