On my last update about the new barn and how the boys were settling in, Presto was kind of being a dingus. He spent most of the first couple days staring out his window into the distance, snorting and pacing and flagging his tail like he was trying out for some kind of elite Arabian squad. Luckily that was just a phase, and he finally settled back into his normal weirdo self (which is loads better than his cracked out Arabian self).

Presto is not the smartest horse in the world when it comes to social situations, so he’s currently missing many chunks of skin and fur. When other horses come at him he just kind of curls himself up into a ball rather than MOVING OUT OF THE WAY, so… I dunno if/when he’ll figure that out. His right flank especially has like 5 chunks missing right now. Pretty sure at least 4 of them are because of Henry. 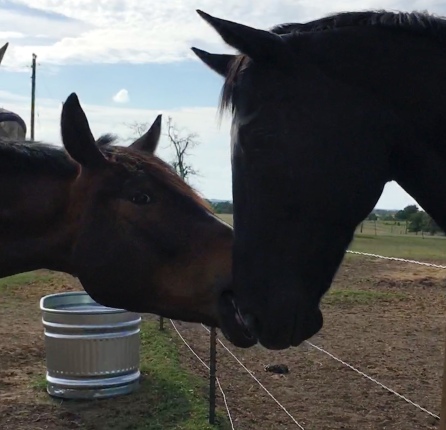 He did make a new friend in a black gelding named Otis, who actually seems interested in playing with him. That’s rare. But naturally, this has caused Henry and Otis to kind of hate each other. You should see the mare glare they exchange from across the barn aisle, and Otis tries to bite Henry when I lead him past his stall. Poor Presto doesn’t even know that this whole power struggle over “ownership” of him is going on. He’s just delighted to have discovered that this place has ROUND BALES, which he rolls on, scratches himself on, tries to climb on, and eats almost non-stop.

I’ve seen him out there basically hugging the dang thing, he loves it so much. I mean, he was born in one, so I guess it makes sense.

Last week I ponied him with Henry once, and got him out for grooming a couple times. He’s already spent some time under his new Tree of Knowledge out in front of the tack shed. It’s nice and shady and right in my line of sight, so it’s perfect for baby horses. He’s pretty solid at the whole Tree of Knowledge idea by now though, so he mostly just stands there like a decent citizen.

Yesterday I decided it was finally time to do something a little more involved, so I put him in the crossties, tacked him up, and took him out to the arena to lunge. I thought he might be a little wild, but… I got like a minute in before the barn owner was like “do you need a whip?”. I think she was tired of hearing all my clucking, trying to get this crazy childerbeast to keep trotting.

We practiced his whoa and his go and his standing skills, then I left him groundtied while I waved the whip around his head, smacked it on the ground around him, and stood behind him and waved it in circles above my head. Presto stood there looking bored like “stupid human tricks, am I right?”. So I guess we’re definitely back to normal now.

Oh, and… he fits in Henry’s dressage girth.

It’s a 28, and considering that Presto is literally 2 inches wide, I have no idea HOW, but that’s a new thing we’re doing I guess. Granted, I have to put it up all the way on both sides, but… it does technically fit. He’s hardcore growing right now so he’s mega awkward and scrawny despite spending 20 hours a day knee deep in hay. You can tell he’s starting to get a little deeper through his body though.

He’s come a long way from that little bebe we saw on the ultrasound 3 years ago today (thanks facebook memories!) during his fetal sexing appointment.

He was still cute though, even then. Big ears and all.