We’re officially moved! We loaded the rest of our stuff and the boys on Saturday morning and rolled into the new place by 9am. 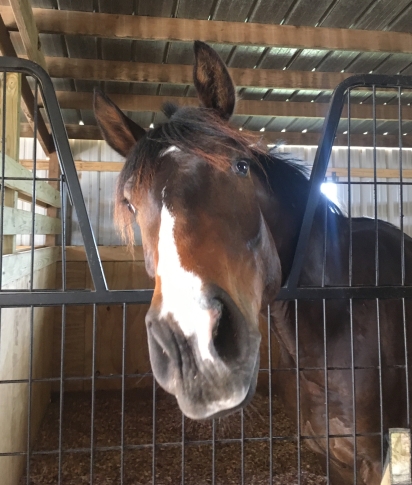 Henry promptly laid down a took a nap. Then got up, switched sides, and took another nap. I think he likes having a more deeply bedded stall with shavings again. The last barn had mats with enough pellets on top to absorb everything, but definitely not to excess. It was practical and got the job done, but probably not nearly as comfortable for napping. They’ve also got those high velocity fans that put out hurricane force winds, and they’re turned all the way up, so Henry is certainly living his best breezy napping life. He really likes being able to put his head out of his stall too, both over the door and out of his window. His last stall didn’t have either of those things.

We had some errands to run, so once we were done unpacking we left to let the boys settle in for a while. This barn is close to both my favorite local feed/general store and a Tractor Supply, so that’s a nice perk. I mean… yes I’m driving way farther to the barn every day, but at least there’s good stuff nearby. We grabbed a few things for them and a few organizational items for our tack room space. Since both of us have a lot of stuff (okay mostly me) we had to try to figure out how to condense ourselves a bit, especially tack-wise. Because eventers. 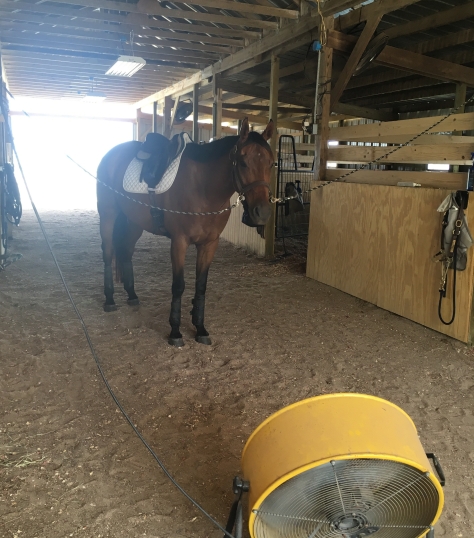 When we got back we tacked the boys up and went out for our first ride, which was mostly exploring our new space. The farm has a resident pet cow that the vet saved, and all of them were a little terrified of her.

We wandered around the arena (it’s not huge but it is a flat DRAGGED space, which I haven’t had regular access to in quite a while) and then around the perimeter of the back hay field. Once we got out there we noticed that there is actually some elevation change to it, nothing big but some small hills that would totally work for hill repeats. It needs to be mowed, which is hopefully happening this week, and we’ve also got permission to ride around the perimeter of the neighbors field as well, which connects to ours with a gate. The ground is beautiful sandy loam, which, in the land of black gumbo – this stuff is like living on gold.

We also briefly went out to the road to explore a little bit. The old farm was on a very busy road that definitely wasn’t safe to ride on, so road hacks weren’t a thing. This place is off the beaten path, with much less traffic and a good amount of space on either side of the road. We decided that we have to make friends with the people that live across the street and see if they’ll let us ride in their big pasture. It’s freaking massive.

The barn owner also said that if we keep going down the road for about half a mile there’s a little creek area with some trails where people like to go walking and fishing. Might have to check that out next.

On Saturday night they got turned out in a small back paddock together, just to let them settle a bit before they get put in with the rest of the herd. They sent us this picture of all 3 of them glued together in one corner. 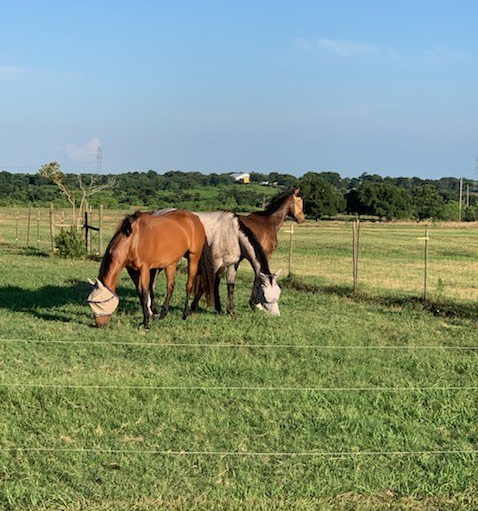 The vet was out on calls all day Saturday so we didn’t get to see him while we were there, but apparently the first thing he asked his wife when he got home was how Henry was settling in. That horse has a pre-existing fan club around here, which I’m sure he will milk as much as possible, just like he always does.

And while Henry settled in pretty quickly, Presto has been a little bit more on edge. I don’t know if it’s the cow, or the fact that you can see VERY FAR in every direction, but he’s a bit worried. Like his eyeballs are permanently bugging out right now and he snorts a lot.

When I got there yesterday morning he was alternating between sticking his head out of his window and snorting, or pacing circles in his stall. I walked him around the whole place for a while and he was on edge but not particularly panicked about any one thing in particular, so I tied him up in his stall for a while to see if that would help his brain reset. I think he just kind of got stuck in a psycho loop and needed a minute, because he immediately took it down a few notches and rested a foot.

I moved Presto’s hay so that it was under where he was tied, then untied him while we went to ride Henry and Dobby. He just stayed in the same spot eating his hay, like he thought he was still tied. But hey, at least he wasn’t being a nut anymore. Once we were done I put him out under the tree in the front and let him do some thinking on his new Tree of Knowledge. He’s nervous about turning his back to the cow, but wasn’t belligerent about it. Never trust a moo-demon.

Hopefully today he’ll be a little more chilled. He’s just gonna have to figure it out and get over it. Part of life kiddo. It’s hard being 2.