Ok, I think I’ve managed to drag this out as long as possible. Sorry I’m long-winded, I can’t help it. Day 1 recap of our FEH Champs experience is here, in case you missed it. This post is picking up with day 2.

I woke up stupid early on Saturday and couldn’t fall back asleep, so eventually I just gave up, crawled out of my air mattress cocoon, and got dressed. I tossed Presto his breakfast and then brushed out his tail and got my braiding supplies ready while he ate. Of course he managed to sleep in a pee spot and get one entire side swirly and gross, but thank goodness for brown horses, because I just rubbed it with a damp rag and voila – it was like it never happened. I braided his mane and Michelle got to work on that giant shrubbery of a forelock. When she brushed it out, it literally touched the noseband of his halter. That thing took some wrangling, to say the least.

After he was done with his beautification, I put his scrim sheet on and took him for a walk around the grounds. The sun was just coming up, and it was really foggy and quiet while we walked, which made the whole place feel kind of ethereal. At least until Presto decided to be a horse kite and start spinning and farting for a few circles. Way to ruin the moment, kid. 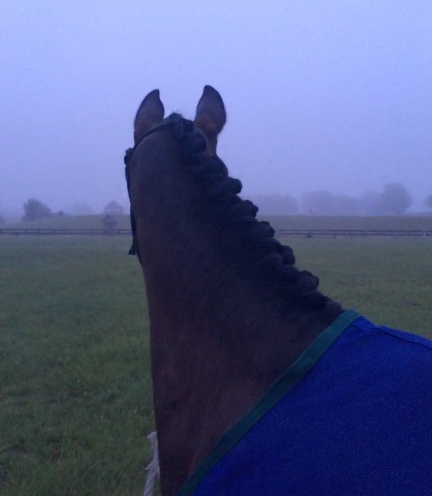 After his walk, I put Presto away and Michelle and I went down the street to the bakery for breakfast. We were gone for all of half an hour, yet by the time we came back Presto had violently rubbed half of his braids out and broken off a few big chunks of hair. Luckily I was using the Quick Knots so it was easy to unclip them, re-roll the braid, and then resecure everything. After that he could not be trusted alone anymore.

We slowly finished getting him ready and I donned my khakis and Willow Tree Warmbloods/sBs polo. The navy polo with brown helmet, brown gloves, and brown boots was definitely the right choice. We coincidentally matched Martin and it totally looked deliberate.

Around 9am, we went ahead and took him over to the arena. We hung out and chatted with Martin until the horse before us was finished, and then we were in. We waited off to the side while the judges finished their scoresheets, then it was Presto’s turn to step up to the judges. Of course, at this moment, the love of his life (of which he has several), a light gray filly named Elsa, came into view at the bottom of the hill. Presto’s attention span promptly leapt out of his ear and ran off into the field. The super quiet, half asleep baby from the evening before was suddenly very wiggly and distracted.

That whole plan for me keeping his attention while he was standing – LOL. Cute. No one had his attention but Elsa. His naturally cool nature ultimately prevailed, and he knows better than to be truly naughty, but he definitely had some ants in his pants. All of that dramatic posing did make for some cute pictures though. 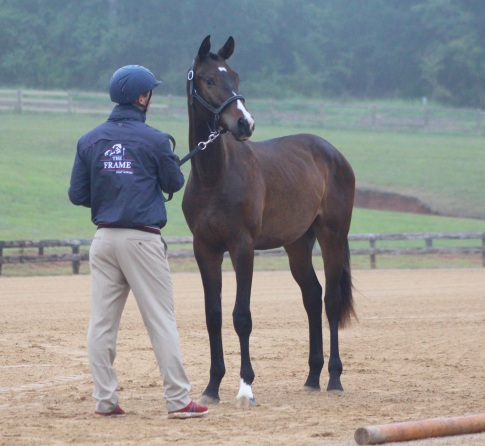 His walk, which had been nice and marching and swinging the night before when we practiced, was more tense and a bit stilted. I was glad that I had decided to hand the handling job over to Martin, he was great at managing it as best as he possibly could. There’s no doubt I could not have done as good a job as he did.

Our original plan for the trot was to have me up at the first corner of the triangle with a whip, to help encourage him “up” as they powered off on the side going parallel to the judges. Presto was pretty pumped to show off for Elsa though, and gave about 5 steps of trot before breaking into canter. Martin quickly got him back down, although Presto briefly tried to show him the dance of his people in the process.

Martin wasn’t satisfied with that pass, so he kept going for a second lap of the triangle. By this point Presto had settled a bit, and we got some decent trot. Not quite as good as he’s capable of on his best day, but close enough.

If I’d had any remaining emotional reservations about having Martin handle him instead of me, they dissolved pretty much immediately. It was SO the right choice. Not only did he show the horse better than I could have, it was priceless to be able to stand back and actually enjoy the moment, watching my baby horse strut his stuff at FEH Championships. He is the product of a lot of planning, dreaming, time, work, money, blood, sweat, and tears. Even cooler, he is a second generation homebred for me. As an amateur owner, rider, and breeder, I don’t get a lot of moments like this. To be able to share it with Michelle, his “other mother”, who has just as much if not more invested in this colt as I do, was awesome. That’s what we were truly there for, regardless of how he scored. 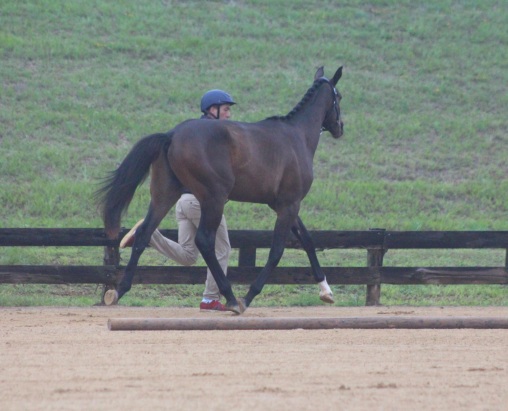 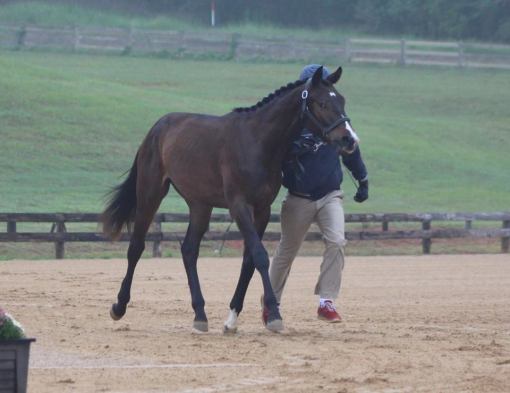 We had to wait a couple hours for awards and scoresheets, but they posted the results pretty quickly. I was shocked when my friend came up and showed me a picture on her phone that she’d taken of the posted scores. In the yearling colts, Presto was first, with a 79.925 (gah, so close to 80!). Yep, you heard me right.

WHAT? And out of all the yearlings, he was Reserve Champion. His girlfriend Elsa beat him with an 80.675.

To say I was surprised was an understatement. I was expecting for him to end up on the other end of the spectrum. I definitely never imagined that he would win the colts and end up 2nd overall out of all the yearlings. It was a really nice group of babies. Proud is an understatement. Yeah, it’s just FEH – we’ve still got a loooooooong way to go before he’s a real event horse – but it’s a pretty fun moment in his life, either way, and a great experience for both of us.

I know of four Mighty Magic’s that were entered in FEH Champs, across the three sites, and all four of them won their class. Pretty cool. Plus Presto won some swag, including a nice leather halter that he may or may not grow into someday. It’s pretty, that’s all that counts.

I sent a couple of these pics to Dr. Kari, the vet who spent so many days and nights trying to keep him alive in that very tough first month of Presto’s life. She loved them, said that she tells The Legend of Presto to her vet students all the time, and that she still has a coffee mug on her desk with him on it. We both get a little emotional about him, I think because we still vividly remember the sad little colt on death’s doorstep who spent so long hooked up to bags of fluid and plasma, fighting for his life against pretty insurmountable odds. For her, he’s a success story from a situation in which there rarely is one. I can never thank her enough for all she did for him… she quite literally saved his life, many times over. It’s pretty cool to get to share moments like this with her and have her get just as excited about it as I do. I know Presto has no concept of what he’s had to overcome, but we sure do.

I’m still waiting for pictures from the pro photographer, so you’ll probably be seeing even more of these. I’m not sorry. Also, shout out to my friend Kate, who writes for Eventing Nation and took some of these pics for me in addition to all of the ones from Michelle. Kate did a great write up about the show, if you haven’t read it yet!