Well this is definitely going to be a much different show recap than you usually get around here. There was no dressage (unless you count the lap we walked around the outside of the ring while the judge was on break) and there were no jumps (unless you count all the poles he had to walk/trip over during trail). But it was a very solid first experience for Presto, who spent all day vastly exceeding my expectations.

His in-hand trail class didn’t start until 11, but it was open for schooling beforehand and I wanted to allow him plenty of time to settle in and look at all the obstacles. I was pretty sure that between the commotion of the show and all the scary stuff on the trail course, it might take me a couple hours to get him settled. So I got to the barn around 7:30, fed him, groomed him, and intended to wait until the barn workers got there so I could get someone to help me load him. He’s ridden in my trailer once before – when I brought him home – and he’s practiced loading another time, but I’ve never loaded him alone before, not completely anyway. Ie, walking him in and leaving him while I go around the back to close to ramp. He can still get a bit insecure when I leave him in general, so I wasn’t sure that this would go well. But after looking back and forth from the trailer to Presto for a few minutes I figured what the heck, lets just try it and see.

I’ll be damned if he didn’t walk right in and stand stock still when I told him whoa, climbed out of the escape door, and walked around to close the ramp. I crammed an alfalfa pellet in his mouth (the only “treats” he finds acceptable so far), tied him, and away we went.

He neighed and craned his head around a lot for the first few minutes before settling down and aggressively eating his hay. It was only about a 40 minute ride to the show, where I asked the people at the trailer next to us to keep an eye on him while I ran to the office to check in. Once I got back I untied him, dropped the ramp, and he very politely backed out, looking both ways before letting out a trumpeting “HELLLOOOOOOO EVERYONE, I’M HERE!!!” neigh. I led him around a bit, past the warmup (with it’s flapping flags), near the dressage arena, past some XC jumps, and then settled by the jump arena for a few minutes to watch some rounds.

He neighed a bit, but he wasn’t particularly worried about anything. Once he took a deep breath and cared more about eating grass than he did about looking around, I started doing some ground work – practicing walk/trot/halt/backing, sending him around me both ways, changing directions on the end of the lead rope, etc. The familiar work seemed to help relax him even more. Since XC hadn’t started yet, I walked him up and down the little bank complex a few times. May as well start getting that idea now!

By this point he was being pretty darn chill. He was looking around, but he wasn’t particularly bug-eyed about anything, was content to stand and graze, and really only neighed if another horse neighed first. So we meandered over and started looking at all the trail obstacles. We started with the easy things that he’s seen before, like all the poles, then I walked him over both bridges. He seemed more interested in pausing to eat the decorations.

Then we tackled the stuff that he’d DEFINITELY never seen before, like the curtain of garden hoses, the pool noodles hanging around a tree, a pool noodle thing that they had to walk through, and the blue tarp that they had to walk over. The first couple of times through the curtain of hoses he wanted to spurt quickly out the other side (by “spurt quickly” I mean take like 3 trot steps when one of the hoses brushed his butt, and the first time over the tarp he leaped completely over it (not gonna punish the jumper baby for THAT instinct!) but he wasn’t particularly concerned about any of it.

We were only about half an hour into the show by this point, and I was like “well, ok… now what do we do in the next two hours while we wait for trail to start?”. So we hung out and watched jumper rounds, dressage tests, and cross country. We listened to the loud speaker and the clapping. We hung out in the shade and just STOOD, practicing being patient. Every once in a while I would go run through a little ground work again, just to check in with him. We also practiced a much smaller trot than I normally ask him for in-hand… more of a jog than a real sporthorse trot. Well, as much of a jog as a horse with legs that long can manage, anyway. Finally I decided I should probably actually learn the trail course for real, and went to retrieve my map so we could put the whole thing together and do a full run-through. 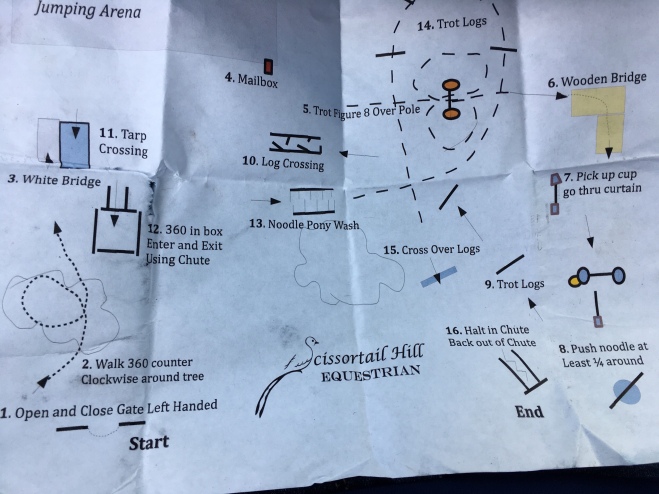 I also have to say, thank goodness for the other people out there schooling the course, because for a few of the obstacles I had no idea exactly what we were supposed to do. I’ve definitely never done anything like this before, so I had to ask questions about how some of it was supposed to be done. I mean, I know we were just there for funsies, but I wanted to at least make an effort to do the right thing. Obstacle #8 especially had me stumped – it was a plastic barrel with a spinning PVC pipe attached across the top of it that apparently the horse is supposed to push around with his nose or chest. Who knew that was a thing? The first time I led Presto up to it he thought the answer was to jump over it (again… not an undesirable reaction considering his future career) but eventually he did figure out how to push it with his chest. I think I’ve spent so long instilling the NO PUSHING ANYTHING, EVER concept into him that he didn’t think that could possibly be right. Otherwise, he understood everything else pretty much immediately, to the point where he was almost blasé.

After a full practice run of the course (During which I discovered that I’ve got to go home and work on trotting circles to the right in hand – we’ve been practicing the triangle like they have at FEH, with it’s two big turns. The circle, being one long continuous turn, was not so good.) we went back and hung out in the shade by the jumper ring. Once the course opened for judging I was the first one at the gate. It was getting hot, baby horse was being really good – it was time to be done and go home. So as soon as the judge was ready, in we went.

He got a little excited in the trot figure 8 when there was a bunch of clapping and cheering nearby, but as far as “explosions” go, it was quite tame. I just lost his focus a bit and had to walk for a second to get him back on track. When we got to the pushing-spinning thing at 8, a horse came flying through the water jump behind him and spooked him a bit, but again, as far as “explosions” go… meh. It lasted all of 2 seconds and he settled right back down. Mostly he spent the whole course tripping over the poles and tiny logs. Babies. Their legs aren’t connected to their brains yet. He neighed a couple times too, when other horses neighed first, which is fine. Really I thought he was stellar. First time at a show, first time seeing or doing anything remotely like this… no complaints.

After we were done we went and chatted with the judge, who was quite complimentary of his first attempt at trail. Obviously he is not a trail horse, this is not his future career at all, but a) he listened b) he tried c) he intelligently thought his way through all the questions instead of getting worried or upset. These are all great life skills that he’ll need as he gets older, so I feel like the outing was 110% worth it.

Once he was finished we walked around and said our goodbyes, then I chucked him in the trailer (he repeated his morning performance of walking in, then standing and waiting when I said whoa and walked around to close the ramp – it wasn’t a fluke!), and we went home. I was so proud of how well-behaved he was, mostly because I think he just really showed me how intelligent he is. All day he looked to me for guidance, and all day he stayed polite and attentive and did what I asked him to do. There was no belligerence, he wasn’t worried, and he thought his way through everything. You can’t ask for more than that from any horse, much less a yearling taking his first trip to a show.

Oh, and he ended up placing 3rd (ok, there were only 4, but still). Kiddo has officially started his own satin collection. Well… hypothetically anyway, since I didn’t stay until the class was over and pinned. Details.