XC DAY, BITCHES!!! Aka the real reason I came. Aka the only reason Henry tolerates the other two phases.

I was really excited about this course as soon as I walked it. This year brought a new course designer, James Atkinson, and I LOVED the way he used the little bit of terrain that this venue has. In Texas we don’t have a lot of hills, but he took advantage of every single one. I absolutely loved it. The fences were overall a bit smaller than in the fall (that course felt like giant fence after giant fence after giant fence) but this one was maybe a little more technical, asked a wider range of questions, and definitely used more terrain. I’m 110% all about that. The course was also running backwards from how we’ve ever run it before, which really made it feel like a whole new venue. The footing was perfect from the rain a few days before, and the weather when we went was upper 60’s. It doesn’t get much better than that.

Fence 1 was your typical first fence, just a plain log. The first 2/3 of the course was the more open area, with a few long gallop stretches thrown in. I knew that the last part of the course would ride a bit slower, so I wanted to come out of the box thinking forward and get a little bit ahead of time in the first half of the course. This is where it’s important to note that I actually FORGOT MY FRIGGIN WATCH (I had a hard time getting one of Henry’s studs in and was running behind, so forgot it in the rush because I dunno, I’m a hot mess of a person in general?) and didn’t even realize it until I was in the start box. I have a pretty good feel for pace by now though, and I had already carefully plotted out the places where I could save some ground. I just kinda shrugged internally and went “Ok, self, challenge accepted!”. I’ve spent a long time working on honing that internal pace tracker, let’s see how good it really is.

Fence two was a simple step table, which came up nicely 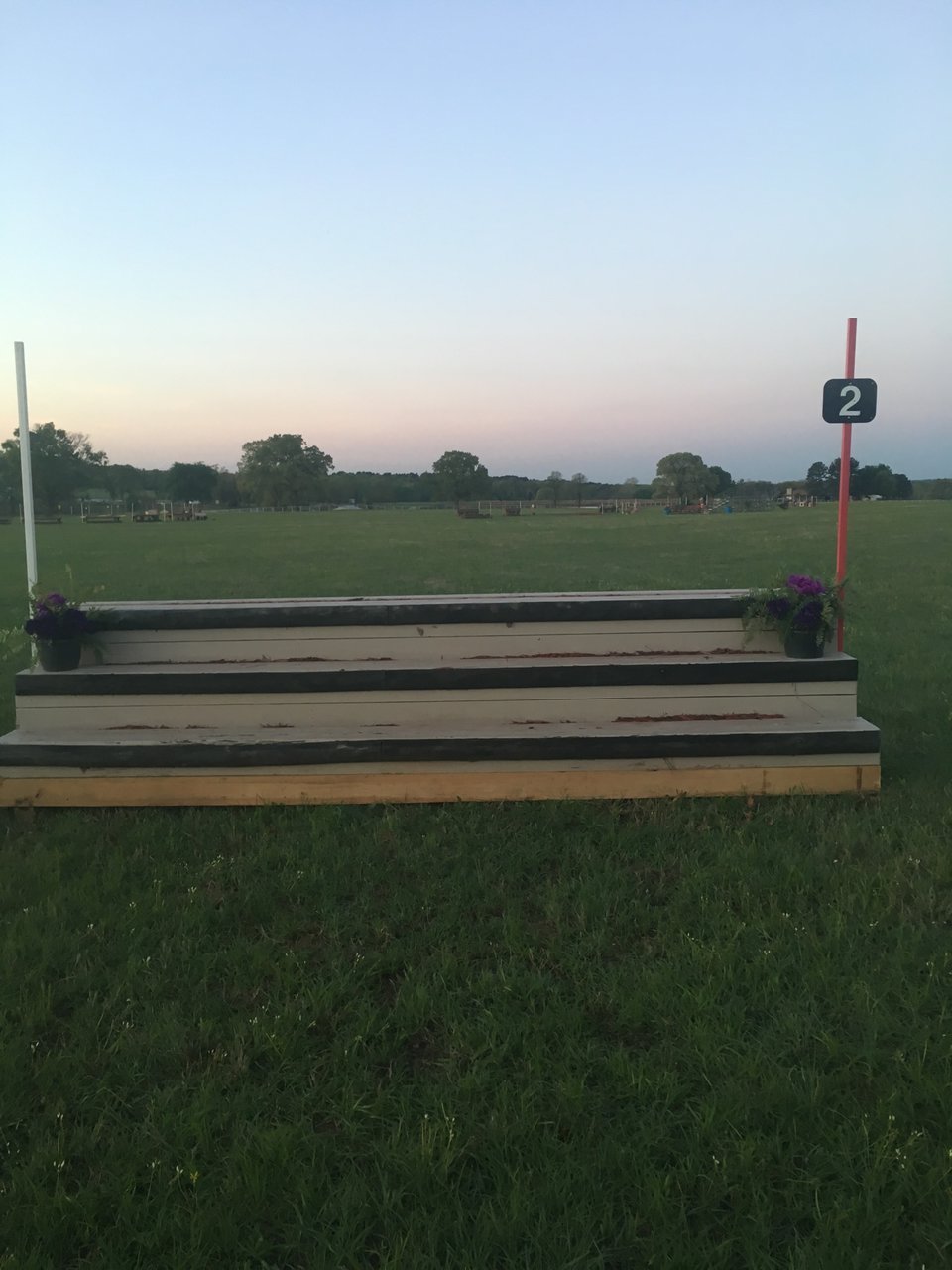 And then over to 3, the little mulch-filled table. We basically made a loop around warmup with those first 3, which had proven a little distracting to the lower level horses the day before. I don’t think Henry even noticed though, he’s so focused on finding the next fence. 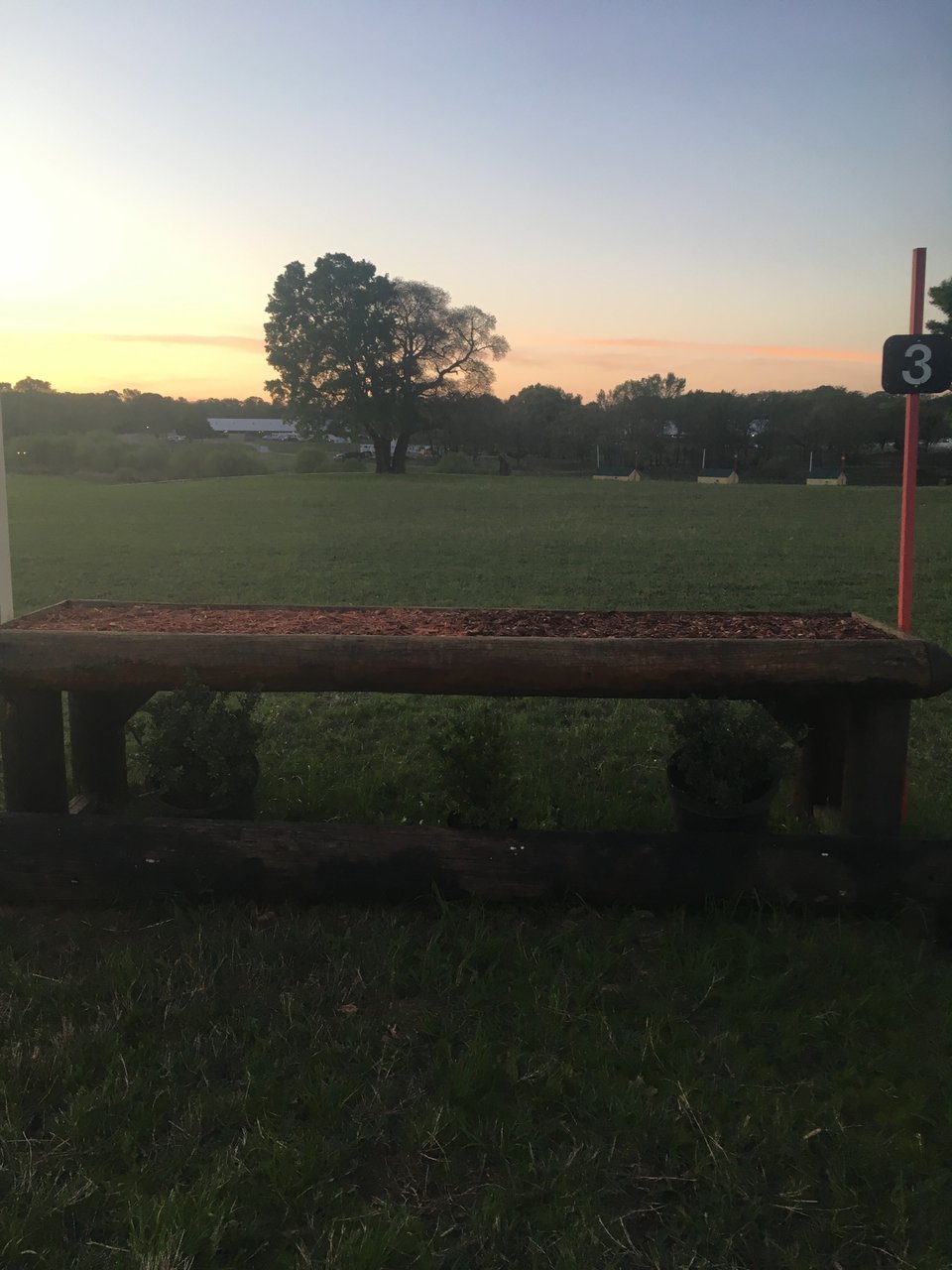 We rebalanced a bit before 3, jumped it easily, and headed straight ahead to the first terrain question. Fence 4 was a skinny-ish house with a downhill landing (I should have waited for the deep distance here, but apparently there were ants in my pants. Thank goodness for Henny and his quick feet.), 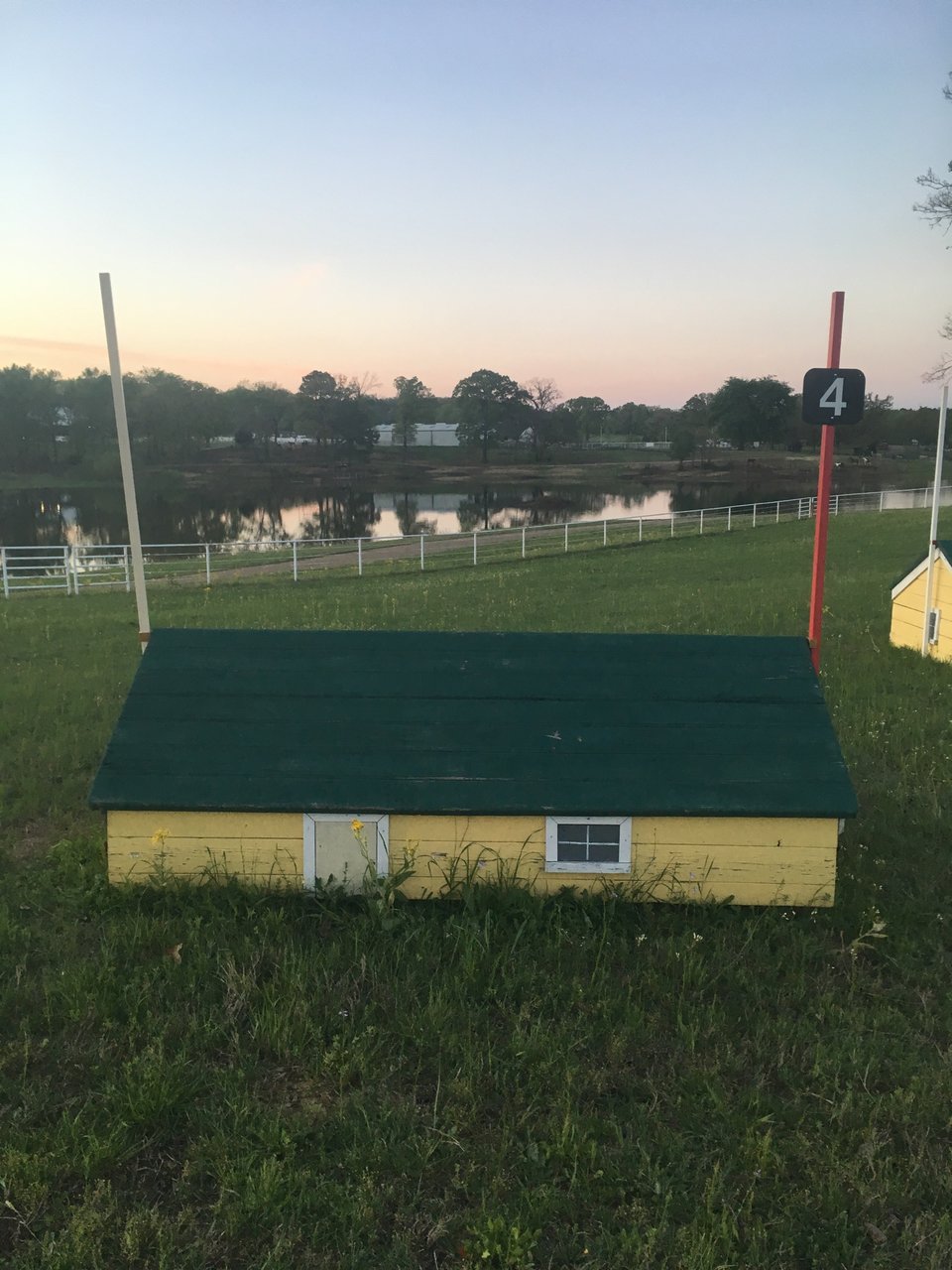 down a hill, then back up a hill and bending around right to another small house at 5. Yep, I like these little terrain questions.

Fence 6 was a trakehner, which caused it’s fair share of problems. After my mistake of not waiting at 4, I got him a little deep here at the trakehner but that seemed like the better choice. I must not have been that concerned about because I didn’t do my nervous “tap tap” whip thing that seems to be my go-to move when I’m freaked out. Just a little clucking. 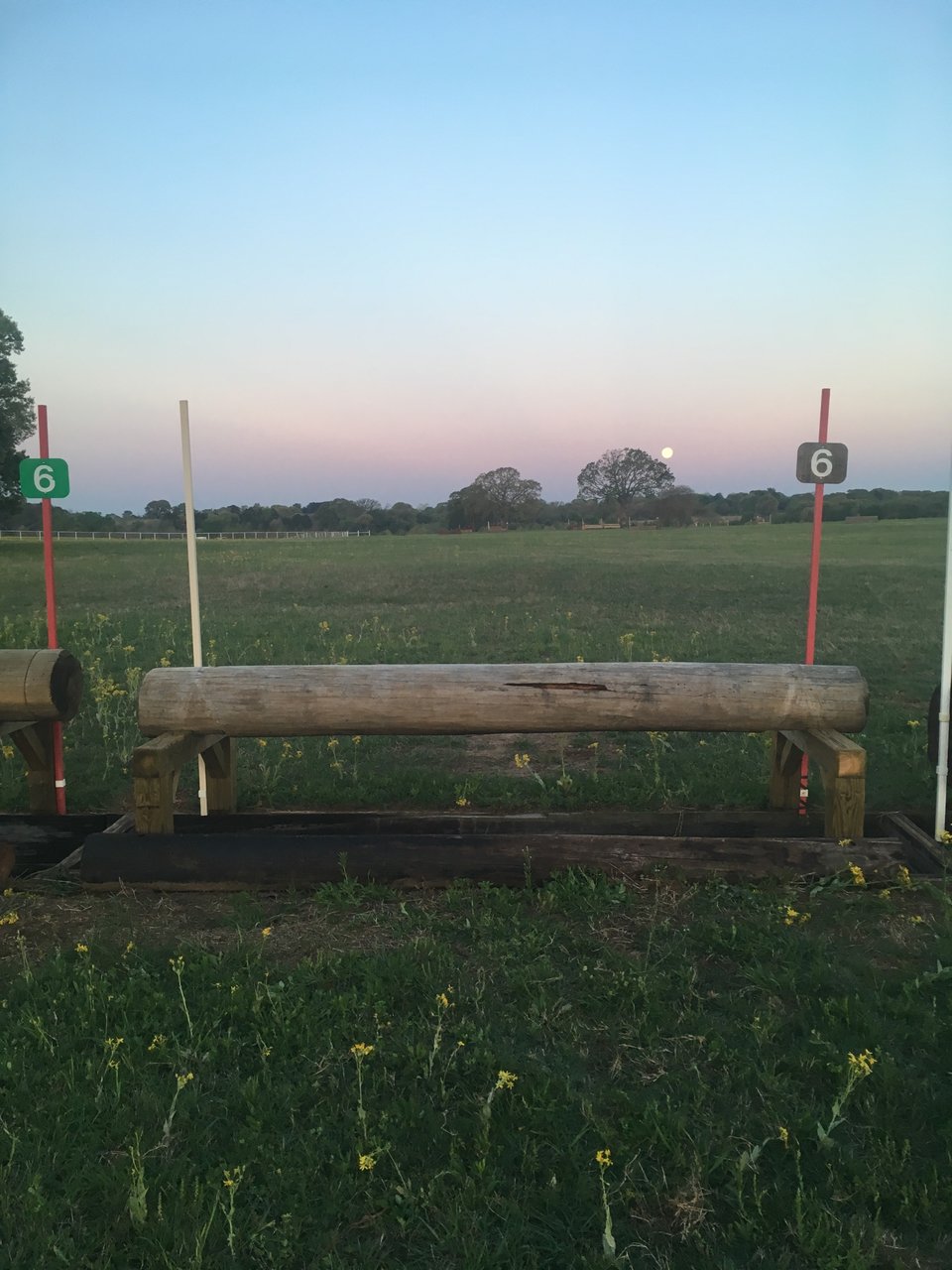 After that it was off to another terrain question at 7AB, a rolltop, 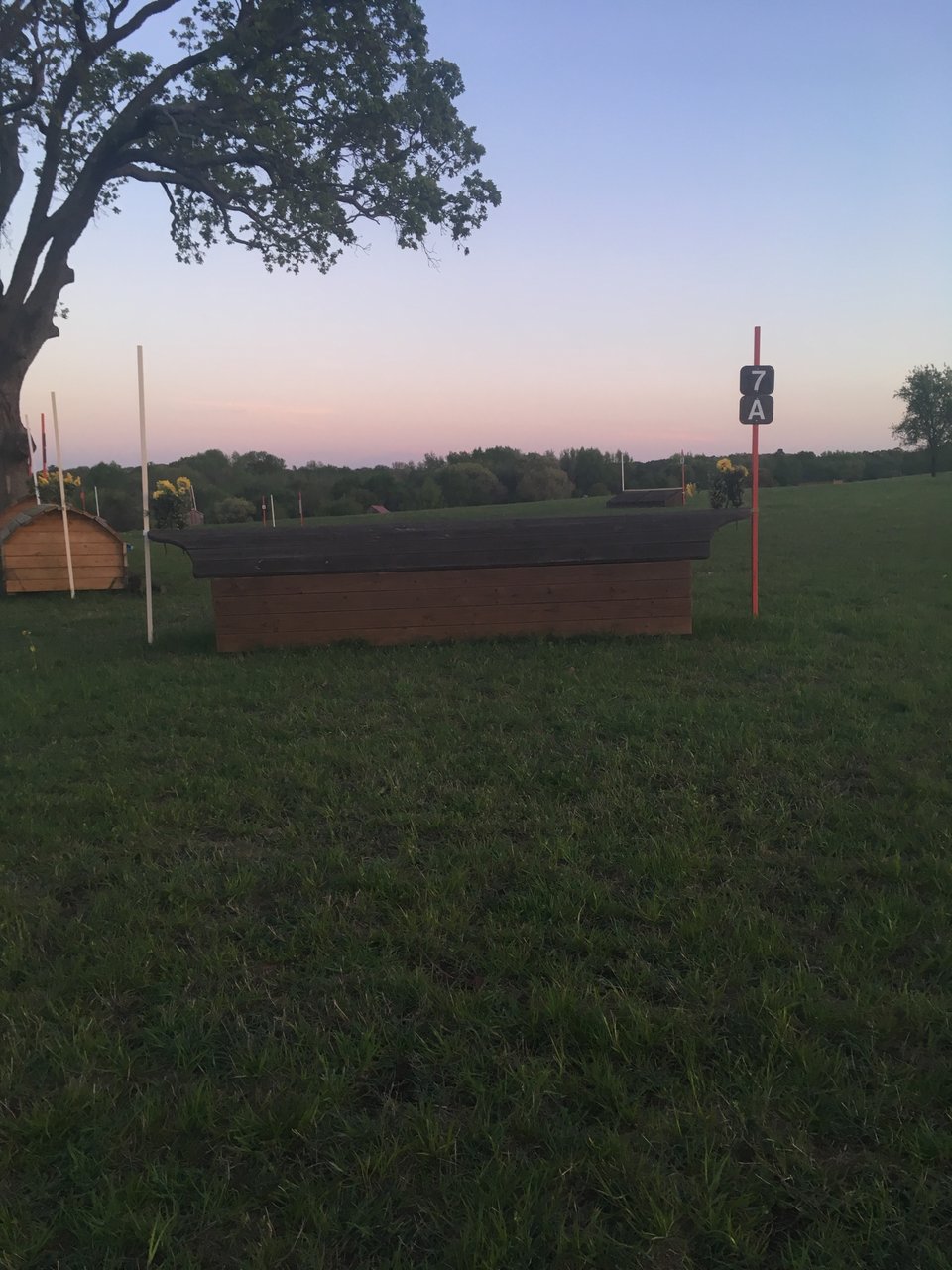 down the hill, to a small kind of slopey skinny upbank going back uphill. If you jumped the right side there was less slope and the bank itself was teeny. You could also save more ground that way, so that’s what we did.

It was an easy hop up the right side, then we whipped around quickly to the right to get lined up for the open oxer at 8. 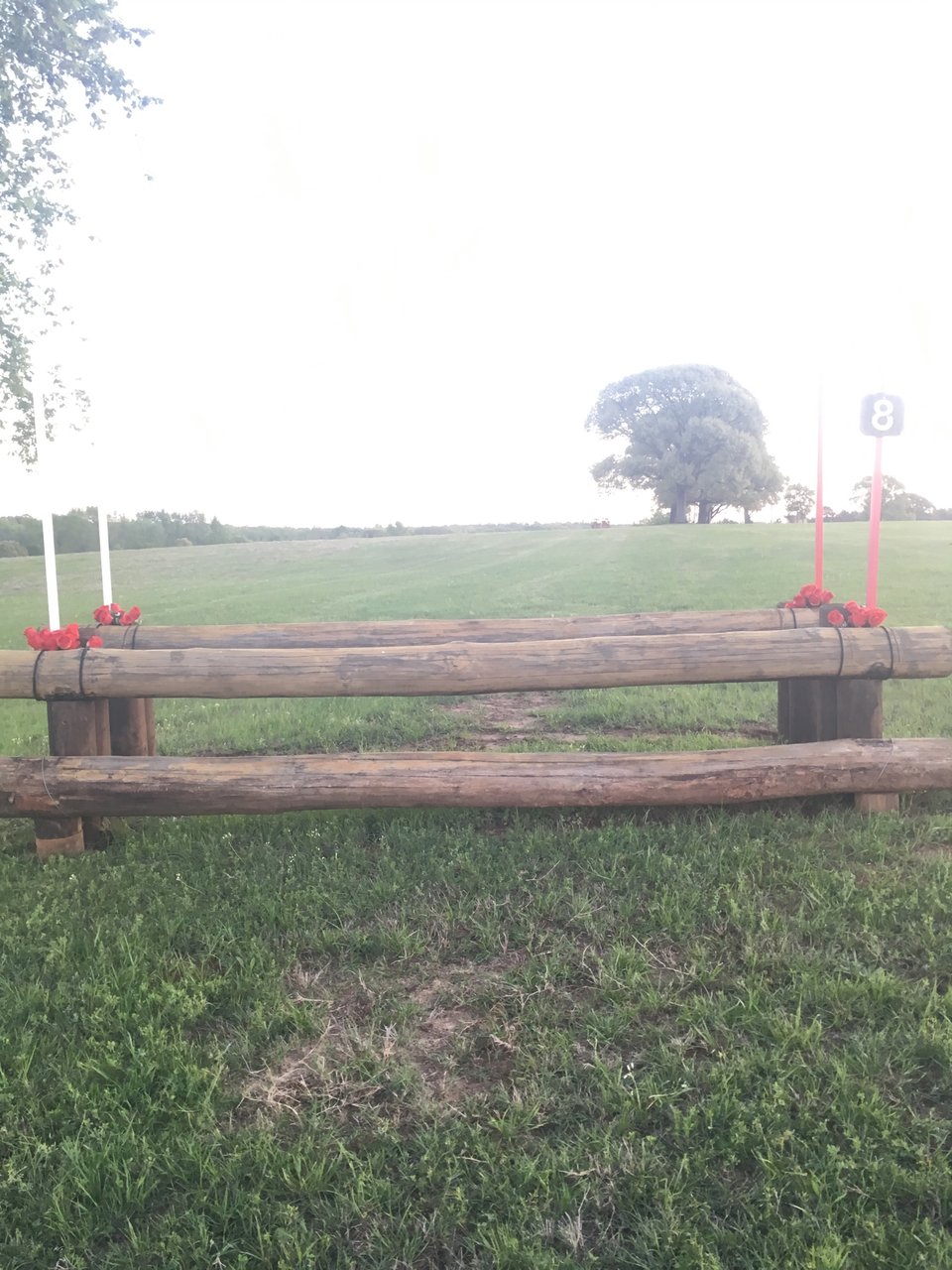 Then we headed to my favorite series of fences on course. We had a long slightly downhill gallop to the big red barn table, then had to hang a fairly quick left to the first water. Interesting question. It would be easy to fly past your line to the water if you came in too hot over the table or weren’t able to get a pretty quick half halt on landing. We jumped the table fine and he came back nicely when I landed and half-halted, so I was able to get him lined up for the water easily and allow him to come forward again. 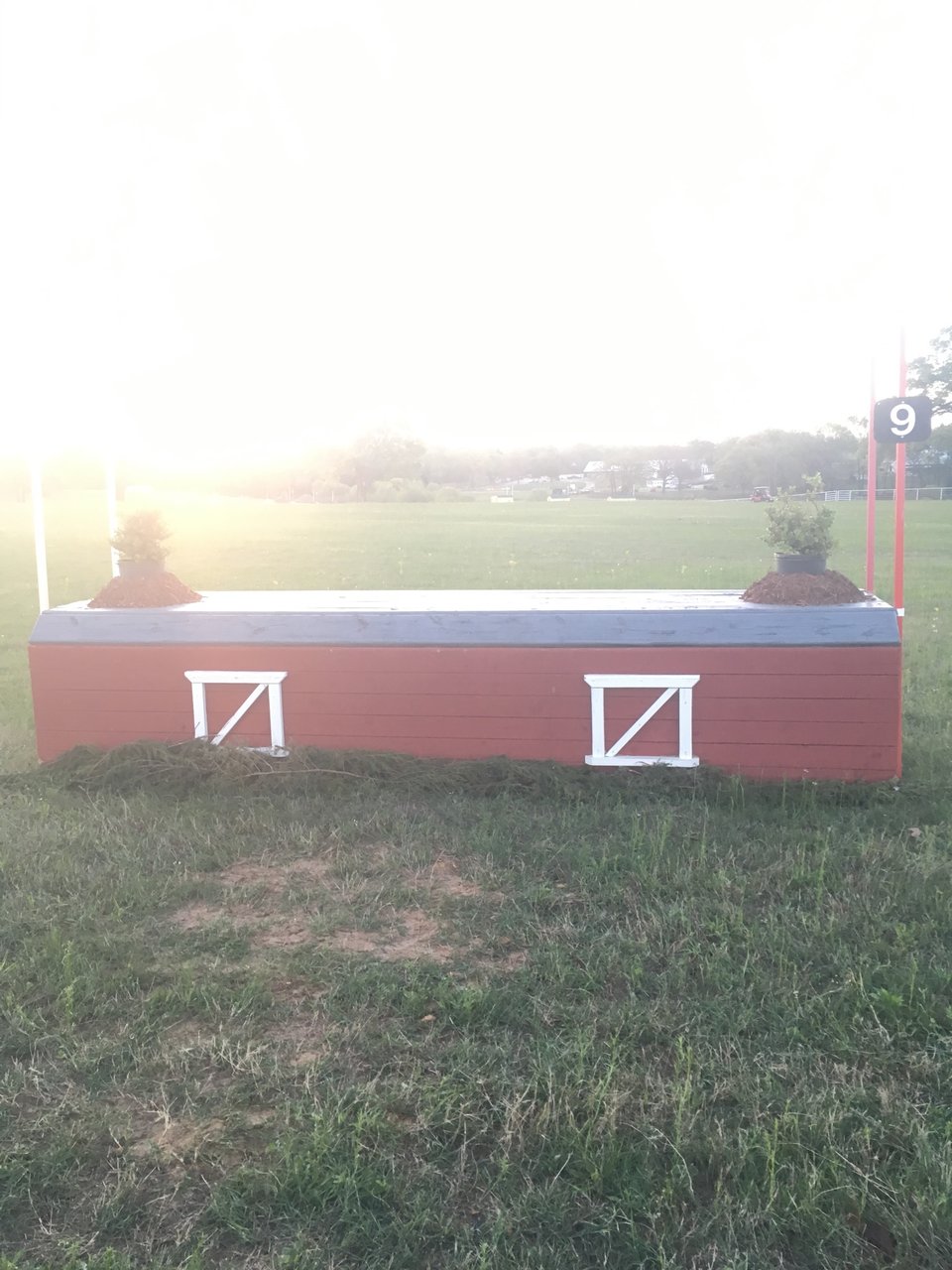 I was excited about this water, because it was a brush fence jumping into the water, 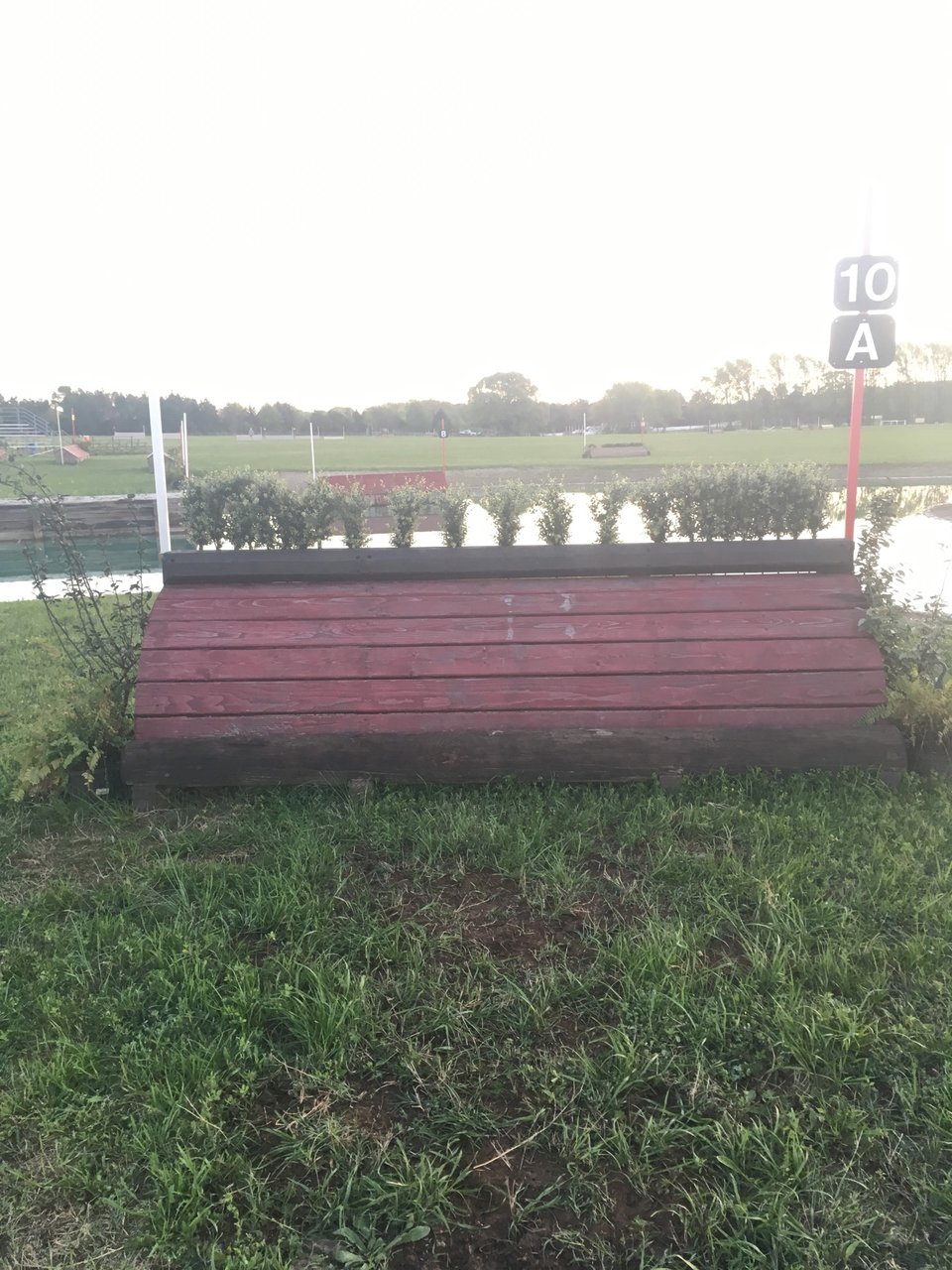 a little house IN the water (this is the first time we’ve had a jump in the water at Training! Finally!) 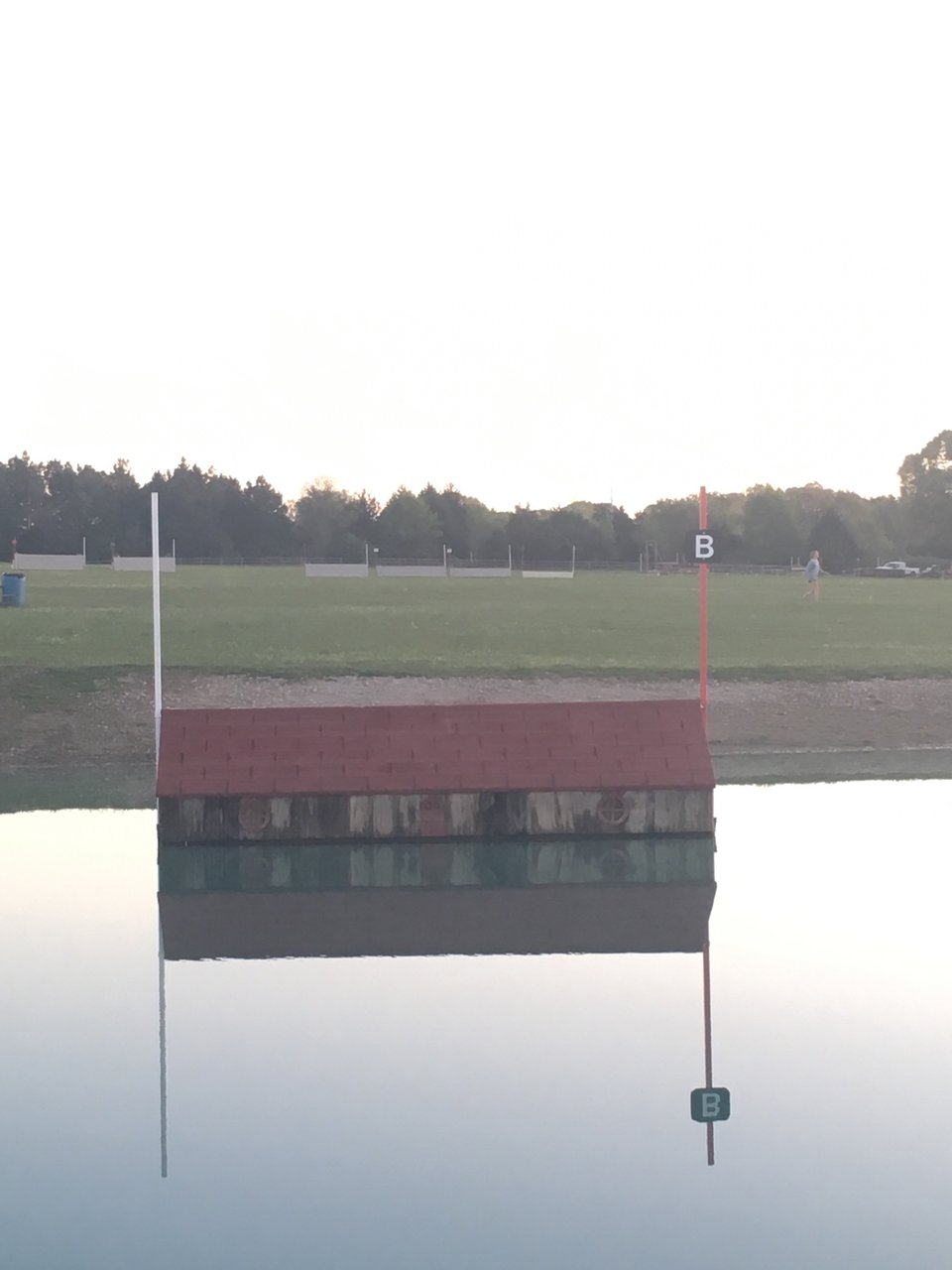 and then a bending line out of the water to another small house. I dig the combos, and this one rode really well. It was a super fun line. 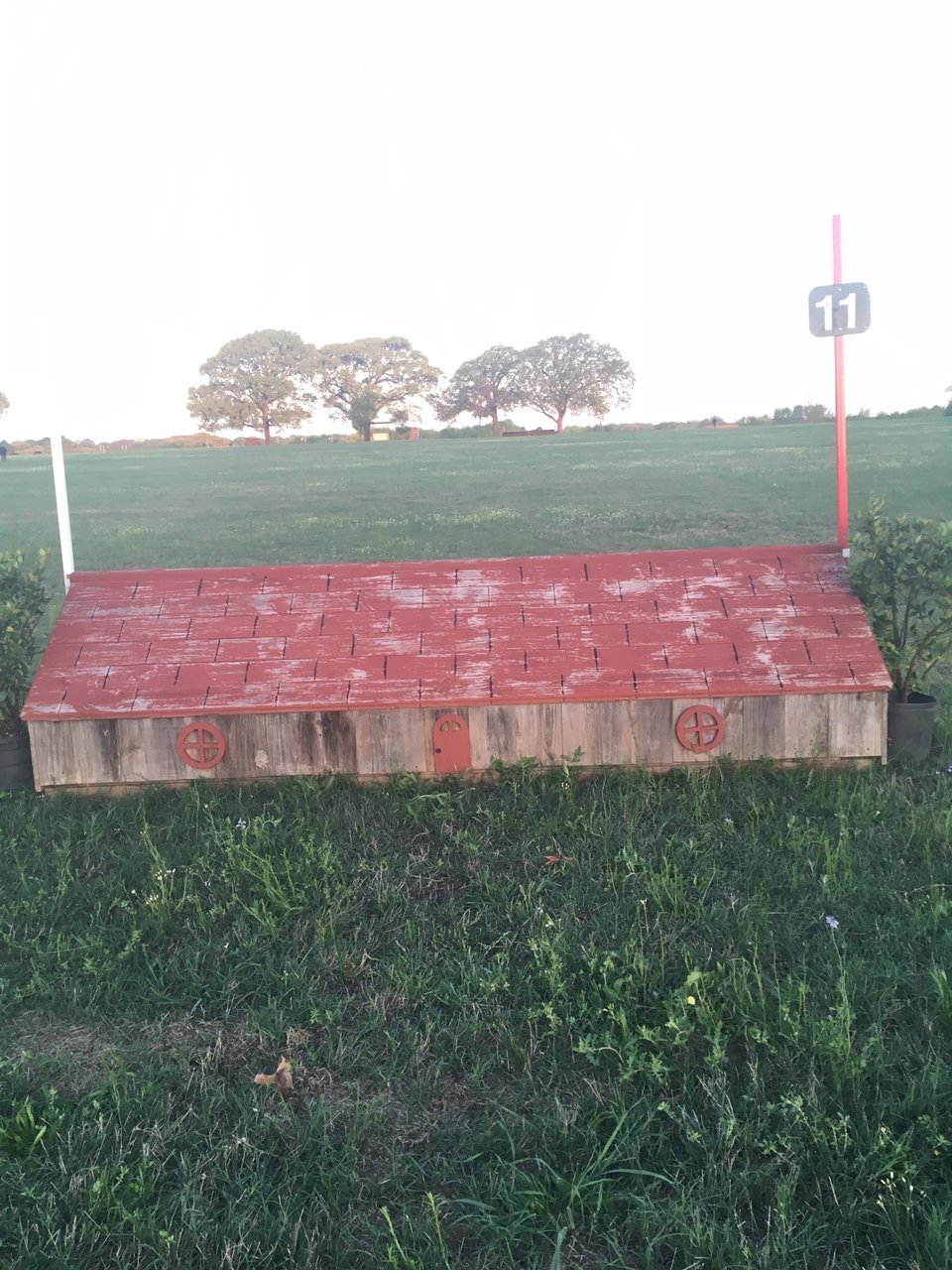 Then we had a long gallop back up and around to the ditch wall with a steep downhill landing. Henry got a little distracted before this one, passing a bunch of people on the left and a little covered seating area on the right. You also really cannot see the landing AT ALL since the ground falls away really fast on the landing side, so I really had to put my leg on and ride all the way down to it, but he hopped over it fine. Tellin’ ya, love these terrain questions.

From there you had to roll back up the hill to get to the second water, so it was important to not get sucked too far down the hill and end up wasting time having to gallop all the way back up again. We managed a decently handy turn back up the side of the hill (thank you, hind studs), galloping back up a little bit before rebalancing again for the jump into the water. I took too much of a pull here and jumped weak into the water, but Henny handled it fine. I landed kicking and we jumped out much better. This water was simple (which is probably why I rode it worse, I always do that crap), just a hanging log in 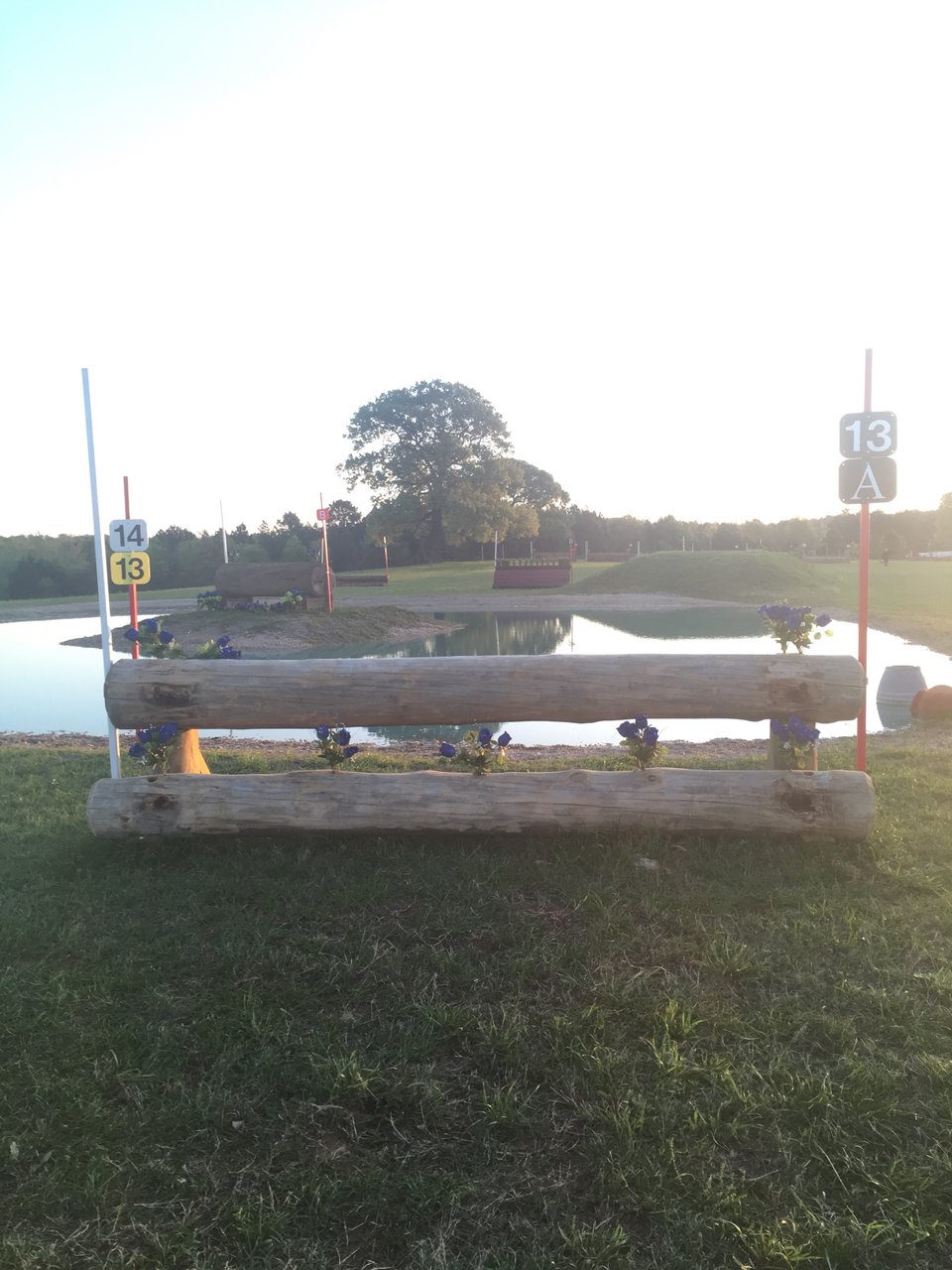 and a slightly angled brush fence out. 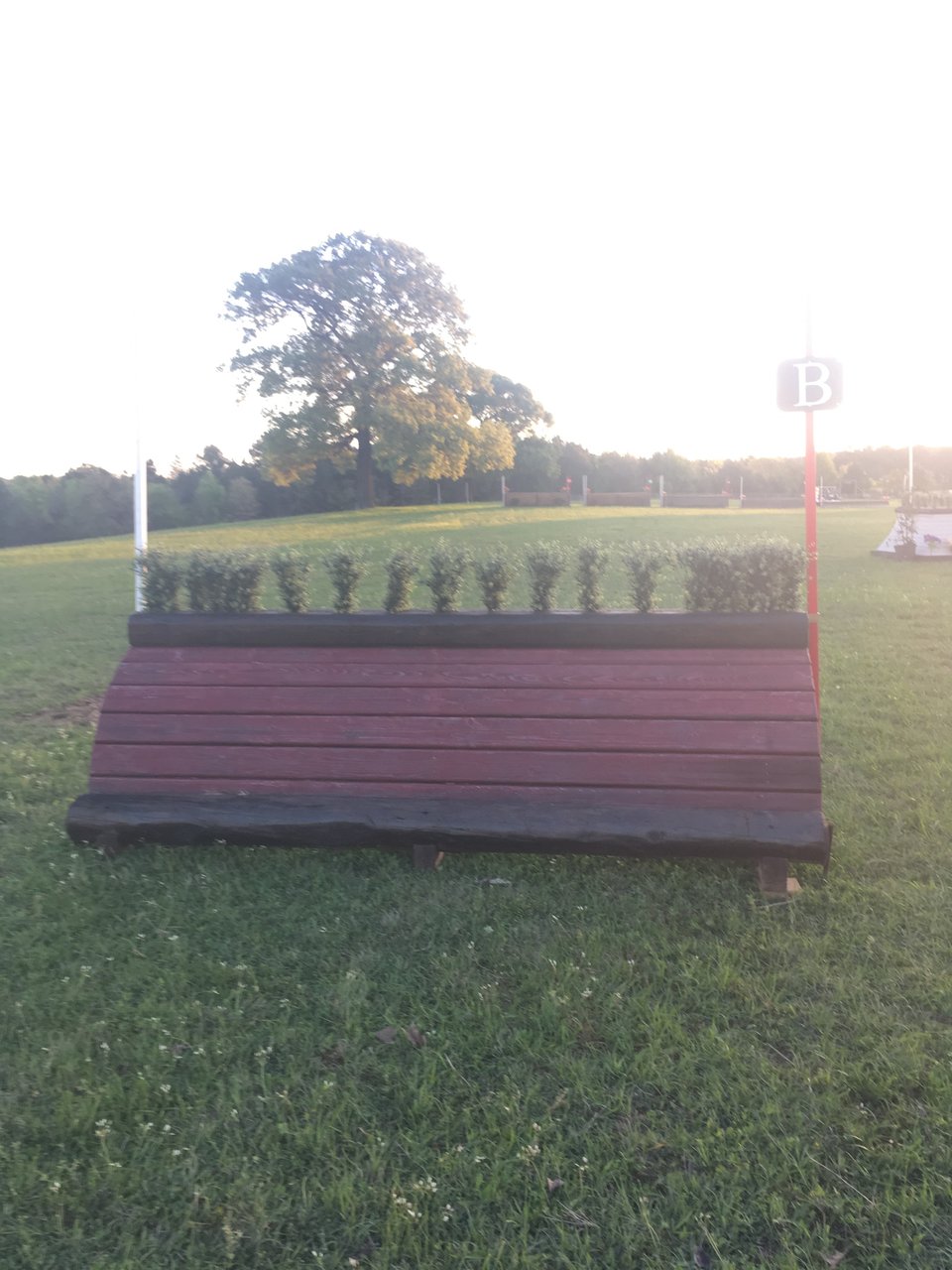 Then there was a plain little table 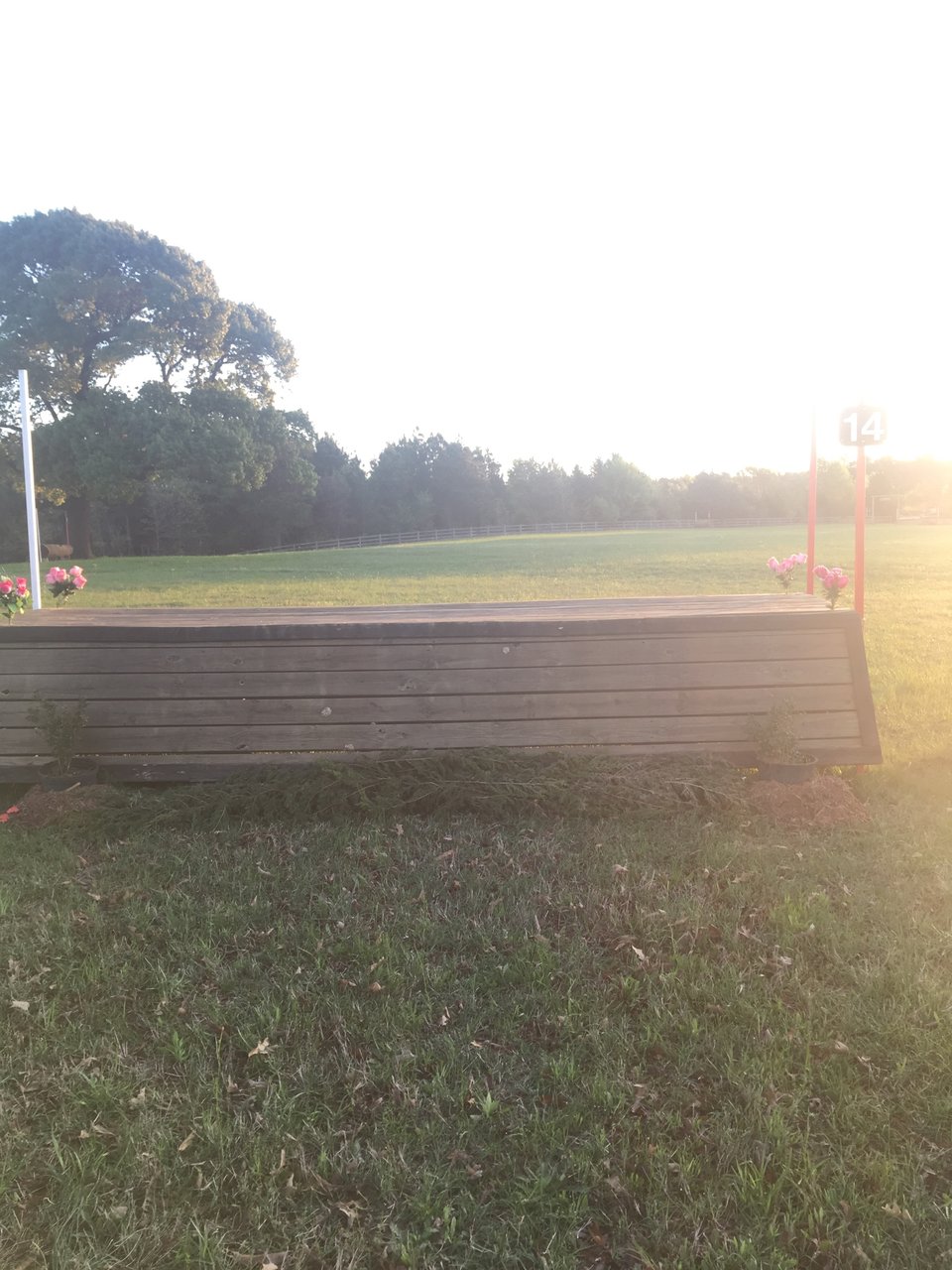 down to the Corral. We had to enter through the “gate” opening with an overhang, make a right, jump a downhill rolltop 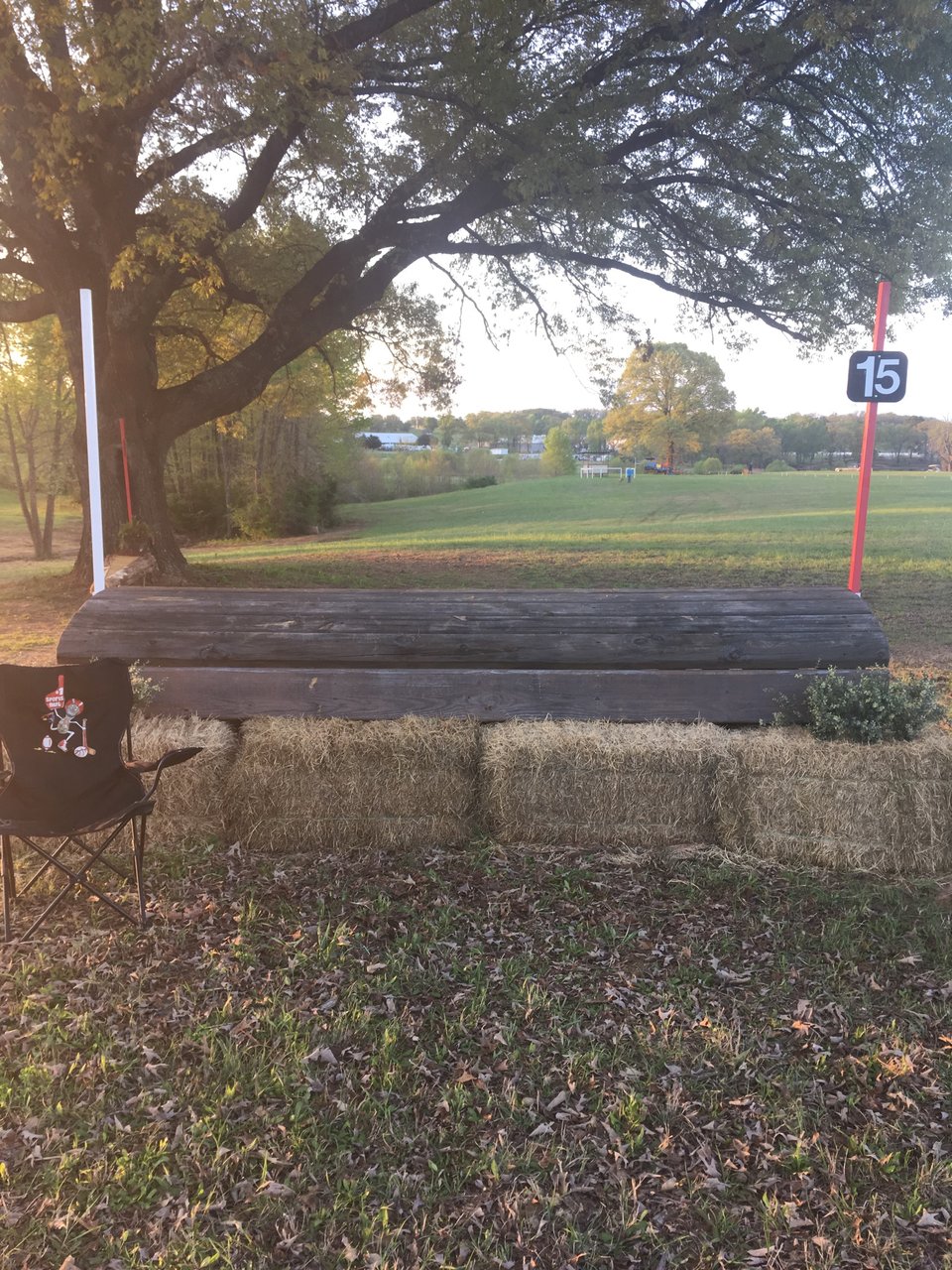 keep going down the hill, and hang a left to a corner at the bottom. I asked him to switch to his right lead before we got to the corral, so that I wouldn’t have to worry about it as we went in and turned to the rolltop. That one came up great… then around the tree and down the hill we went to the corner. This fence was directly facing the highway beyond, so I thought it might ride a little looky. I definitely felt a tiny bit of distraction when we turned to it, but not enough to pull Henry’s attention away from his job.

From there we went over the creek crossing to the last fence, a table. When you came off the creek crossing there was an Intermediate roll top right there that we had to go around, and for a split second Henry really thought he was supposed to jump it. For that same split second I really thought he was going to. Luckily a little left spur convinced him to go around it instead, and we looped past their fence to hop over our last table and through the finish. 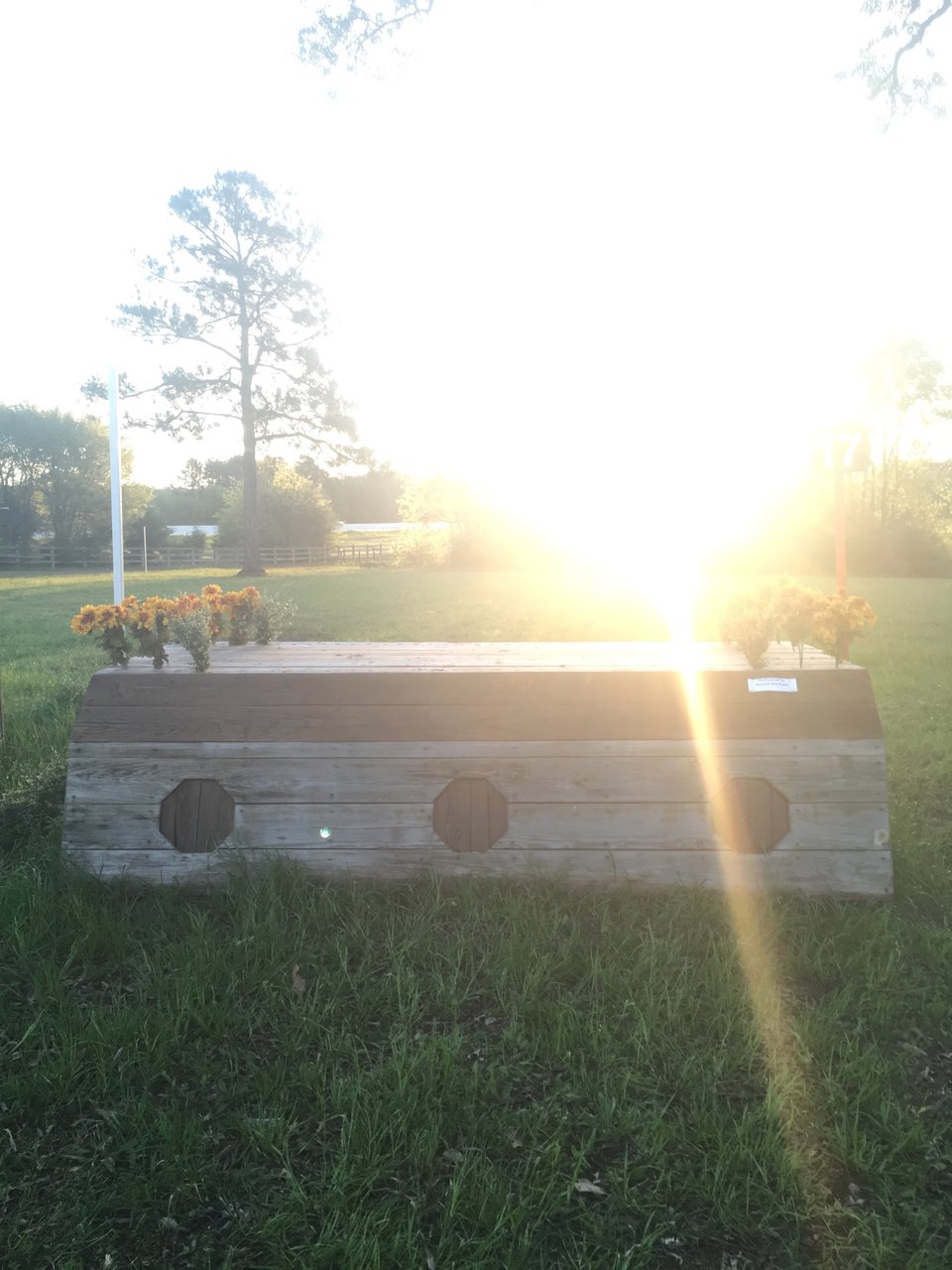 A few clips my trainer got:

And HELMET CAM! At least I remembered this, even if I forgot my watch. Maybe next time I’ll clean the lens.

There were a couple fences where I definitely rode like a monkey, but Henry was great the whole way around. He really is such a fun cross country horse, it makes the other two mediocre phases 100% worth it. I don’t care about ribbons, I care about learning to ride. He’s teaching me a lot, and he’s super safe, so it’s just such a blast.

When we crossed the finish I felt 90% confident that we were good on time. I thought I’d kept my average speed pretty darn close to the designated 450mpm, and I followed the exact track I had planned out to save myself enough ground to where I thought I had some breathing room. Not gonna lie, I was pretty damn proud of myself when they posted scores and I ended up being 7 seconds under Optimum Time. Not bad for no watch! Double clear!

Henry wasn’t even breathing hard by the time we were done (I sure was, so much damn pollen in the air I can’t even breathe out of both nostrils) and wasn’t sweaty enough to warrant a rinse. By that I mean he wasn’t sweaty at all. He was looking around like “that’s it?”. So, the horse is plenty fit, too.