On Wednesday when we arrived in Tyler I rode Henry in the dressage warmup and did quite a bit of canter work. That meant his brain came a little unglued and he was tense and over sensitive, so on Thursday we just hacked and stretchy trotted around. By the time Friday’s dressage ride finally rolled around, we stuck to what is now our standard warmup of w/t work only – no canter.  Henry was moving really well for him (thanks to the glittery loaner Devoucoux that you met in Episode 2 of The Shitshow) and felt about as good as I could have asked for. 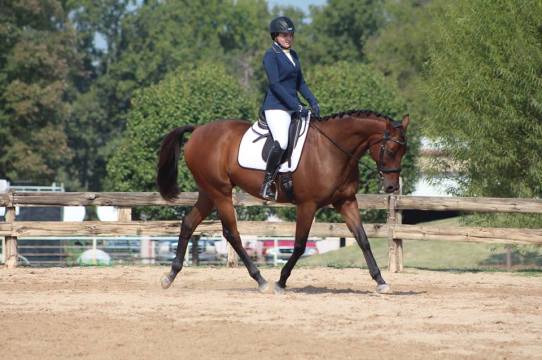 Our hack the day before seemed to work to reset his brain, because he was very relaxed and obedient in warmup. We were able to ask him for a little more connection, a little more forward, a little bit of lateral work, and we got a few really nice circles. Then we just walked and chilled out because it was getting pretty hot by then and Henry thought he might die of heat stroke. 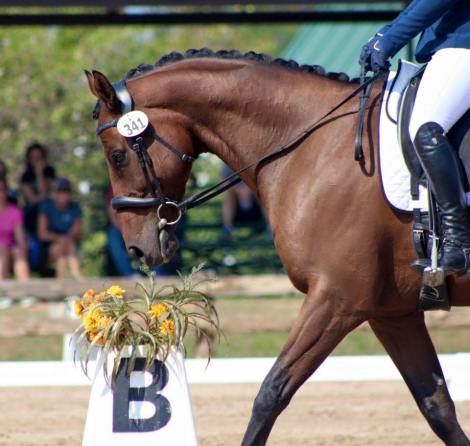 When we walked in the ring I felt Henry perk up just a little but he stayed relaxed and obedient. We picked up the trot, went past the judge and exchanged Good Mornings, she blew the whistle, and then into the sandbox we went.

I took a page from Emma’s book with the video and put in the scores and remarks for each movement, because she’s brilliant.

All in all I was pretty thrilled with his test. I let my accuracy go a little bit a couple of times for the sake of a calmer movement, and there were things that obviously could have been better but Henry held himself together unbelievably well in such a highly charged environment. We even got an 8 on a transition! He was shaking his head a little bit a few times – a bug must have somehow made it past the dense forest of squirrel hair in his ears – but he was polite about it and stayed focused. I actually found myself pushing him forward in the walk, whereas not so very long ago it was more a matter of trying not to break to the trot. Henny gets 5 gold stars for maturity on this one, I’m so incredibly proud of what a good boy he was. 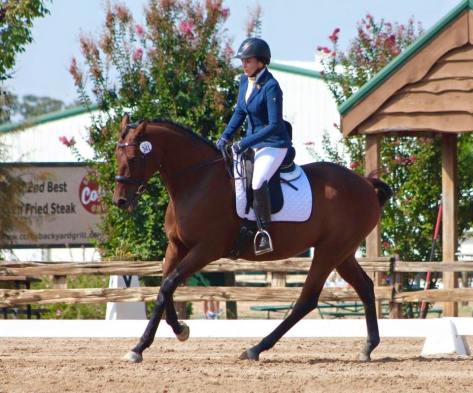 For as much as I disagreed with the comments on my test from Corona last month, I really spot on agreed with all the comments this time. AND we got the much coveted “needs more energy” remark!!! HA! On a horse that has historically been nothing but a ball of nervous energy in dressage, that’s an epic win in my book. If the judge thinks he looks too quiet, I’ll take it!

My goal score going into AEC was a 35 and we smashed that out of the park with a 30.8, our second best score ever. But more importantly, it really was the most relaxed he’s ever been in the rectangle. He exceeded all my expectations, especially considering we really haven’t done much of any dressage work for the past month or so. 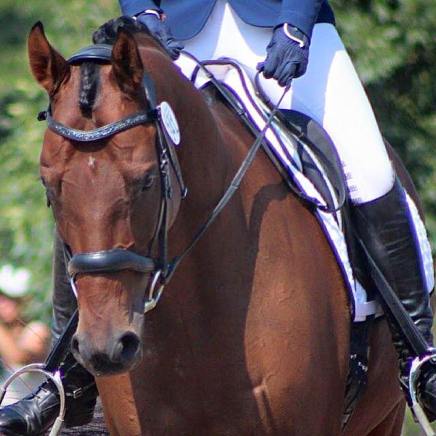 Our 30.8 was respectable enough to put us into a tie for 13th place after dressage, which is a good 7 places higher than I even dared to hope for. Best of all, 13th place put me solidly within striking distance for an individual ribbon, since they place through 12th. Remember how I said we would have to be incredibly lucky to get a ribbon? This is when I started thinking that maybe, just maybe, we could pull it off.

As for the team, after dressage Team Always be a Unicorn was ahead of the second place team by 5 points. Exactly where we wanted to be, leading right out of the gate and leaving all the other teams with nothing to do but hope we messed up. Now it was just a matter of hanging on to that lead with everyone else breathing down our necks. Nothing like a high pressure situation to make a national championship a little more exciting.