I guess it’s a good thing I like a challenge because that was the common theme of last week’s rides. It started on Wednesday, when Presto was uncharacteristically WILD. Like… WILD. Every once in a while he does that on lunge session days, but I’ve only ever had one other ride like that on him before. I really have no idea what spun him up, he seemed to just wake up on that side of the bed that day. Baby horses, ya know? 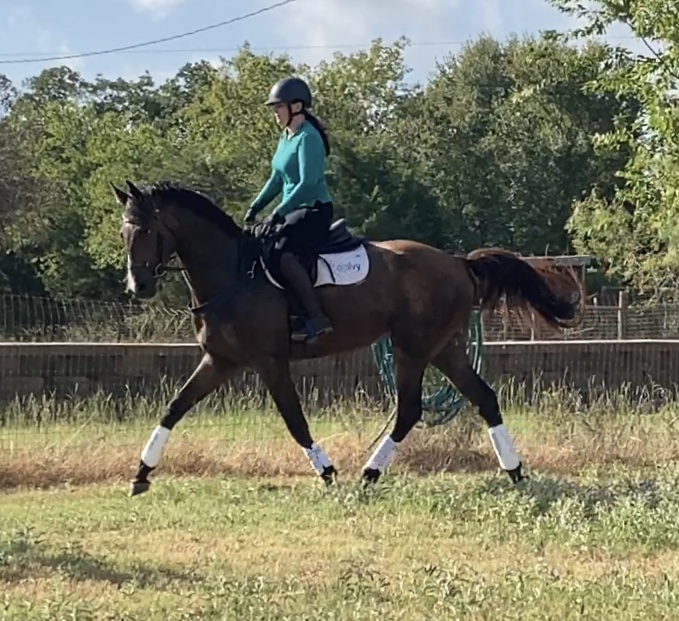 Thanks to the Pivo footage I could see that he spent the first 22 minutes flagging his tail like an Arabian. It’s way too hot for that shit, I dunno why he picked one of the hottest days of the year. Sometimes those baby brain cells just aren’t firing. He stared off into the bushes, he scooted away from invisible monsters, and at one point there was even squealing. I had to constantly circle or change direction or point him at a pole to keep his brain semi-engaged. His hamster had fallen solidly off the wheel and it took me 25 minutes to get him to take a deep breath and put an ear on me. But he finally did, and we made it out the other side. As soon as he gave me one good circle we called it quits. I wanted a lot of thoroughbred in my sporthorse, and I got it… felt like I was sitting on something on it’s first day off the track with a stick of dynamite up it’s butt. Hahahaha jesusgivemestrength.

At least he’s still cute even when he’s staring at invisible creatures and not paying a damn bit of attention to me or what he’s doing.

On Friday I took Henry for a “relaxing hack” out in the back, where he was tormented by moo demons. Not even regular moo demons, the dreaded WHITE moo demons (which are the very worst of all, according to him). They came crashing and bellowing through the brush on the other side of the fence from where we were walking, which caused Henry to come to an abrupt stop. I did finally convince him to walk up closer so he could at least see them better, but he was on high alert. There was possibly some prancing. Never trust a moo demon. So much for a relaxing hack.

On Saturday we just did poles, because on Sunday for Jump Day I had plans for a fun new exercise. A few weeks ago one of the pros on facebook posted an exercise with three jumps on a curve, all one stride apart, and came at it from the long side instead of on a circle. I’ve done exercises similar to this with poles and low cavaletti but not with real jumps. And I figured hey ya know, I’ll just put him in his sidepull to up the difficulty a little bit more. I’m a glutton for punishment. 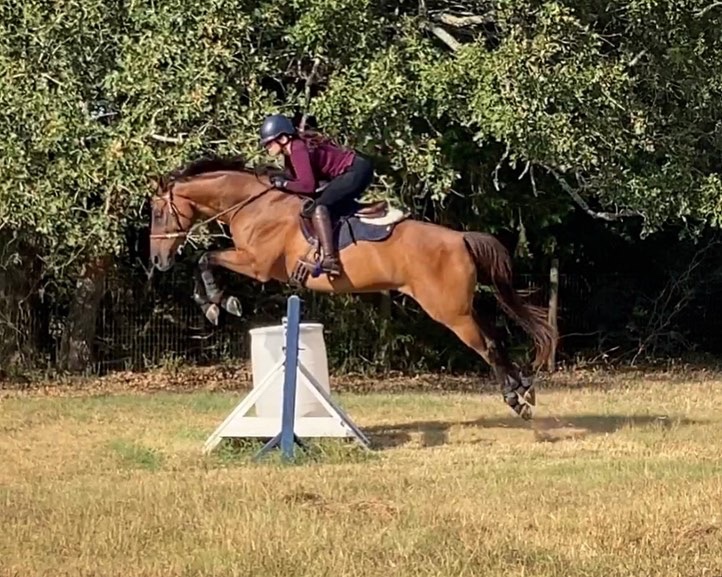 Really though, it was definitely a challenge but also do-able. It took me a few times through to figure out the ride I needed (very positive and a little bit “attacking”, keeping a steady bend and not losing the shoulder) and had a couple fly-bys in the process.

That was some weak-ass riding. Doesn’t work well that way, turns out.

But I did figure it out eventually and we jumped it both ways with success.

It needed more of a cross country type ride, which I thought made it a great exercise. I like it when I find things that I’m not successful at right off the bat… sometimes it’s hard to keep challenging yourself when you’re not in lessons and always riding alone, but I don’t want everything to be simple and easy. Not much point in that. This was a good exercise since it doesn’t tolerate complacent riding. Plus it made Henry be quick with his feet, which isn’t always his strong suit. It was harder than I thought it would be.

After I was done with Henry I got Presto out. Sundays are his hacking day, but instead of going out to the back of the property, we went to the grass ring again (where he’d been so wild on Wednesday) and just chilled. We walked, we circled, we stopped and stood in the shade, we walked around and investigated all the jumps.

And yes, by investigate I mean destroy. They go hand in hand with this one. He knocked rails down, turned barrels over and rolled them… whatever. I just wanted him to be relaxed in the space, and if knocking a few things around with his nose helps accomplish that, then fine. We walked around that ring for a while, then over around and into the dressage arena, where we practiced leg yields and lots of changes of direction just at the walk. Then back over to the grass arena, where we walked over some poles, did more circles, and then he was done. He definitely still felt a little perky, plenty of pep in his step, so if I’d tried to come back in here and do a serious w/t/c ride with him again it would probably have just caused an issue. There’s no good reason to put a lot of pressure on him or make demands. So we made it fun and light and easy and chill, just a positive experience. No big deal. Rome doesn’t have to be built in a day.

It was a super hot week for riding, all triple digits, I sweated a lot and ended up with more challenges than I’d really planned. Maybe this week can be a little more chill in all regards. There’s a little bit of relief coming in the form of a “cold front” (dropping the temps from 108 to 99 totally counts at this point), so that’s exciting. I’ll take what I can get!