Y’all know how much I love to dye things. Usually here it’s been tack, but way back in the day (and here is where I shall date myself a bit for sure) I also used to dye a lot of TS breeches. That was when they were a 95% cotton blend (which honestly sucked, that fabric was terrible and tended to fade badly over time) so they were really easy to dye with RIT in the washing machine. I would buy used faded ones for cheap and re-dye them. It has admittedly been a while since I tried to dye any items of clothing, though. The thought hasn’t even entered my mind, to be honest. And then someone posted on COTH about dyeing their old sunshirts, which Kelly was quick to try, and DUH I dunno why that thought had never even crossed my mind before.

I did have a couple old Kastels that I was getting close to retiring. One was originally white with purple zipper/accents but over the years had turned to a sad dishwater gray. The other was originally buttercup yellow but had faded to just a sad pastel.

Given my two starting colors, I settled on light blue for the white one and burgundy for the yellow. These shirts are a nylon blend, so you need a dye specifically for synthetic fabrics. The COTH poster and Kelly both used the RIT DyeMore synthetic line, so I stopped there first. They had a light blue, so I got that, but they didn’t have burgundy and I didn’t particularly care for their other colors (or wasn’t sold on how they would look over yellow). So after some research (thanks, The Googles!) I decided to try Jacquard Acid Dye.

The blue arrived first, so the white shirt was the first victim. These types of dyes require a stove top method, so you need a big pot (I used our soup pot because it was the biggest one we have – it worked fine) and a stove and a plastic or metal utensil to stir with. I followed the instructions on the bottle exactly, pre-wetting the shirt, getting my huge almost-boiling pot of water (with the bottle of dye and a splash of dish washing soap) ready, and then in went the shirt. 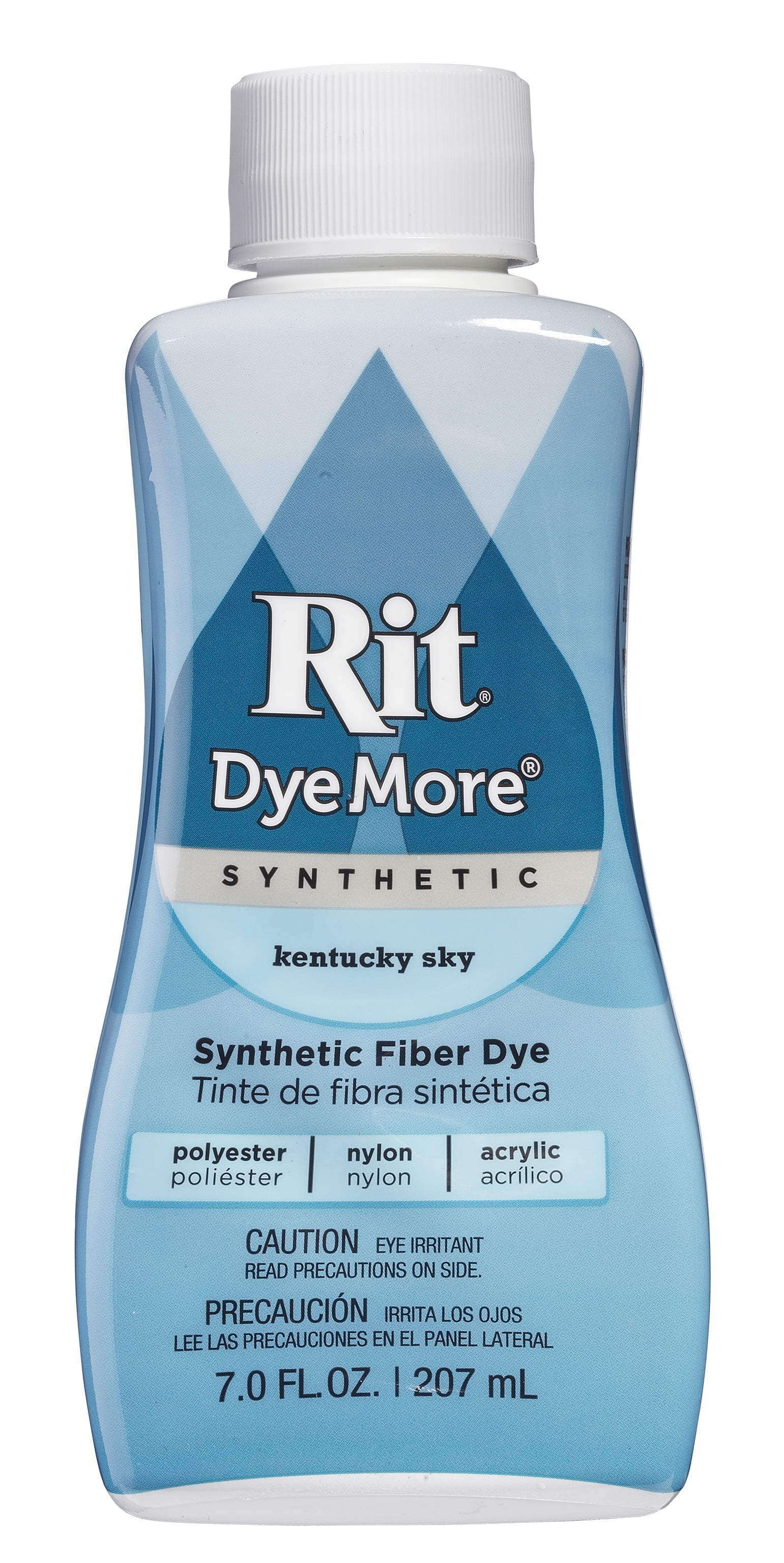 It requires some effort as far as regular stirring, and keeping the temperature of the water steady. The super hot water is the crucial element that you need for the dye to work, so you will have to be close-by and available to keep a pretty constant eye on the pot. I did make a bit of a mess on my stove top when I splashed some water out during my stirring, but it cleaned up fine. The color was a bit slow to get to it’s full blue, so I kept it in for 45 minutes (remembering of course that colors look slightly darker when wet, so I wanted it to look just a bit past the color I ultimately was trying to achieve).

Once it was done I pulled it out, and again followed the instructions for rinsing/washing (it’s all on the bottle and Kelly talks about it in her post so I won’t repeat it again) and this was the final result:

Which in the sunlight is a really pretty sky blue (the color is called Kentucky Sky, which is a perfect name for it).

With impeccable timing, my burgundy Jacquard dye showed up the next day. Admittedly I was really looking forward to this one most, because I’ve wanted a burgundy sunshirt for a long time but either a) didn’t like the tone of the ones I found (too red) or b) just couldn’t justify yet another shirt. 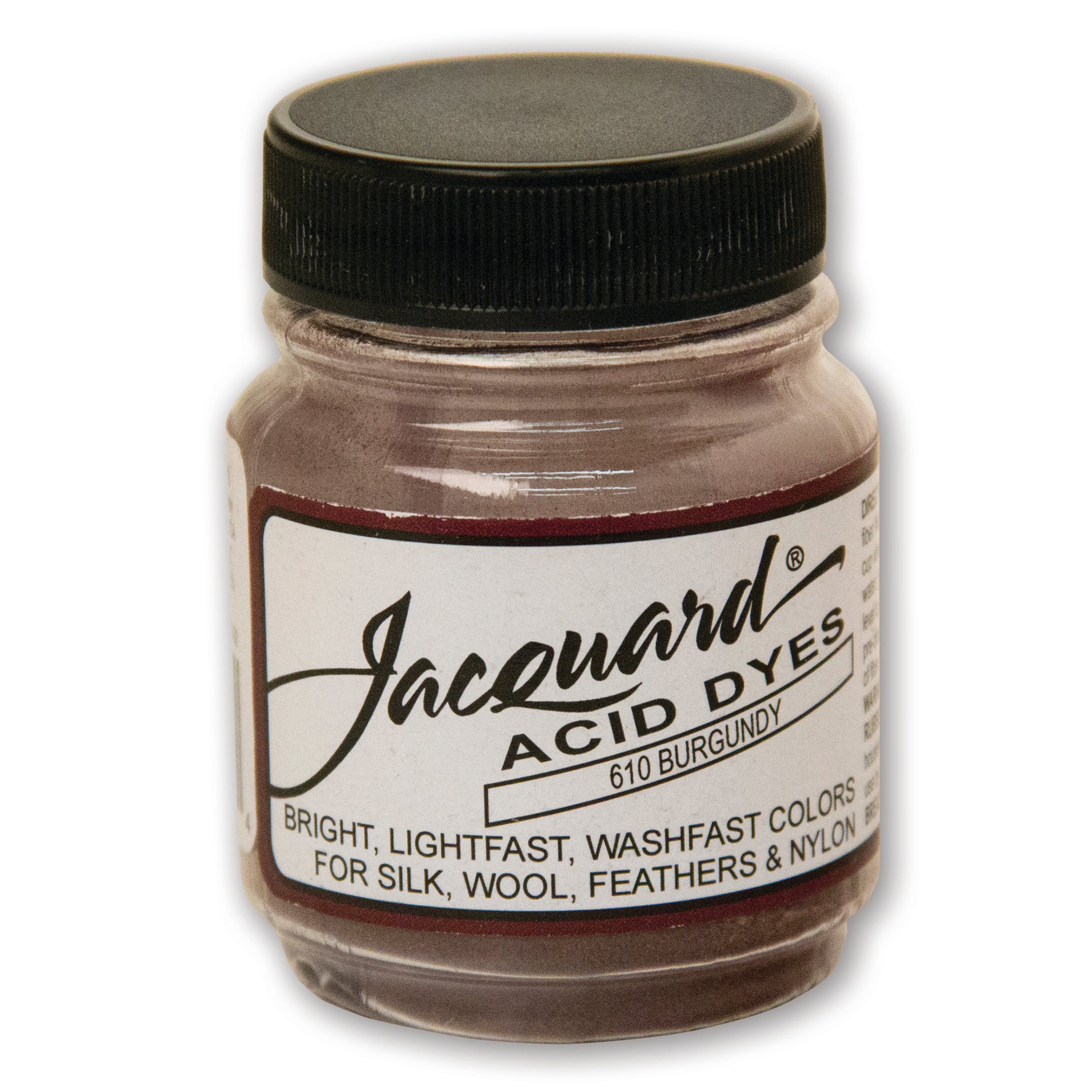 The Jacquard dye is definitely different from the RIT. The RIT is a liquid and comes in a bottle – all you do is add the liquid to your water (plus the bit of dish soap). The Jacquard is a powdered pigment, which you add to the water along with 1/4 cup of vinegar (the vinegar is the “acid” in this situation – don’t be scared off by the “acid dye” name). The Jacquard is available in a lot more colors, but otherwise they’re quite similar as far as process goes. Again I prepared the dye water exactly according to the directions on the label. The shirt went in, and immediately I was like OH YEAH HERE WE GO! Right off the bat it was already a mauve color.

But of course, I was looking for a deep merlot, so I let it keep going. I expected it to take the full 40 minutes to reach that darkest pigment that I was looking for, but honestly… it was there in about 20.

When I first took it out of the dye I thought maybe I had gone a bit TOO far, it almost looked dark purple, but by the time I was done rinsing and washing/drying, the color was absolute perfection. Exactly the deep gorgeous merlot burgundy shade that I’ve been looking for.

It seemed like a waste to just toss the rest of that gorgeous dye down the drain, so I quickly went and raided my closet for something else to toss in. I came across an old pair of charcoal For Horses tights that I didn’t really love because they were gray, so I just kinda shrugged and thought… why the hell not. The label was long gone so I wasn’t sure what the fabric content was but I figured worst case scenario they were mostly poly and the dye just wouldn’t take. I suspected they were more of a blend though, so I had a hunch that they would at least take some of the color… spoiler alert, it actually took a lot.

Of course, since these started out as a deeper gray that had blue-ish tones, the breeches went more toward the purple side of the spectrum by adding burgundy. I only left them in for 15 minutes, because by that point they had gotten to a really pretty dark eggplant color (yet another color I’ve been trying to find for a long time and haven’t succeeded). Much prettier than gray!

I’m super pleased. These are 3 items of clothing that I was pretty close to tossing or giving away and now I kind of love them even more than I did originally. Especially the merlot shirt. I’m obsessed.

This isn’t a very hard process either, just… follow the instructions. There are also about a billion youtube videos about it, if you would feel better having a visual before you try it. For me, I preferred the Jacquard dye over the RIT, at least for these mostly nylon sunshirts. It reached it’s peak color in about half the time and IMO is more vibrant, plus they have a wider range of colors. It does require a little vinegar additive though, which might be a deterrent if you don’t have some or don’t want to buy some. Ultimately they both got the job done in the end, and both brands are about the same price ($4-5) depending on where you buy from.

Some things to keep in mind before you start dyeing everything in your closet:

If you have any old shirts that need new life or you just don’t like the color of, this is a pretty cheap way to revamp them. Overall I’m super pleased! And kind of sad that I don’t have any more crappy old shirts to dye…