I guess my brain is just stuck in the breeding groove this week but I found myself sitting here thinking “if I could have any mare in the world, who would it be, and who would I breed her to”? Admittedly, I do this probably at least once a year. I’m a weirdo like that. It’s kinda like that classic “what’s your dream horse” question, but with another layer of critical thinking, because now you have to come up with the recipe, not just the end result.

So here are the rules: if you were breeding for yourself, a horse that you would keep and raise and eventually ride – what parents would you pick? Preferably something well known, since that makes it more fun, but hey… go wild.

I believe very strongly that the most important part of the breeding equation is the mare. I also know that if I was breeding for something for me to keep and ride myself, I’d pick different crosses than I would if I was breeding to sell/for 5* level. So I’ll start with the mares. Yes plural, because I have 2 that I can’t pick between: Classic Moet and Fischerrocana. They are a bit similar in that neither of them is particularly remarkable or flashy. They’re both plain, they’re both average movers and jumpers (ie something I could actually stand a chance of being able to ride), and they both have a lot of thoroughbred blood. But what they also both have is rideability, trainability, grit, and a lot of heart. The description of Classic Moet on Janelle Price’s website is enough to seal the deal for me:

Molly would, if she were a person, come from Swindon ( Or West Auckland for our NZ followers), be a couple of stone overweight, have several tattoos, wear a too tight leather jacket over skintight leopard skin pants and have a boyfriend with an IQ of 10 who is a club bouncer and 4 children by 4 different fathers. Molly is a legend but a kind of rock and roll one like Mick Jagger as opposed to the Princess type!

And since, in this particular fantasy, I’m breeding for something to keep for myself, that means I’m not looking to make a 5* horse. I’m looking for something that can forgive mistakes, get me out of trouble, and is always forward-thinking and looking for the flags. Something with 3* talent, with cross country as it’s strongest phase because I don’t want to die.

For Classic Moet, I’m thinking Irish. Classic Moet has a bit of an odd jumping style, so I’m going to stick with one that produces more conventional horses stylistically, and one who’s offspring seem to be pretty rideable on the flat. I’m also gonna go for the weird color, and I generally DETEST breeding for color as a general rule but this is one I would pick even if he was plain bay. Tullabeg Fusion is also about half TB, so I’d still have a horse with a lot of blood.

And since I’m in charge here in this fantasy, I’m gonna go ahead and say that the resulting foal looks like this

Fischerrocana is a really fun one, too. She’s more conventional than Classic Moet, with a bit less thoroughbred blood. I love that she seems like she would absolutely turn herself inside out for her rider – those are the best kind of horses, especially when it’s a mare. 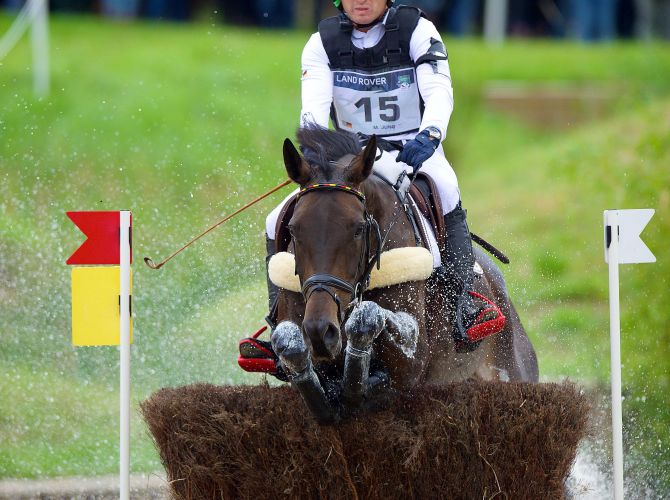 Again, if I was breeding her for 5* I would make a different choice, but since we’re still playing by the rules of “something I have to be able to ride”, I’m going to go with my favorite boy Mighty Magic. Y’all know I’m biased, and he produces really good cross country horses. They’re just my type, from goofy temperament to how they’re built. He should add a little size, and it might end up a little chunky, but it should also be a heat-seeking missile for cross country fences and happy to jump them with or without my assistance.

Interestingly, Classic Moet has already had an Upsilon foal (via ET), an excellent choice for 5* IMO, and one that I probably wouldn’t have a chance in hell of being able to ride myself.

So, who would your choices be? A hunter? A showjumper? An eventer? A western horse maybe? Tell me your recipe!