Although I’ve been giving priority to all of my mindset and mental training books lately, I’ve still managed to squeeze in a few others! One I was admittedly slightly hesitant about, because it’s written by Denny Emerson, and I’ve historically had a few definite disagreements with things Denny has written on his facebook page. To be fair, he’s one of the few top names in the sport who puts himself out there constantly, never shy to offer an opinion, so it’s pretty natural that I don’t agree with everything he says. That would be true of anyone if they shared every opinion they had.

Denny is an indisputable legend in our world though, and I do agree with him whole-heartedly on many, probably even most, things. The importance of conditioning, his stance on thoroughbreds, his dislike of gadgets and harsh bits, etc. So when his new book, Know Better to Do Better, came out, I was curious. The line under the title says “Mistakes I Made with Horses (So You Don’t Have To)”. Which… if that’s designed to pique my interest, it succeeded. Of course I would love to hear about the things that older, established horsemen have learned the hard way. I make plenty of mistakes on my own, I would love to learn from someone else’s lifetime of experience.

When I first started reading through the book, I thought that it was a bit more basic than I was hoping for. There’s a lot about how to choose the right horse, generalizations about different breeds, basic horse management, and all that core stuff. Someone newer to horses, or maybe someone who has mostly been raised in a lesson program rather than coming up through the working student/barn management route, would probably get a lot more out of those sections than I did.

I always love to look at a book’s Table of Contents, so here you go!

Then we started getting into the “Horse Training” and “Rider’s Emotional Makeup and Character Traits” sections, and here is where Denny won me over. Well okay, there was one part where he briefly tried to address the common issue that amateurs have – finding time to ride – that I found really lacking. I don’t really have that problem, but a lot of people do, and I feel like he mentioned it but didn’t actually offer any advice on how to work within a time constraint. That was disappointing.

But in the Horse Training section he talked a lot about the importance of having a horse that is fit enough to do it’s job comfortably, how best to communicate with your horse, tips on handling tense or nervous horses, warming up, clinics, developing a better eye for a distance (spoiler alert, its about the canter), etc. I got a few good tidbits out of this section. Maybe not earth-shattering things, but definitely good reminders that I always need to hear. 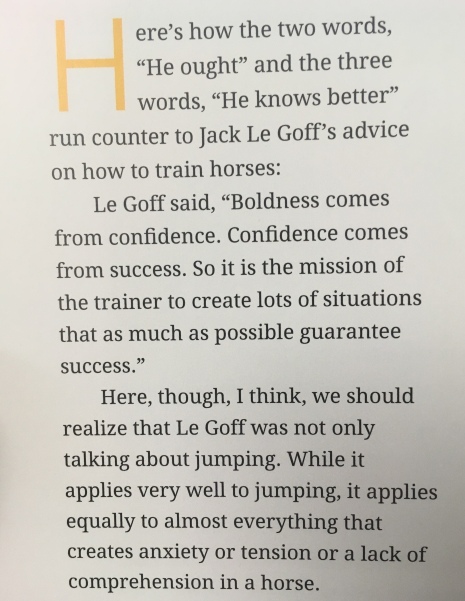 The best part to me, and the part that I think ANY rider will get something out of, is the Rider’s Emotional Makeup and Character Traits section. He starts off by addressing the fact that humans are predators by nature, and horses are prey animals by nature, and what this means when it comes to how we interact and communicate. Understanding this, and all that it entails, has been so incredibly vital to me, and something that IMO often isn’t addressed enough in the English disciplines or riding books in general.

He also talks a little about overcoming fear, although I don’t think that part is particularly helpful compared to everything else I’ve read on the subject, and regaining confidence, which I DID find helpful. My favorite section in this chapter was the “Teach Him vs Make Him” part, addressing our mindset when it comes to working with and training our horses… I found myself going YAASSSSS THIIIIIISSSS the whole time.

One thing Denny does always talk about, throughout the book, is the importance of long marching walks and how to put a good foundation of fitness on a horse – something I 100% believe in and do with my own horses from day 1. He’s from the “old guard”, the days of the long format, as well as being a long distance endurance rider, so his opinions on stuff like that should be highly regarded. It’s something we’re losing a bit in the modern day version of this sport, I think.

As you move through the rest of the book, there are sections addressing rider fitness, moving up the levels, talent vs work ethic… on and on. If you want a book that covers a huge variety of topics, this one is it. There are several small inlaid sections about particular horses he had during his career, and things he would have done differently with them if he knew then what he knows now. Stories like that are always super interesting to me, because I’m sure anyone can identify with those “if only” feelings.

As with Denny’s facebook page, there are parts that I don’t totally agree with, but way more parts where I found myself uttering an amen. He’s never afraid to lay it all there and say what he means, for better or worse, and he doesn’t sugarcoat things. Agree with him or not, you can’t deny the fact that Denny is a horseman, through and through. Putting the horse first and being morally and ethically responsible were undercurrents that ran throughout the entire book. Denny also understands that not every rider is or wants to be an upper level rider, and doesn’t think that automatically means they’re “less than”. I have nothing but the utmost respect for both of those viewpoints, increasingly rare as they are. I think Denny is better at seeing the big picture than many of the riders who are still at the peak of their careers.

There were a few sections where I found myself wishing he’d said more, or addressed the topic in a more in-depth way, but in a book with this much variety, I can see how that would have gotten quickly out of hand. Overall I think that a rider of just about any level or discipline would find something helpful contained within the pages of this book. There’s just so much knowledge coming at you from all directions, it really does touch on just about everything.

11 thoughts on “Know Better to Do Better: A Book Review”