If you thought the story about the Cat Shit Robot was entertaining, hold on to your britches, because here we go again. 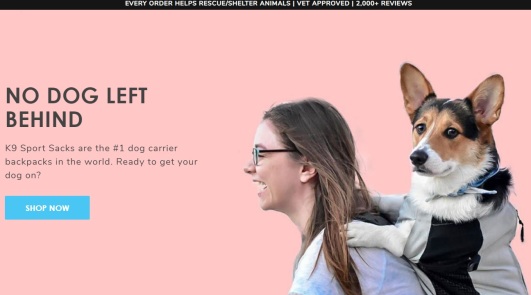 If there’s one thing that has become crystal clear as of late, it’s that facebook and Instagram advertising work REALLY WELL on the SO. Like that night he came home with a bag full of “soups” for the cat, because there was an ad on his Instagram for them and he thought it looked like something Grem would like. Nevermind the fact that he had to go to 3 different stores to actually find those exact ones. He sent me a facebook message last week about a backpack that had popped up in his feed, made to carry a dog around in. Of course, the ad depicted a corgi in said backpack. We have one of those! Surely our corgi needs a backpack too! I told him he was completely insane, and about 30 seconds later he informed me that he bought the black “deluxe” one. Honestly, I expected nothing less.

I will say, the corgi is the absolute worst when it comes to walking.  He loves the IDEA of going places, but he hates actually… walking. Every time we try to go on walks in the neighborhood, he gets about 2 blocks before he just lays down and refuses to move anymore. Usually this means that one of us is stuck carrying him home, because you sure can’t drag 35lbs of corgi anywhere that it doesn’t want to go. We also have tried taking him hiking a few times, which he’s slightly more enthusiastic about, but still… you’ve got maybe 20 minutes before he’s no longer participating. Usually this means that the corgi ends up not getting to go on outings, or that none of the dogs get to go anywhere, because it’s kind of a jerk move to just leave one of them at home. So I guess you can almost make a case for the ridiculous dog backpack (or as I am now calling it – The Doggy Bjorn) in this instance.

As he opened the bag and pulled out the backpack, he ran me through all the different features and options, and all the accessories that you can buy. Apparently for $20 you can get a little custom velcro patch with the dog’s name on it, for $15 you can get some reflective strips, for $13 the dog can have some goggles, or for $30 you can get the dog a special hooded jacket made to fit perfectly inside the backpack. What a world we’re living in, guys. What a time to be alive.

Watching the SO trying to stuff that fat little ball of fluff into the backpack was definitely one of the funniest things I’ve ever seen. I laughed so hard that I was crying and hyperventilating, as SO was desperately begging “CAN YOU HELP ME?”. No, brah, no I can’t, because I’m half dead on the floor from lack of oxygen while watching this one man comedy show right here.

Finally he wrangled him into it and hoisted Quinn’s floppy dead weight up onto his back. Cue more fits of laughter from me. I had to sit down again.

Once I had semi-control of myself, it was time to take it for a test drive. SO said that he was hoping to wait until dark, lest the neighbors see exactly what was transpiring. I was like oh hell no, we go now, right at the tail end of rush hour. These people need to know what kind of psychopath they’re living next to.

At first glance I think most people assumed that it was a baby, but there were definitely some very rapid double takes when they realized it was a fuzzy dog head sticking up out of that thing. Quinn, of course, seemed quite pleased with the situation. Finally, the humans understood how to treat him the way he deserves. He was totally content to take in the view from over SO’s shoulder as we walked. 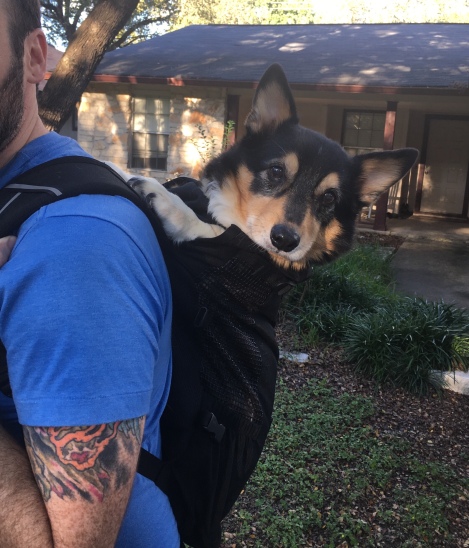 So yes, we now have yet another stupidly expensive (ok it wasn’t THAT bad, but I sure as hell don’t own a bag of any kind – purse or otherwise – that cost that much) pet accessory. Honestly, I feel like we should all just be glad he only bought one. If he buys me my own Doggy Bjorn for Christmas, we’re done.

26 thoughts on “The Doggy Bjorn”