For me, it’s always seemed like making plans either results in fortune or folly. Usually folly, when it comes to horses. Sometimes things work out (like AEC’s, or the Classic 3-Day) but a lot of times they don’t. Horses don’t know anything about the plans, dreams, or agendas of humans. It’s simultaneously one of the best and worst things about them, IMO. As long as they’re fed and safe, they’re happy. There’s a beautiful simplicity in that, even if sometimes it can make them really frustrating creatures to the humans who laid grander plans upon their backs.

Despite having been a multiple-horse owner for the majority of my adult life, Henry has been a one man show for years. My brain is still re-adjusting to having more than one animal to train, consider, take care of, and plan for. And since my budget is pretty tight, it takes a little more thought. I can’t just do All The Things, so stuff has to be prioritized, which requires looking more at the long term big picture. I’ve been doing a lot of thinking lately about what I really WANT to do, and when those things have to be done.

The big unmoveable future thing is really Presto’s 4yo (ie horse show debut) year in 2021. Whether he’s mature enough to start a legit eventing career that year or not, he’ll still be under saddle and he’ll still need to start going to horse shows in some capacity. That’s a really important, must-happen thing. Of course, showing two horses at the same time will be financially pretty damn difficult for me, so it’s likely that either both of them will go to schooling shows, or one of them (ie Henry) won’t get to show. 2021 will be the year of Turning the Baby into a Show Horse.

From there we start working backwards. In his 3yo year (2020) I’d like to send Presto to my cowboy/colt starting guy for 2 months in the spring – the same guy that started his dam. He exposes them to a lot, which I like, and he’s been doing this FOREVER, which I also like, and he’s gotten pretty involved in the english world so he understands what we want from our horses. Of course, he’s expensive, so all of my extra money that spring would go toward that. No recognized shows for Henny.

Once Presto comes back from the breaker he’ll really just trail ride or hack out a few times a week during the summer. Of course, it’s too friggin hot here for me to show Henry in the summer, so either Henry isn’t showing or we’d have to go out of state. Unless my financial situation changes or I got pretty lucky, I don’t really see that happening. In the fall of Presto’s 3yo year I’d like to send him for a month or two of dressage training, then bring him home and give him the winter off before his 4yo “first season” starts. Sending him off for more training is more $$$, so let’s go ahead and write off any recognized shows for Henry for the remainder of that year too. 2020 will be the year of Baby Training.

When you look at it that way, that really leaves us with the remainder of 2018 and 2019 for the primary focus to remain on Henry. Just boarding two already puts a pretty significant dent in my show fund for him, but when Presto is actually in training or needing to go to lots of shows himself, the Henry show budget will be almost non-existent. I don’t really know what will happen once they’re both rideable and showable. Selling Henry is not on the docket ever, but would I lease him to someone? Would I just keep him and not show him? Or would I find a way to show them both, albeit very sparingly? I don’t know that part yet. We’ll cross that bridge when we come to it.

But thinking about all these things did kind of make me feel like, if I have other things that I really want to accomplish with Henry, now is probably the time to lay it out. To be honest, I never had ideas for us beyond getting to Training level. And that was a huge, far-reaching idea that seemed more like a joke than an actual probability. So we got there, and it’s been great, and I’ve just kinda been like “Ok well here we are, achievement unlocked, ta-da!”.

Figuring out Presto’s grand plan and realizing just how little time I have left with Henry as my sole focus kind of prompted me to think… do I want to try to keep going? Do we ever want to make an attempt at Prelim, or do we just live at Training and have fun? Both are appealing to me in their own way. I didn’t start out ever wanting to do Prelim, to be honest. I feel like that’s the level where things start getting stupid, and more dangerous, and the difference between Training and Prelim is huge. My horse does not have endless scope, or easy speed. He’s Prelim-capable, but it really is nearing the the limit of his natural ability. Then again, we’ve schooled Prelim stuff and done a couple CT’s and both of us think it’s pretty damn fun. And I’d love for Presto to eventually be a 1* horse for me, so it’s obviously not like I’m saying I’ll never consider it. If Henry is sound and happy and fit, is there a real reason to NOT at least try to work towards it and see what happens? 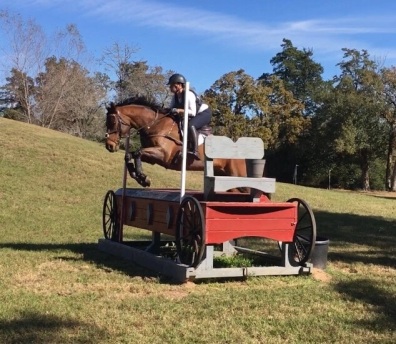 In my mind there are kind of two Prelims… “Legit Prelim” and “Prelim Lite”. There are a couple venues where I feel like the courses are a lot easier for my particular horse, and the P wouldn’t be that much of a stretch for him from where we are now – Prelim Lite. Other venues have monster courses, less suited to my horse, and I just really don’t have much interest in running them on him ever – Legit Prelim. Prelim Lite seems reasonably doable, with a lot of work. And those venues even have some schooling shows. That would take away the pressure added by spending more money and having the results be on the horse’s USEA record, which in turn makes it sound like a more interesting proposition to me.

So after texting with Trainer, the plan is to spend the rest of this year cleaning up our showjumping, stretching the comfort zone, and getting more miles. We’ll see where that leads us. If things stack up to where Prelim Lite looks doable at some point in 2019, we’ll give it a go. If not, we’ll keep having fun rocking around Training and that’ll be that. If I can’t step my game up, or if Henry seems stretched beyond his ability, then we’ll stay where we’re at. That horse owes me absolutely nothing, and the most important thing is for me to feel like we’re doing right by him. As long as he’s happy, I’m happy. So we’ll let the horse dictate our future, and see where it takes us. It’ll be a lot of fun, either way.

33 thoughts on “Thinking about the Future”