Like any self-respecting nerd, I’m am really really into metrics. I also have a huge interest in equestrian-related technology. So when Seaver had a Kickstarter for their smart girths and girth sleeves in summer 2016, I was all aboard that train. Equisense was pretty much already complete and on the market by that point, but it didn’t have heart rate monitor capabilities, whereas Seaver did. Being an eventer, heart rate data is pretty huge to me, so I opted to invest in the Seaver, knowing that it could be a year or so before it came. Yeah well… it’s been almost 2. They did recently confirm my shipping address though, so maybe I’ll get it before summer. Who knows. Honestly as long as all the functionality works correctly and it’s well-made, I’m cool with the wait. That’s my official stance anyway.

Lots of other bloggers have the Equisense, and I always stare a little too intently at their data. It’s really interesting to me. Eventers… we love times and speed and symmetry and all that stuff. And then last week Leah posted about a free app called Equilab, which boasts some of the same features. I downloaded it pretty much immediately. Because toys. 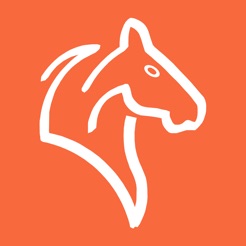 Basically the app uses the sensors on your phone to calculate and track your ride, so you have to either wear it on your arm or put it in a pocket. My phone is usually shoved in my pocket when I ride anyway (since I ride out, and I ride alone), so it’s just a matter of turning the app on and hitting “start riding” when I mount. The app has metrics for total ride time, time in each gait, turn direction, beats per minute, total distance, speed, elevation, energy consumption, and stride. It also paints a fun little GPS map for you that looks pretty damn artistic. Over time it gathers and accumulates the ride data to show “trends” or comparative metrics.

Naturally my first thought was that there’s no way it’s capturing all of that data accurately just from using the phone’s sensors and GPS. And from my observations so far (I’ve used it for 4 rides, of varying type), that’s true. I’ve kinda just tossed out the beats per minute and stride data. It’s definitely not accurate. I’ve also noticed that it has a really hard time picking up on quick transitions. For instance, my dressage ride yesterday included a whole bunch of quick-succession trot/walk/trot transitions and it picked up none of them. I think when it’s less than 15 to 20 seconds, it’s not capable of catching it. Or maybe it just thinks my transitions are shit. That’s possible too.

So the gait graphic in general also isn’t super useful to me for rides like that. For conditioning rides, however, where I’m not swapping back and forth between gaits a lot, it seems to do a respectable job of measuring the big chunks.

What it struggles with in those rides, though, is the “turn direction” data. I think because I ride in such a huge space, it’s just not registering the turns. When I ride in a smaller space it picks them up fine (although it also measures the turn data by way of cumulative time, which I don’t like and find kinda useless). I pretty much have to throw that data out, too. It’s interesting, but I definitely wouldn’t hang my hat on it. I always do the exact same thing both directions for conditioning rides anyway, so I don’t really need it.

What I DO really like Equilab for is total time, and time spent in each gait, especially for those conditioning rides. I mean… I do those rides with a specific plan in mind for how long my sets are, but it’s nice to have the metrics to back it up, and to be able to store them over time and look back on exactly what you’ve done. For logging purposes, especially tracking the length of rides for the purposes of fitness, the app is great (should also say, I’m in an area that has excellent GPS coverage – your experience may vary if you are not in such an area). I like that you can also input things at the end of the ride like how the ground was, how you and the horse performed, and what type of ride it was.

I did notice that the Android version looks different than my iPhone version. How different, I’m not really sure, but Leah had a few different things on her version than I do on mine. I kinda like hers better.

So is this thing a good replacement for something like an Equisense or Seaver? Definitely not. It’s capabilities are pretty limited. Then again, it’s totally free. It’s definitely at least worth the download to play with it or to use as a data logging system for your rides.

21 thoughts on “Fun with Metrics”