You guys know that I’m a, shall we call it, “young horse enthusiast”. Anything to do with breeding, development, and especially getting them started in their career is super interesting to me. Therefore I always read pretty much every article or show recap having to do with YEH and FEH, word for word. So when I was reading the recap of the YEH classes at Rebecca Farm this week, one particular quote from the judge really stood out to me:

If you talk to breeders, one of their biggest (or at least most consistent) complaints is how difficult it is to find good young-horse trainers in this country. In Europe it’s fairly common to have people that specialize in bringing up the babies, but here they are much fewer and farther between. And while a lot of big name pro riders are good with young horses as well, just as many of them are not.

Some of that I think is due to what Katie Prudent pointed out last week, about many of our best young riders only always sitting exclusively on the best horses. Many of our most talented younger riders that we’re producing these days just don’t spend a lot of time on greenies. I think that’s less common in eventing, but something that still probably contributes to the issue.

This was especially obvious to me last year at YEH Championships, since we got to sit there all day each day and watch pretty much everyone. Maybe they were just having a bad week, but there were a few that were borderline cringeworthy. Tip: don’t bring the baby horse to YEH Championships in an elevator, especially if you never plan on letting go of it’s mouth. They REALLY don’t like that.

It’s probably no surprise that the ones who stood out for particularly GOOD riding were ones that have been involved in YEH classes for a while. Because beyond just knowing the basics of how to properly bring a nice young horse along, the YEH classes themselves are different from a regular event. The judging is different, they’re looking for different things, and they should be presented with that in mind. It seemed like many riders didn’t quite understand how the classes were really judged, or what exactly the judges were looking for. I think that’s the other big issue. 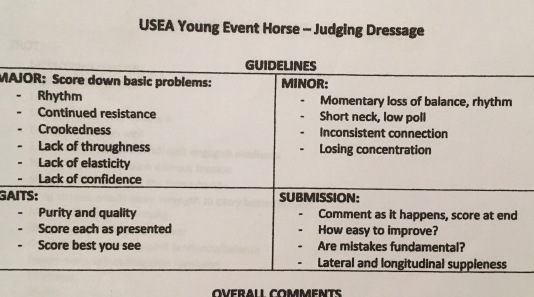 From watching a few YEH classes just in Area V, this kind of thing was even more obvious (because, duh, it’s not Championships). Many seem unprepared, or brought horses that really weren’t what the YEH program is meant for. See what’s written in the General Impression box on the scoresheet? “Potential as a successful 3*/4* event horse”. As a low level amateur, I personally would probably not not try do the YEH stuff myself… but if I had a horse that I thought was potential upper level material AND it was mature enough mentally and physically, I’d absolutely send one through the program with a pro.

Hopefully now with all of the YEH and FEH seminars and clinics that are starting to pop up (they’re doing another one at Championships on both coasts this year – highly recommend going if you can!), people who are interested will take advantage of them and go learn more about it. And hopefully some trainers will participate and help grow the ICP Young Horse Certification Program as well. I think if we can produce better young horse trainers, we can, in turn, produce better young horses. Which, if you think about it, could quite possibly be a big step toward making the US more competitive again on the world stage. Imagine if we could get really good at producing more of our own top quality horses instead of trying to buy them from somewhere else…

9 thoughts on “The Development of Young Horses”