At this show, stadium and XC were only 15 minutes apart. On one hand I love that, because that means for the jumping phases there’s just one tack up, one warmup, and badaboom badabing you’re done pretty quick. Definitely shortens the day and the amount of time you spend on the horse. On the other hand, it’s hard for derps like me to mentally prepare for two phases at the same time. Let’s face it, I can barely mentally prepare for one.

The stadium course was a challenging one for me and Henry. The beginning was pretty twisty and turny, which made it a little harder to get into a good forward rhythm. The courses here also tend to be wheeled pretty tight, so if you aren’t always looking to save some ground you’ll inevitably end up with time faults. Inside turns and shallow corners are your friend. He pretty epically saved my butt at the “in” of the two stride where I completely missed, yet he still kept listening to me the whole way through (I keep waiting for the day he realizes that I have terrible judgment and decides to completely ignore my input). He’s totally unfazed by my suckage.

We rattled the “in” of the one stride pretty hard (I figured he would since it was just plain brown poles. Boring.) but somehow it settled magically back in the cups. That was a gift from the karma bank, but we were double clear! We’ve been plagued by 4fault-itis at T, so I’ll take my clear round any way I can get it.

Michele was the hero of the day, helping me adjust things between phases and get my horse cooled down. Trainer is about to rocket that baby out pretty much any day now, so she’s a bit limited at the moment. Michele sponged him a bit while I threw on my vest, Trainer got my pinny adjusted, I put on Henry’s cross country boots, and then I was back on and headed over to the startbox. It was like a NASCAR pit crew.

They were running a bit behind, which I had no problem with… having a few extra minutes to walk around in the shade and get my head in the game is fine by me. I didn’t think any additional warmup was necessary so we just cooled our jets and waited our turn.

This is the first time we’ve left the start box at Training where I’ve actually felt like I could be competitive. I had my watch, I knew my path, I had a plan, and I wanted a double clear. I needed to prove to myself that I could really do this, and not just “survive” it. Granted, it was technically only our second full XC round together at T, but nothing on the course walk really bothered me (except the Trakehner… I knew that he’d jump it but I still refuse to get anywhere near it on foot… I made the mistake of walking up to it last year and that ditch still haunts my nightmares) and I had total confidence in my horse. The speed was quick at 470mpm, the course was long, and it was hot, but I know my horse is fit and capable.

Fence one was an easy little log, which we skipped right over. I landed galloping, wanting to establish a forward pace early and get a little ahead of my minute markers. 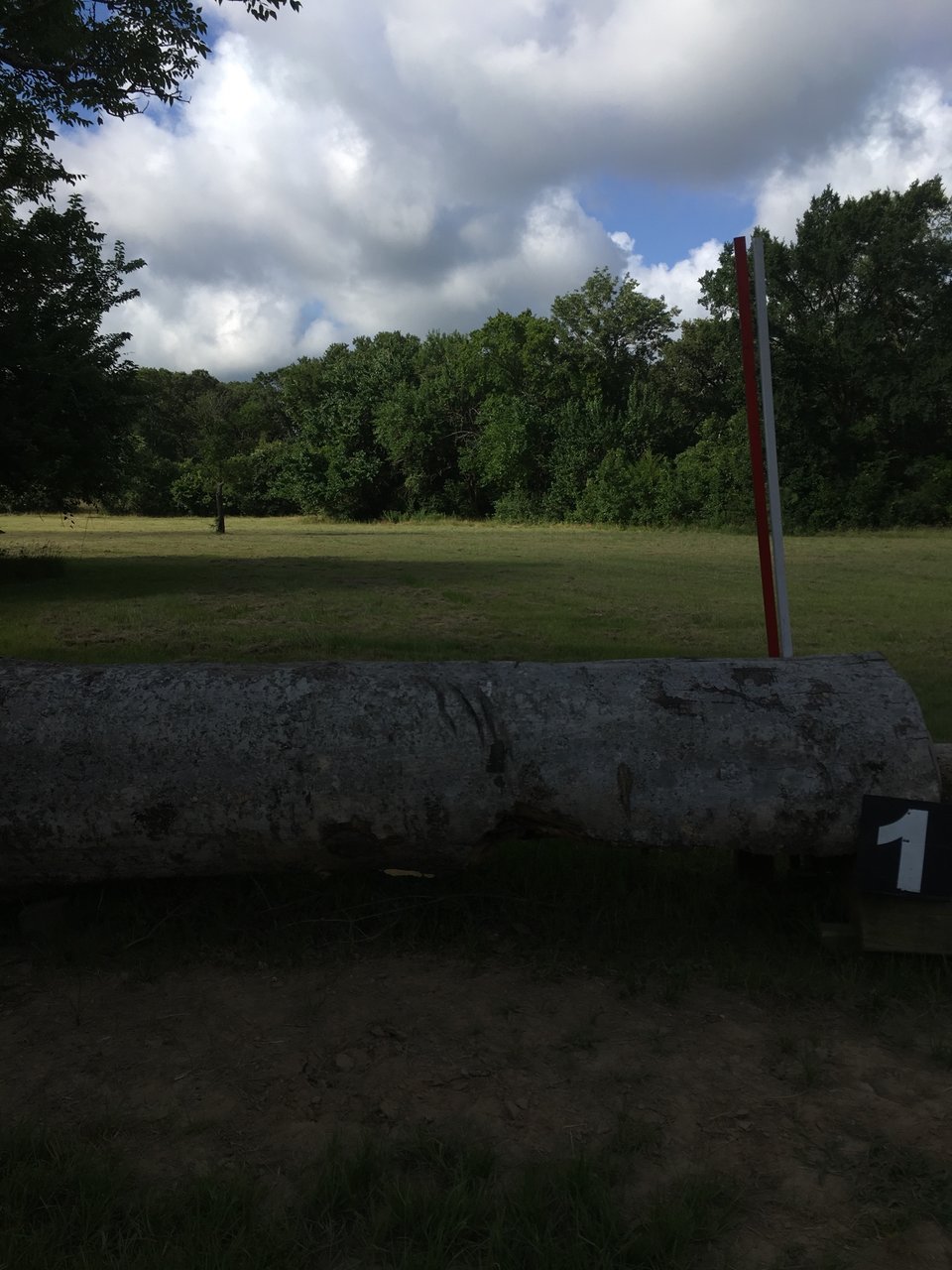 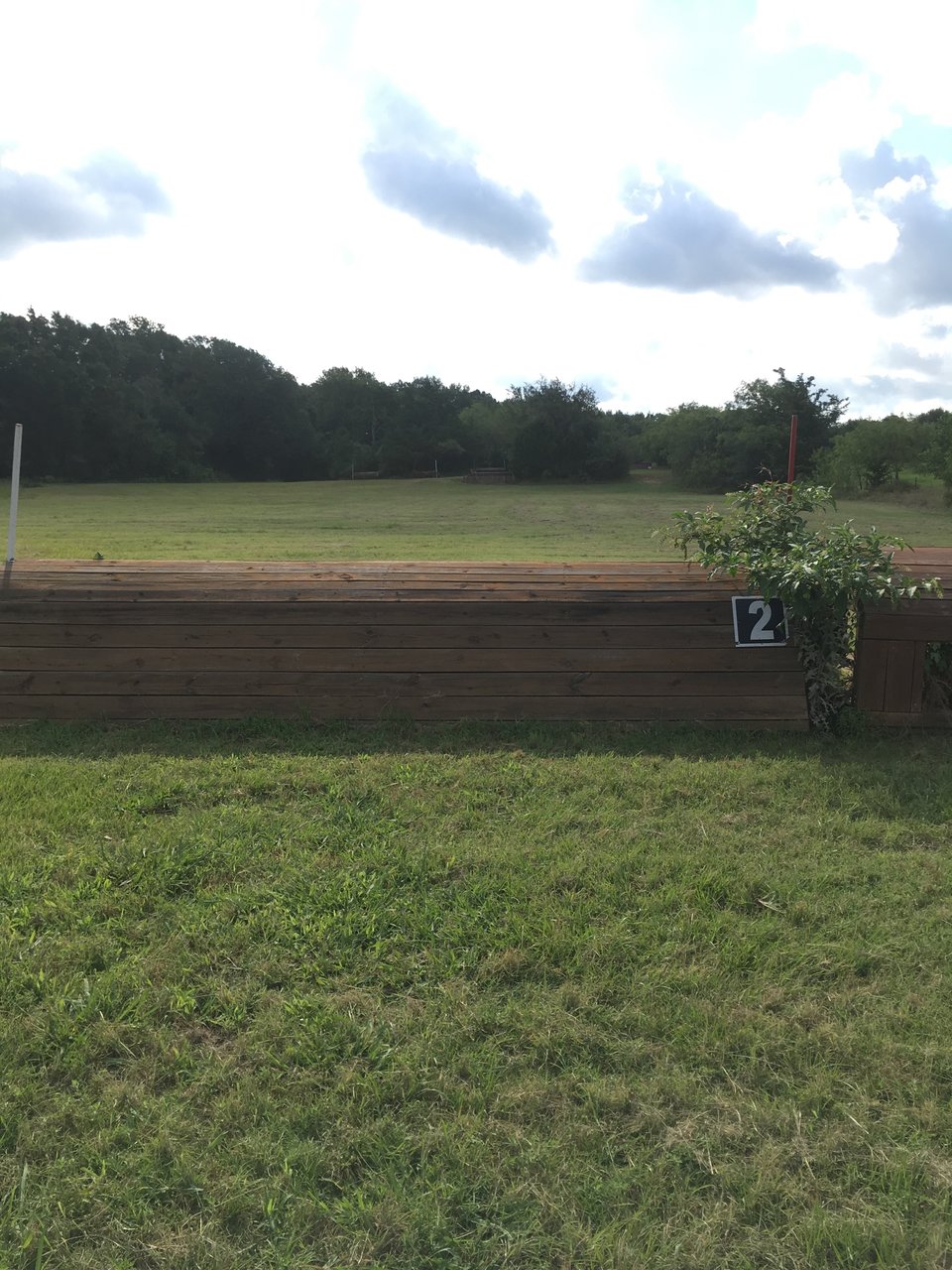 then over to 3, a little log heading into the trees 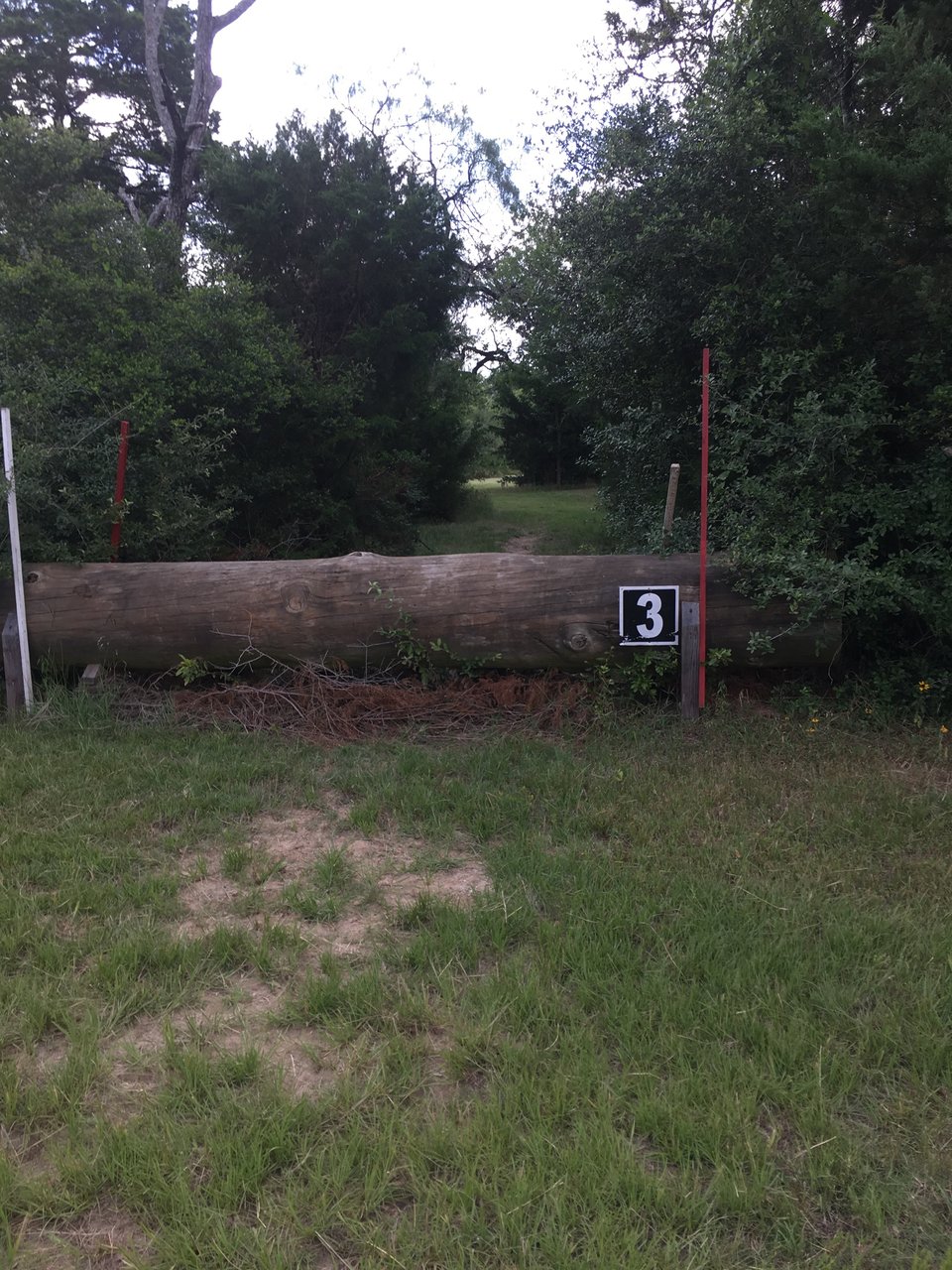 back around to the skinny rolltop at 4. Because of all the branches in our path I stuck way to the right on that one but it was no problem, and by this point we settled into our rhythm.

Then it was down to the little house at 5 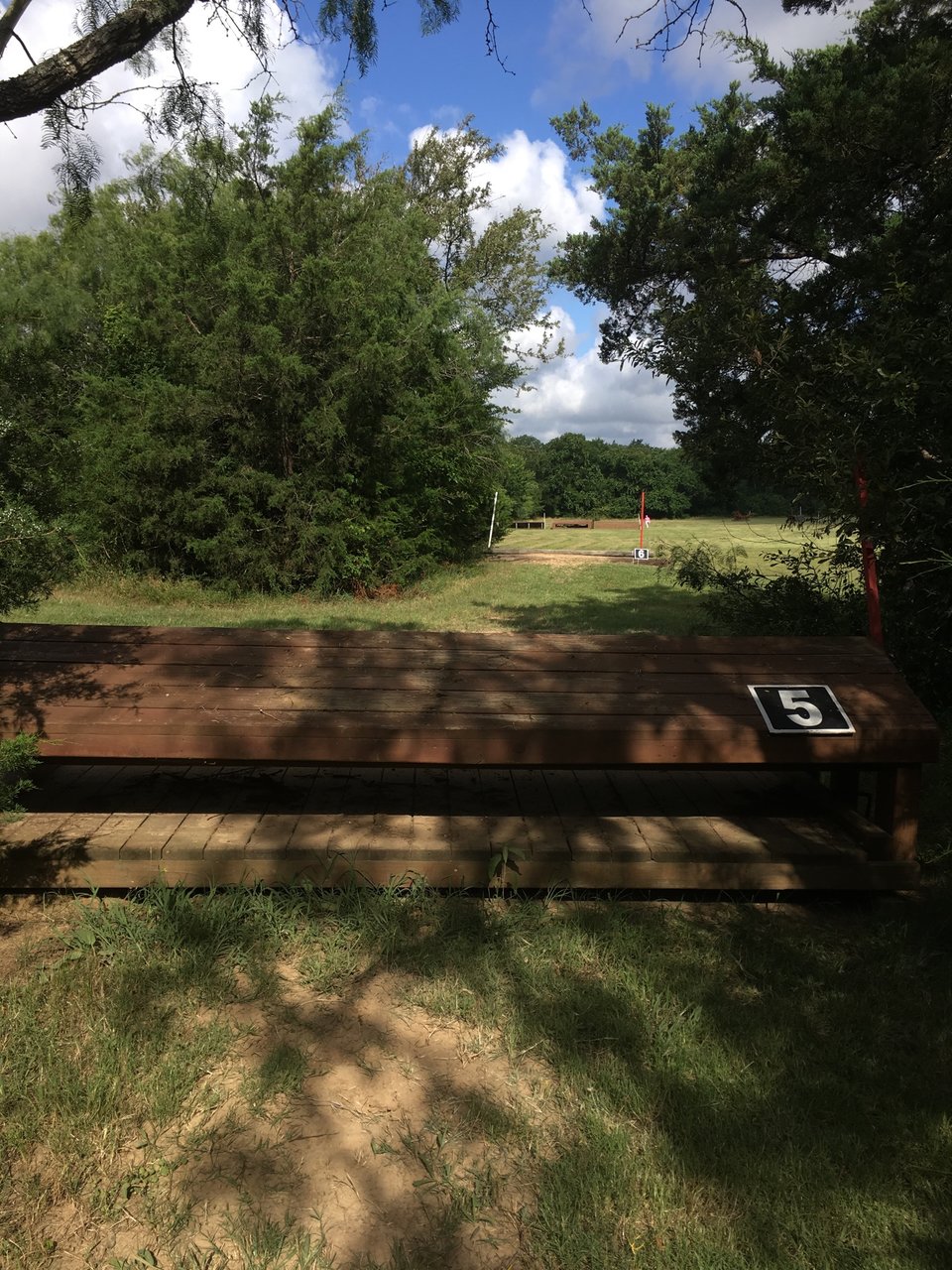 with 5 strides down to the big ass drop at 6. That thing legit used to make me piss myself. Dare I say that it’s actually fun now? 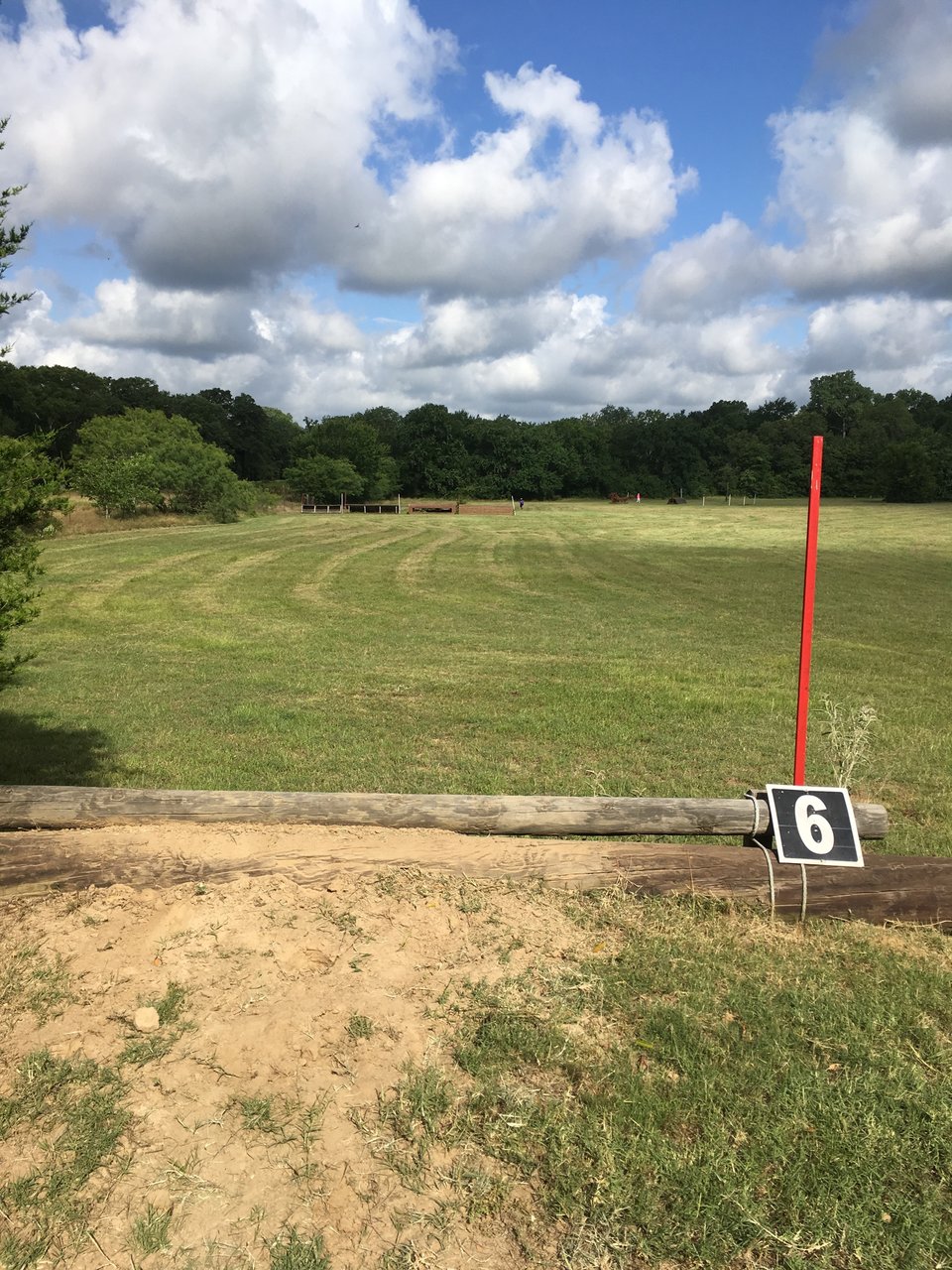 After that it was back across the field to the half coffin. I waited a little too late here to test my brakes and we almost went right past it, but once Henry realized where I was trying to go he spun right around and hopped through it (with his patented leap over the ditch, of course). Add more bling to that pony’s halo. 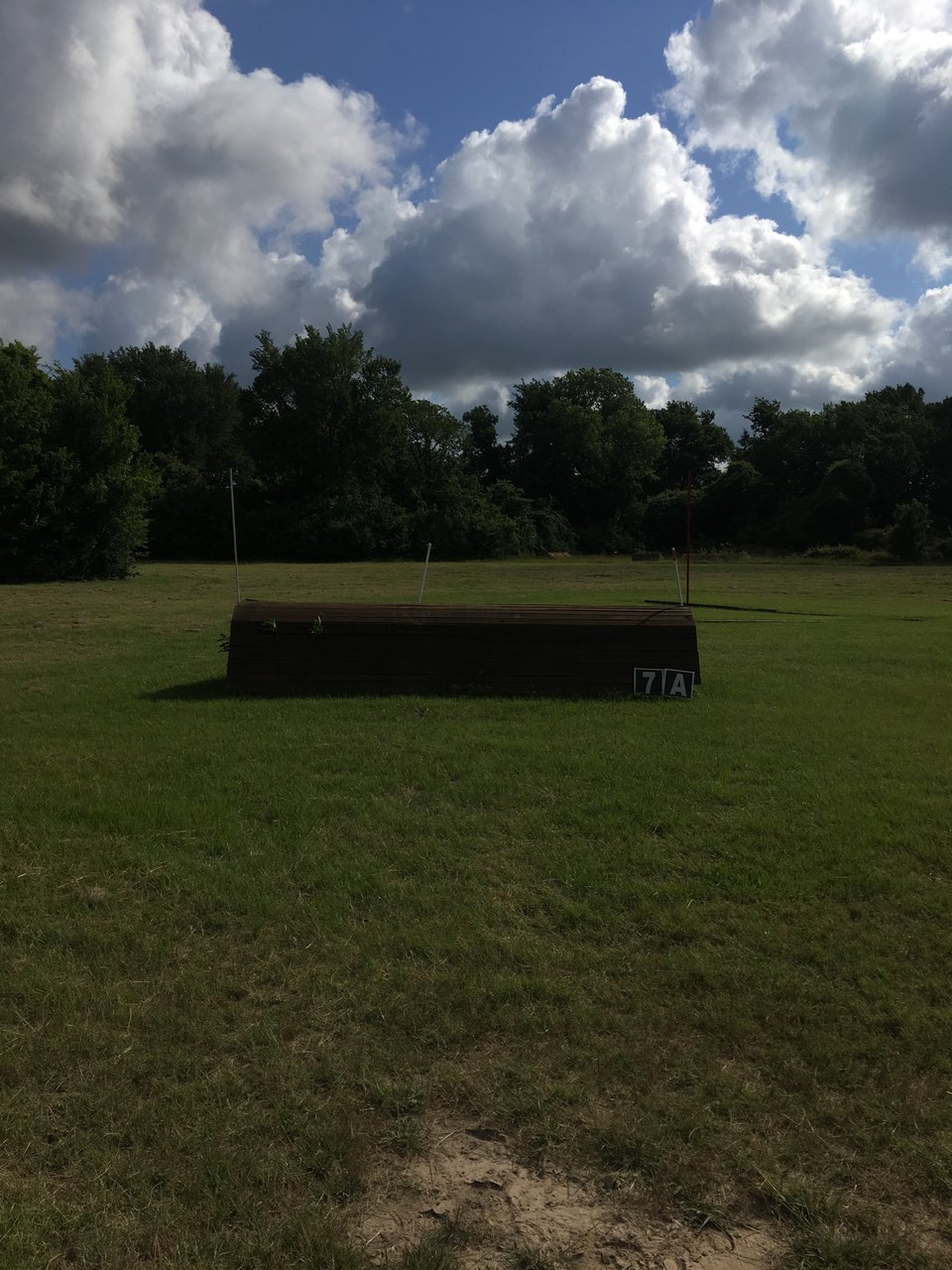 Then we motored across the bridge to the one option fence on course. Either you could take the straight quick route over the Prelim weldon’s wall, or you could make a loop back around and jump a T rolltop, which added a bit of time to an already speedy track. My big girl panties just aren’t strapped on tight enough yet for the weldon’s, so I took the rolltop loop. Honestly I should have just done the Weldon’s, the horse underneath me was not going to stop even if the damn thing was on fire. Next time. 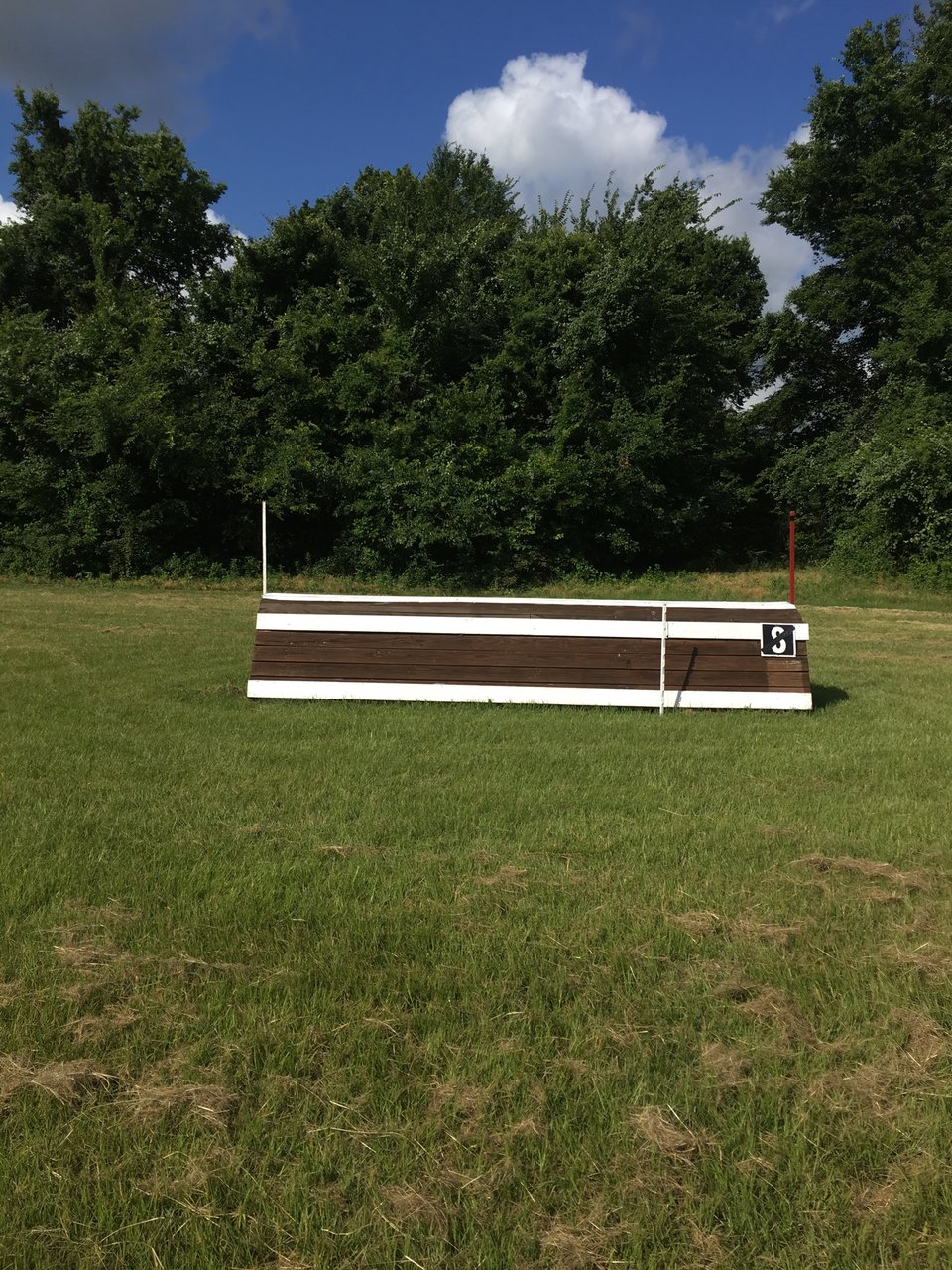 As we were turning back around to continue on our way he tripped behind and very nearly sent me flying right over his shoulder. Remember yesterday when I said it was really serendipitous that I forgot my saddle? I swear the only thing that kept me on was the big outer rear block on Trainer’s monoflap. I felt my leg catch on that thing and I was able to haul myself back upright. Meanwhile, Henry never stopped cantering, just kind of flicked an ear back at me like “Oh Jesus, you’re not gonna fall off are you?”. I had to swing my right leg forward and out so I could untangle myself, assured the jump judge that I was good, and then kept going. Time was tight y’all, no time to dawdle!

Bless Henny’s precious little heart (again) he just kept right on trucking and hopped over 9, a little brushy thing in the shade, like nothing had ever happened. I’m 99% certain he could do this without me if he could get his hooves on a course map.

Then it was out into the big field for the down bank to corner combo at 10AB. That corner also used to make me want to piss myself, but thanks to SuperHenny it was NBD. 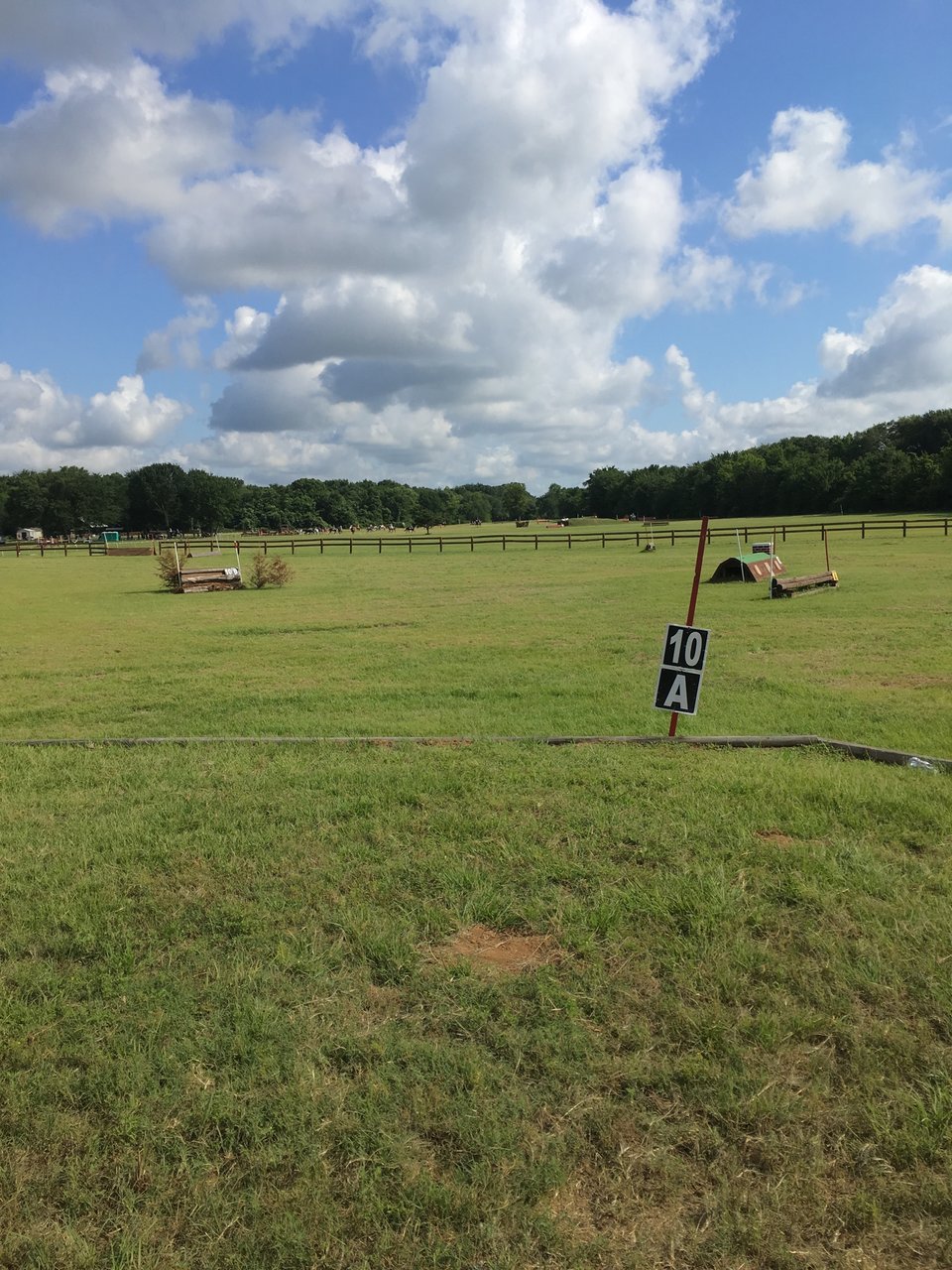 After that it was around to the water, which I definitely rode a bit backwards to. It was a hard left turn to it and I was a little wary after the incident at 8, so I got too handsy instead of allowing him to come forward out of the turn. But Henny being Henny he had no problem compensating for my mistake and hopped down over the log into the water, then straight out over the other one, despite my handsiness forcing him to add another teeny stride. Thank goodness for horses that are quick with their feet and tidy with their knees. 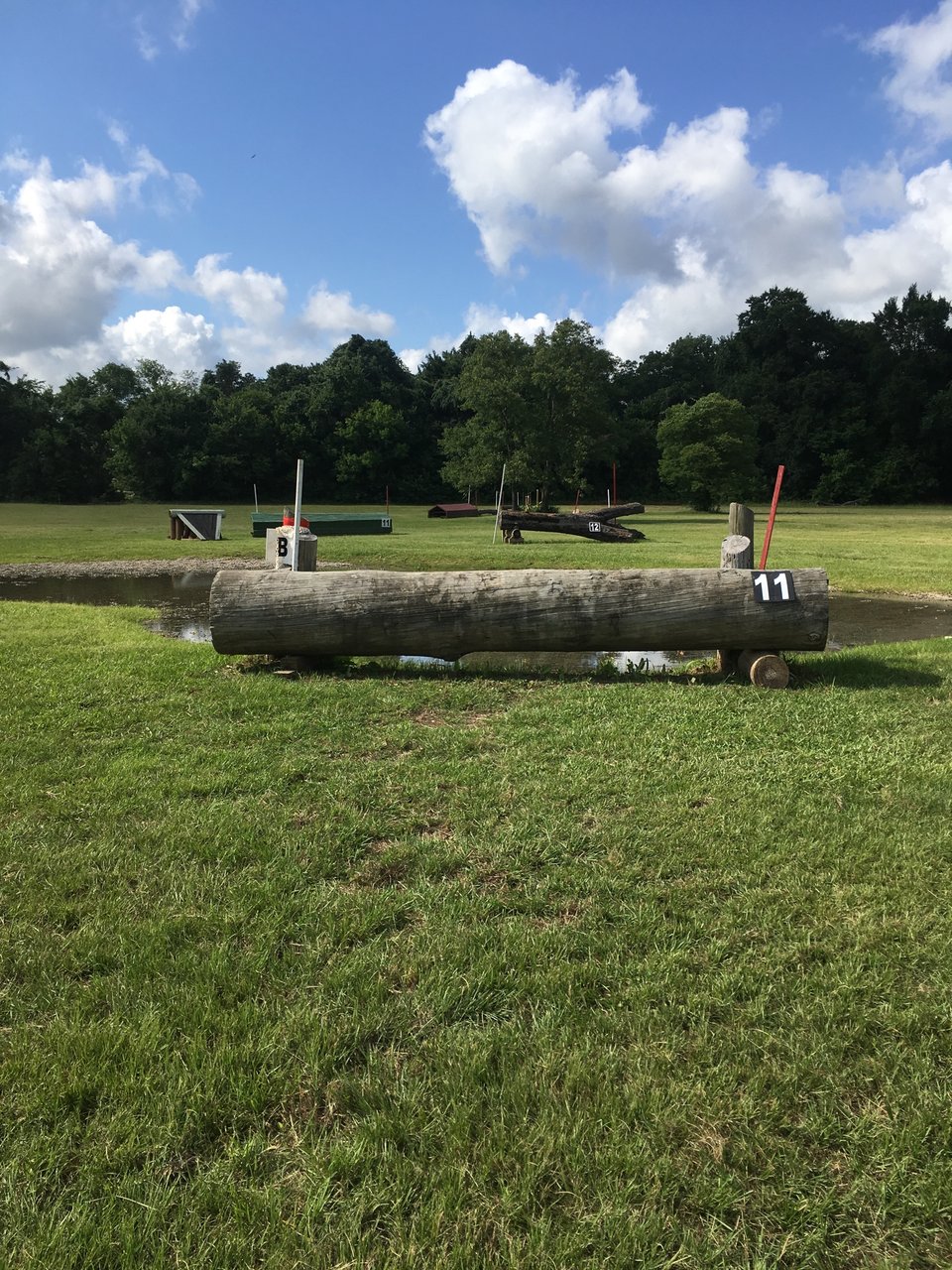 There was a little bit of a gallop before 13, a brush table, so I let him open up and cruise a bit and just jump that one out of stride. When we landed we opened up even more for our long gallop across to the other field. Here is where I knew I would find out how much horse I really had, but as soon as I asked him to go, he WENT, so I knew we still had plenty in the tank. Pretty sure I was breathing harder than he was. 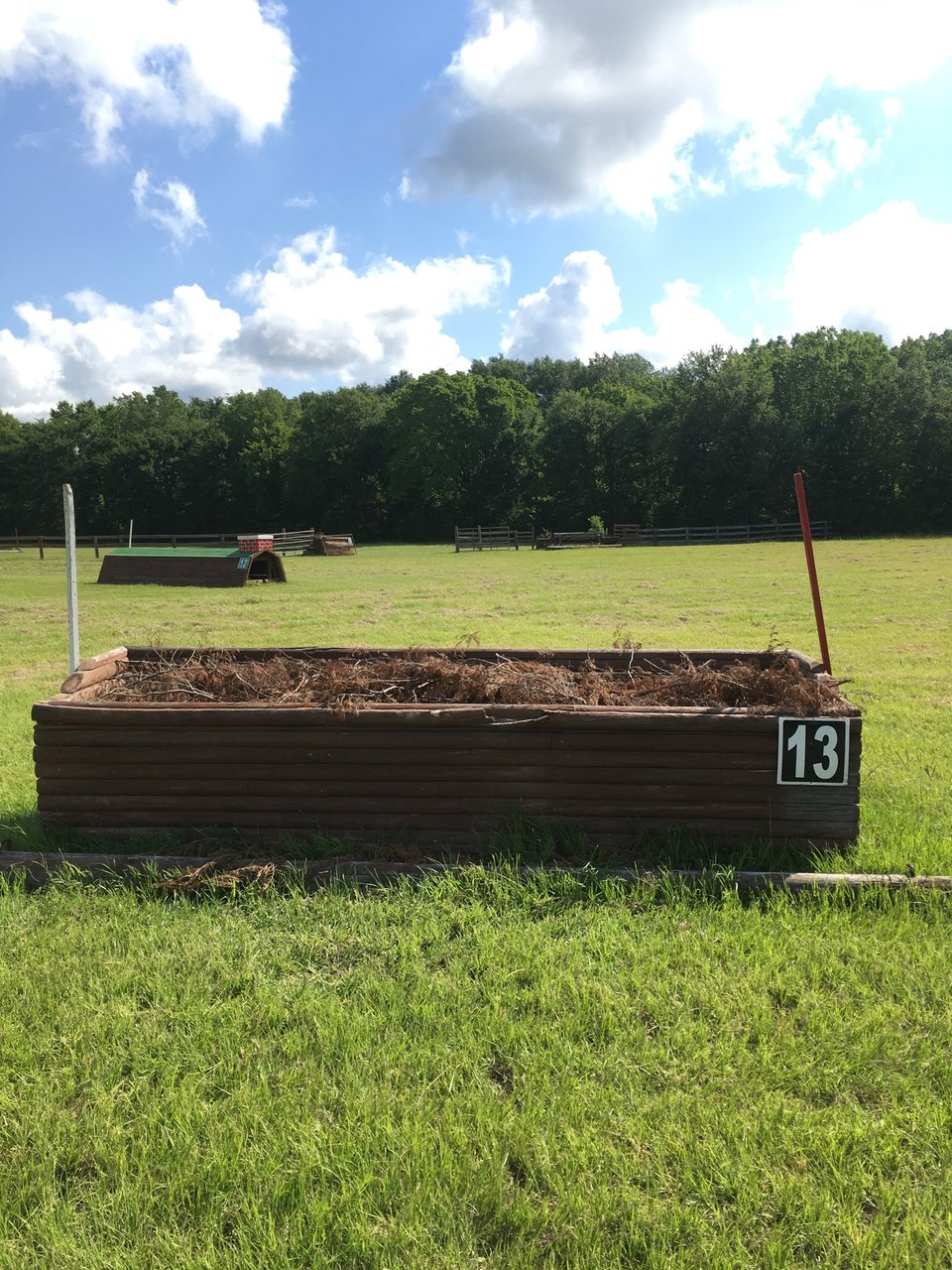 After the long gallop I had to balance him back a lot for 14 and 15, the angled brushes. There was only one good line through there and the approach was a bit weird, but as soon as I found my line and got him straight he pinged right on through almost a little too eagerly. 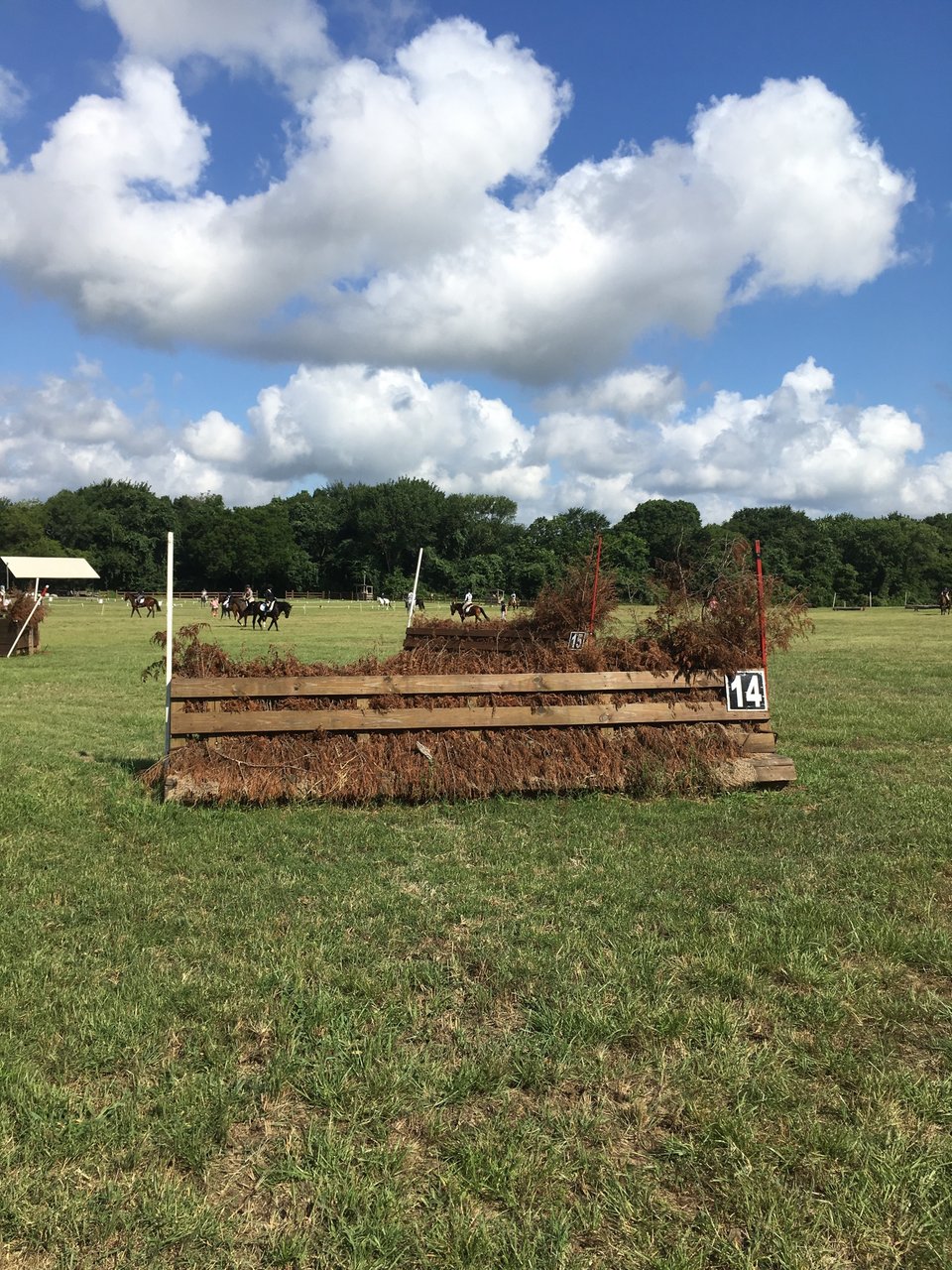 Then we had another long gallop down to the Trakehner of Death with the huge deep ugly drainage ditch under it. I gave him a couple little taps on the shoulder as we got close, probably more for my benefit than his, and while he definitely gave it some air time, he never even thought about backing off. I think the best part of that fence was my comment that you can hear on the helmet camera video a few strides afterwards (I’ll post the full video towards the bottom so you can see the almost-wipeout and hear all the commentary). 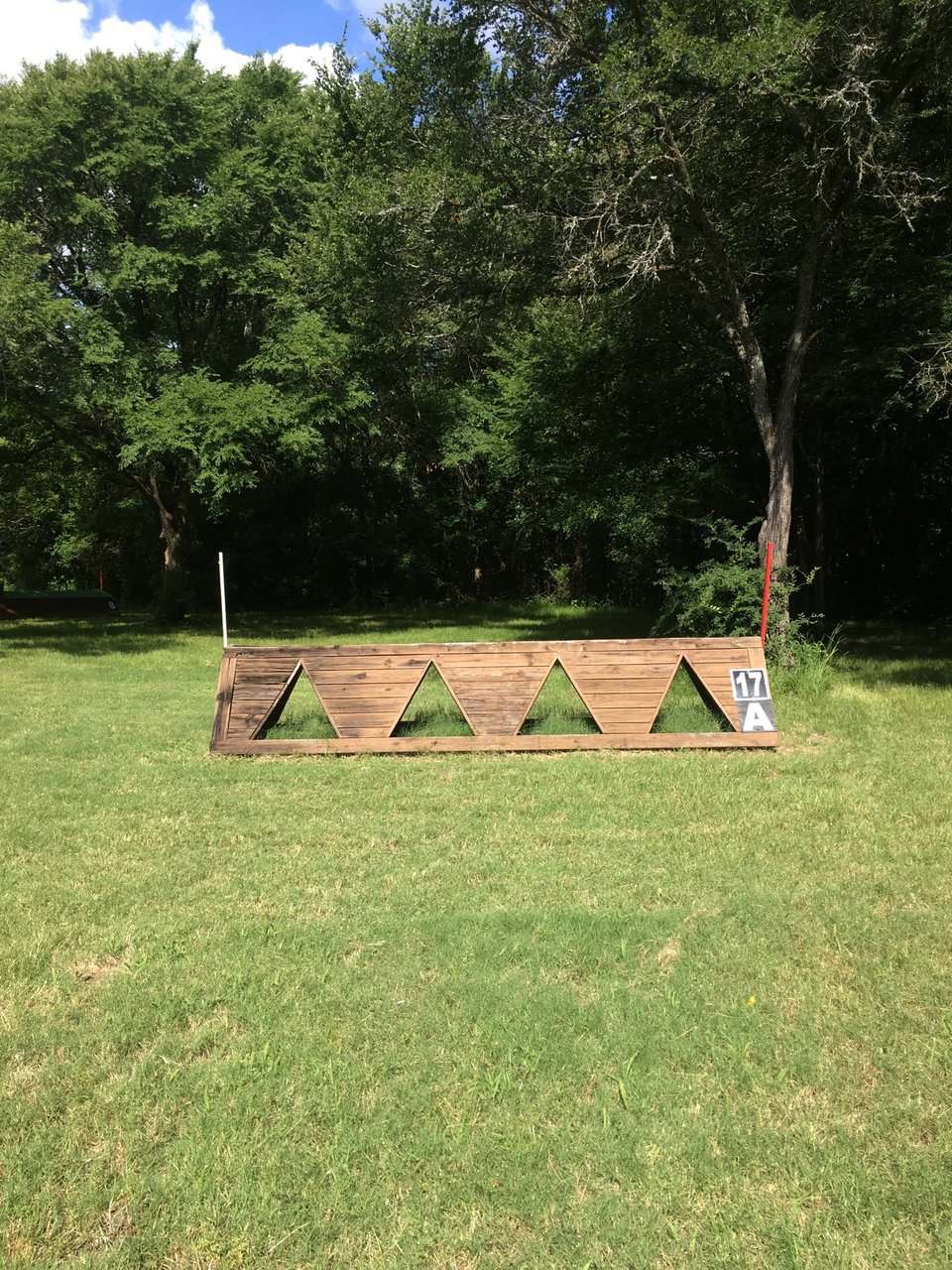 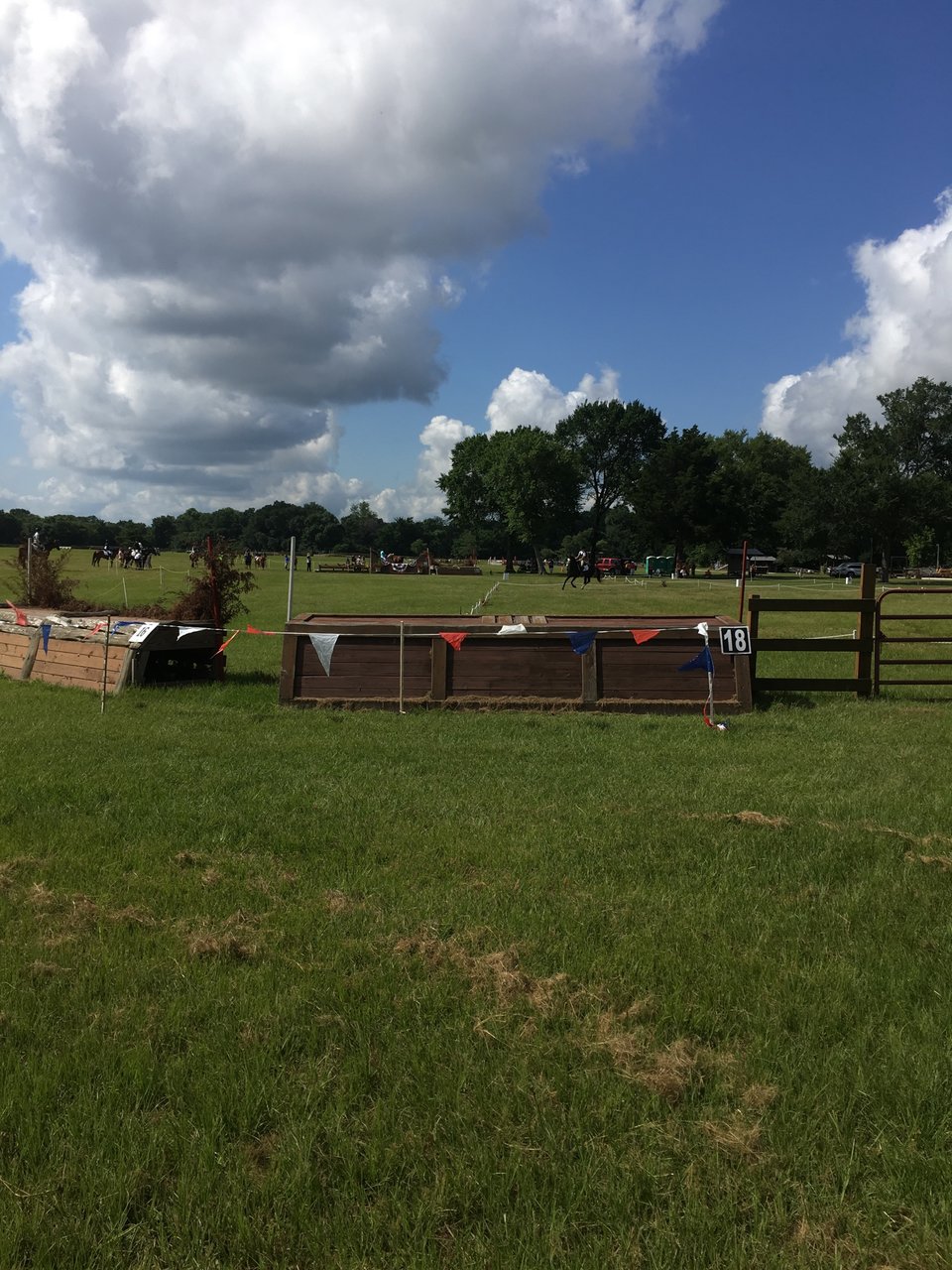 to another little brush table that we shared with Novice as our last fence. Pretty sure it was the tiniest one on the course! Funny story, at our first ever event at BN I looked at that very same fence while we were course walking and said I would never ever jump it because it was huge. Heh. This fence is memories.

Henry came home strong, still full of run, and under OT for another double clear!

We were the only ones in the division to finish on our dressage score, and the double clear stadium and XC moved us up to 2nd. Pretty darn thrilled with my pony, he’s really starting to feel like a pro at his job. It’s nice to know that he’s confident enough to where I can make some mistakes at this level and he’s completely undeterred by it.

After XC, Michele helped me get him cooled down and get him wrangled into his ice boots (which definitely is a 2 person job) while he ate half a jar of cookies, and then I packed his feet. Our standing deal is that if he’s double clear XC he gets every cookie I have in my possession at the time, and I’m always true to my word. I’m officially cleaned out.

Overall it was a really fun show and a huge boost to our confidence. Of course I’d like to eliminate the mistakes, but now I know for sure that we can do it, and I have things to improve upon for next time. So damn proud of my pony though, he continues to step up to the plate and do his job without fail. It was not that long ago that Training was a distant fantasy for me and he’s made it possible in short order.

And I really can’t thank Michele enough for all her help, she was indispensable all day long… even helped me pack all my crap! That’s a true friend right there. Can’t wait to get back out there and do it all again (Michele can you move back to Texas please?).