I’m starting to think that I’ve been doing the horse thing all wrong before now. I’m convinced that there’s no better combination than having a relatively “made”, mature (well… not always mentally) horse and a total neon-green bean at the same time. The experienced horse so that you can keep yourself tuned up as a rider, and the green horse because they’re just the most fun and rewarding thing in the world. This is definitely the way to do it.

On Wednesdays I ride Presto. Originally when I switched over to twice a week with him (which was only a few weeks ago) I was hacking him during the week and then doing his “real ride” on the weekend. But since I ride Henry on both weekend days, and he always gets the earlier time slot because ya know he can’t really breathe very well in the summer, that was pushing Presto’s ride later and I’d inevitably end up feeling like I was gonna die of heat stroke after 10 minutes of trotting. It quickly became evident that it made more sense to do Presto’s real ride on Wednesday when he’s the only horse I’m riding, and earlier in the morning, and do his walk hack on the weekend instead. 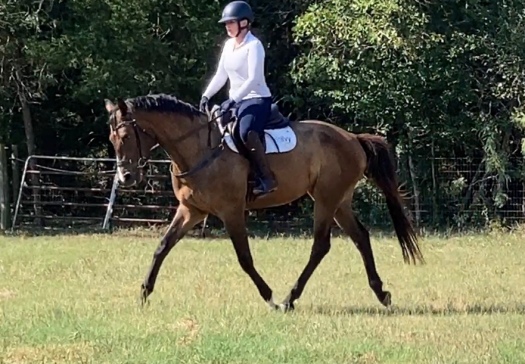 The week before last he did his first course of poles, so this past week I decided to up the ante and try riding him out in the grass jump field again. I tried to ride him out there once a while back (maybe ride 12 or so?) but it very quickly became evident that Presto just wasn’t quite there yet. That field is a little bit difficult with a super green horse, because 1) it’s on a bit of a slope, which is tricky when it comes to balance. 2) there are trees and jumps to maneuver around, you have to be able to make some S-shapes and leg yield at times to make a path in there if you’re moving faster than a walk. 3) there are some low hanging branches that make accurate steering VERY important. There’s a particular spot along one fence line where there is no margin of error when it comes to steering – if you’re off, you’re whacking into a branch (I’ve caught my shoulder on that thing before, it doesn’t feel nice).

Last time he just couldn’t do any of that yet really. I wasn’t totally sure that he’d be able to do it now, honestly, but I figured it was worth a shot. And spoiler alert: he did great.

Yeah, the balance comes and goes a little bit, but I had no problems maneuvering him around everything. I think riding him out there is really good for him, since he’s having to learn how to deal with the terrain and we’re constantly steering or leg yielding or half-halting or something. It gives him plenty to think about and engages his body without being unreasonably difficult. Even just in the 15 minutes I rode him, he was already starting to figure out how to rebalance himself on the downhill slopes. At the end I trotted him over a pole on the ground a few times, making the approach a little more challenging each time. He seems to get the idea of going to the pole.

I think I’ll be riding him out in the jump field more regularly now that I know he can handle it. The whole goal of riding him at all right now is to slowly build up his strength and balance, so that space fits the bill perfectly for helping develop those things. 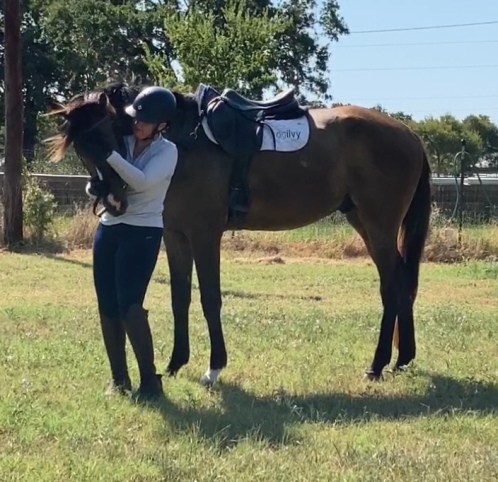 On Fridays I usually do a dressage ride with Henry, but I was so brain-fried from work meetings that I just Could Not last Friday, so we cheated and went for a canter in the field instead. Whatever, it’s 2020, I can skip dressage day if I want to. Saturday I woke up with a jacked up back (from… sleeping? I’m officially at that age, I guess) so I just did some canter pole work with Henry and lunged Presto over some trot poles in the arena.

Sunday my back felt better enough for JOMPIES, Henry’s favorite day of the week.

We did a little warmup course with some square turns (someone has been a little bit arrogant lately and thinks that rebalancing and using his inside hind through the turns is totally optional. It is not.) and then did a course. Henry is still feeling super cocky right now, but he was more polite and adjustable even on the tight, slick downhill turn back to the barrels, so no complaints. Once the weather stops being ridiculously hot I’d like to get back to some jump lessons, but for now I’m glad to have the Pivo footage. I can make the next weekend’s jump plan by watching the previous week’s footage. It’s the gift that keeps on giving. Plus I actually have plenty of media for the first time in my damn life.

After Henry’s jump school Presto went on his walk hack around the farm, accompanied by 5yo dressage horse Ella. Ella is not convinced that hacking is safe, especially when she’s alone. Presto led the way like a good boy (mostly) but he seemed dismayed when she just walked unceremoniously over the little runoff ditch that he always gleefully jumps. He’s pretty sure she was doing it wrong.

This week I have a bunch of work meetings that might mess with my newfound routine, but we’ll see how things unfold. Hope everyone had a good horsey weekend!