As you may recall, I went on a quest a few months ago to find a saddle pad solution that would work for Captain Sensitive. Er, Henry. I’ve had problems on and off over the years with different pads rubbing him in different places, but this summer in particular everything I had seemed to irritate him somehow. I decided, somewhat desperately and very hesitantly, to try the sheep route. Natural fibers and plenty of protection for sensitive skin – maybe that would be the key?

This was not my first foray into the world of fluff. Way back in my hunter days (a separate lifetime, really) I had some Fleeceworks stuff. I thought it was kind of a PITA to take care of, but that could be because I’m kind of a garbage human in general and non-living things that require a lot of special or particular care will probably not fare well with me. Granted, I’ve gotten a little better about that with age. BUT, if Henry would be happier in a fluff-covered world, I was willing to give it a go again.

The real problem was trying to decide how to choose what to get. Back in the day there weren’t really a TON of options or brands. These days – you dream it, you can find it, or you can have it custom made. The first order of business: did I want sheepskin or did I want wool? 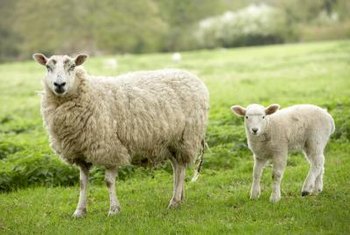 With sheepskin, the wool is still attached to the skin of the sheep, and that’s sewn onto the pad. With wool, it’s been sheared from the sheep and woven onto a fabric backing. Not really sure which I would prefer, I scoured the internet to see what other people had to say about the two. The general consensus was that sheepskin tends to be more dense, which makes some people think it offers better shock absorption, but that it was harder to clean. Since the skin of the sheep is still attached, you kind of have to think of it as a leather item, which requires special care when washing. With wool, since it’s attached to a fabric backing, it’s easier to wash and care for. Some people also prefer the fact that a sheep didn’t have to die to make the wool. And it’s cheaper. Both sheepskin and wool are touted for their excellent wicking abilities, superior airflow, and comfort. So basically – did I want it still attached to the skin, or not?

There are other factors to consider, too, of course. Do you want the spine of the pad to have wool or not? Some claim that having wool over the spine can make the pad bind on the horse’s back, where others claim that NOT having wool on the spine leaves seams that could rub or create pressure points. This is the point in your research where your head starts to spin and you wonder if the wisdom of the internet is a blessing or a curse. As with all things horse, there are many ways to do the same thing and everyone thinks their way is best.

I also had to decide if I wanted to have the ability to add shims to the pad, to adjust the fit of the saddle if needed. Henry is older and maintains a steady shape, and his saddles fit him well (important to note: they were fitted to him specifically to allow for a half pad underneath). But Presto is a bit narrower and may require some shimming to make my saddles work for him.

And THEN, after you figure all that stuff out, you get to decide whether you want said fluff on a half pad or on a full pad. And if you want rolls or no rolls on top. And how far down you want the fluff to go. And how much you want to pay for it. And what colors you want. And who you want to buy it from. So many options.

In the end I just couldn’t really make up my mind, because it’s tough to know what your horse will prefer until you try different things. Plus I have two horses to consider, and knowing my luck they’ll probably like different things. I also have two saddles, a jump saddle and a dressage saddle. So I bought a couple of Premier Equine merino wool full pads (wool, covered spine, no shim options) – one dressage and one jump – and a Mattes half pad (sheepskin, clear spine, with shim pockets). I got that one in an XL jump shape so that I could still use my dressage saddle with it and everything would sit ok underneath. All bases covered. Or… no actual hard decisions made, since I got a little bit of everything.

Well ok I did make ONE decision – navy. Everything navy. Color is the easiest part.

I’ve been using all of them, trying to get a feel for how they compare and what I think of the different designs and wool vs skeepskin. I remain convinced that it’s an entirely personal choice. The Premier Equine pads, with their merino wool, are definitely a lot easier to take care of than I thought they would be. My memories of taking care of my sheepskin pad back in the day were not very fond, but these have been pretty easy. They don’t get gross very fast, because the horse’s back stays so much cooler under them. I’ve only washed them once so far, and that was this week.

If we put them in a head to head comparison, I think they both have their pros and cons. For ease of care and wash, the nod would go to the merino wool. I tossed them in the wash with nothing special and they came out looking new again. Granted, neither the sheepskin or the merino wool gets gross very fast, because the horse’s back stays so much cooler and drier under them. I would also give a very slight nod to the merino when it comes to breathability, I have noticed that Henry’s back is ever so slightly drier under the merino than the sheepskin. As to the shock absorption factor, I definitely feel that both of them do absorb some impact, but I don’t notice a difference between the two.

If you’re looking for luxury, sheepskin wins. The material just FEELS expensive, and really soft. They’re both soft, but sitting right next to each other the skeepskin is clearly more luxurious. The merino wool is more coarse to my own hand, although I haven’t noticed any difference in how Captain Sensitive feels about one vs the other. I also haven’t noticed a difference in how he feels about the wool covered spine or the clear spine – he seems to have no preference. I like the idea of the wool covered spine more, just because any “disruptions” to the surface of things that are touching him have generally been a problem, but in this case I can’t say that I’ve seen anything to actually back up my theory. Without a doubt though, Henry has had ZERO rubs or skin irritation since I swapped to the fluffy pads, both seem to have done the trick.

Both pads also have good wither clearance, which is very important. If you have an exceptionally high withered horse I might be inclined to go with the clear spine, so the pad sits a bit further up off the wither. For longevity, I can see the sheepskin lasting a bit longer too (uh… assuming I don’t accidentally destroy it in the wash…). The merino wool, being attached to a fabric backing, does shed a little bit whenever it’s brushed or washed.

The care hasn’t been as hard as I had imagined. Like I said, they don’t get gross very quickly. I just hang them upside down in the tack room so they can dry between rides, and once a week or so I brush out the fluff with a slicker brush. The sheepskin/wool is actually a lot easier to keep clean than the cotton parts!

There was, of course, a massive price difference between the two. I paid $108 for BOTH of the Premier Equine pads (on sale, with a coupon code), making them $54 each. The sheepskin Mattes half pad was $140 on it’s own, and that was from Australian company Hufglocken, who definitely has the best prices on Mattes (and always has coupon codes too). The same pad from an American shop would have been closer to $300. The construction of the Mattes is clearly superior, as you would expect from the price difference, and they can make just about anything you can possibly dream up. The options on the Premier Equine pads are many fewer (and sadly I don’t like most of their color combinations), and none are shimmable, and they don’t have any customization. The Mattes took longer to get, of course, being a custom order and then having to go from Europe to Australia to the US. It was a couple months all total. The Premier Equine pads made it from the UK to my door in just a few days. Of course, these aren’t the only two brands on the market either… there are LOTS, with all kinds of different options.

To me there’s not a really super clear winner between the two. I think it depends on you and your horse, and what you want from the pad. I actually really love having both, because between the two designs I feel like pretty much all of my possible needs are covered. Each has it’s perks, and their own pros and cons. Overall though, I’m pleasantly surprised by how much I’m liking my fluffy pads in general. I was scared to take the leap, because of the care, but they’ve been much easier than I thought and Henry really seems to like them. I will be buying more, since I want show pads too.

I’ll do a separate review of just the Mattes pad by itself soon, with more details about it and all of the possible options. Until then, hopefully this helps anyone who’s thinking about going the fluffy route themselves. I don’t regret it!

12 thoughts on “The Fluffy Experiment”