We are 3 weeks post-Coconino and already I’m going a little stir crazy. Normally this is the time of year where we take some time off, relax, and decompress. I usually quite enjoy it, and so does Henry. But we kinda did that in May when I hurt myself, and now it seems like neither Henry nor I am really feeling the need to do it again. I’d like to just say screw it and spend the rest of the summer hitting jumper shows and XC schooling, but two problems that: the VS outbreak and the weather.

My horses are in Bastrop county, which – NATURALLY – has the biggest outbreak. So far we’re up to 51 quarantined facilities in the county, and it’s rapidly rising. The VS itself, while gross and painful for the horses, isn’t usually a huge deal, but the mandatory quarantine can go on for weeks or months, so there are multiple reasons to try to avoid it. VS is a virus that can be spread either via direct contact or via blood-feeding insects, thus while I can’t do a whole lot about the latter aside from smothering my horses in clouds of fly spray (I went through a bottle of fly spray in a week), I can definitely do something about the former. I don’t know that it’s actually possible for us to avoid getting VS at our farm considering that we’re totally surrounded by it, but we’ve voluntarily quarantined ourselves for now to at least try to lower the risk a little bit.

So, no jumper shows, no XC schooling, no lessons.

Of course, it’s also way too effing hot for most of that anyway. We’re supposed to be in triple digits all week, and the humidity has been gross too. Some changes at work combined with the new barn location have made it basically impossible for me to ride before work, and it’s really too hot to do much in the afternoon. Henry has been getting a couple days off during the week, and when I do ride it’s usually either a long walk to pony Presto or a short bareback dressage ride. That’s about the extent of what I can do during the week without feeling like I’m killing him. The “real” rides happen on the weekend.

We’ve also not gotten any rain in weeks and the ground is like concrete, so it’s just an all around good time right now.

I did pull a few jumps out this weekend to take advantage of the freshly-cut hay field. I set up a jump on a short steep hill, a jump on the edge of the arena, and a coop near the fenceline. Henry was Pumped AF to be jumping and ran around like a crazy dolphin. I think he’s as bored as I am right now.

I will say, the weekends do seem a lot longer when you don’t have a lot of horse stuff taking up your time. We finally went to see The Lion King, which was awesome except they ruined my favorite song. And the lady next to me in the theater started bawling before we were even 2 minutes in. Still, it was good.

And on Friday our regular horse-friends happy hour finally got to hit up the fancy milkshake place that opened a while back. Although they were out of the ice cream that serves as the base for the one I really wanted, so that was a bit disappointing. Still though. Behold. 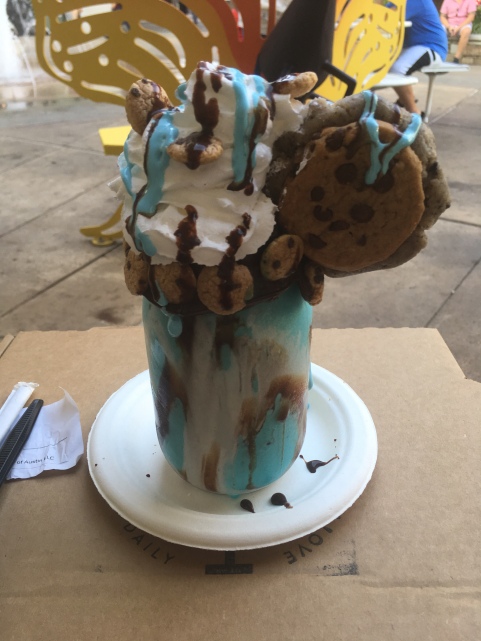 Yes, OF COURSE I felt like absolute shit after that, for about 12 hours. Still worth it though.

Otherwise I spent a lot of time this weekend obsessively checking scores for shows that I was nowhere near. Not having any PanAms coverage was a real bummer, especially when I was just hitting refresh over and over again during XC. It was kind of a bloodbath with all the eliminations and refusals, so not being able to see what was going on was stressful. But yay Team USA for getting it done. The other show I was stalking was Millbrook HT, where there were FIVE Mighty Magic offspring (that I know of) competing. One at Advanced, two at Intermediate, and two at Training.

One of the Training ones withdrew after dressage, but the other 4 all jumped clear XC (the three upper level ones were all double clear XC, just some time for the young one at T) and had only one rail between them in stadium. Is it weird to stalk horses like this? Probably. Am I gonna do it anyway? Duh. I don’t have anything better to do.

6 thoughts on “Off Season weekends”