Ok before I recap the goings-on around here, first I have to post these pictures. This was one year ago today:

And this was on Friday:

Omg. OMG. O. M. G. By this time next year I think he might dwarf Henry.

Anyway, on to the weekend that went awry. I had entered a little local show, doing two dressage tests only (Prelim A and Prelim B). Which I think is the first time ever for us to do only dressage at a show. Or trying to, anyway. Apparently the weather gods also share my feelings about dressage, because Saturday morning dawned like this

LOL yeah nah. It stormed its ass off all morning, dropping upwards of 3″ of rain in some places. The showgrounds got over 2″ in less than an hour, rendering the parking area way too wet to get trailers in and out of, thus cancelling the show. Hey I tried, but I guess I’m just not destined to fancy prance, y’all. Which is probably good because to be honest I’ve never really done more than scan quickly over the Prelim B test before, and who the hell even knows where all the letters are in a long court anyway? Granted, I should probably figure that out before July since Coconino runs the B test. Details.

So instead of a dressage show, Henry did a lot of this: 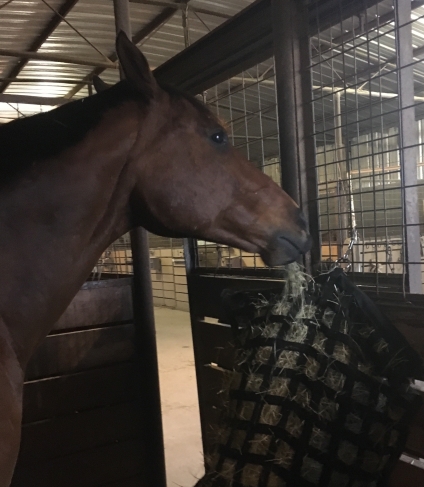 And I did a lot of this:

Bless these live streams. I was watching XC from Florida and XC from California side by side. And I love getting to see coverage of Prelim/2* stuff, which is much more in our wheelhouse than the typical 4*/5* stuff. Seeing how stuff rides, seeing the different questions, thinking about how they would relate to my own horse… it was fun. Also, California has got some really badass kids pinging around there on ponies. I was impressed. Maybe there’s a market for higher level sportponies after all.

The sun came out on Saturday afternoon, along with the wind, which helped start drying things up pretty quickly. Sunday was absolutely gorgeous, so I did that thing where I told the SO that I was going to the barn for a couple hours and it really ended up being like 5. Y’all know what I mean.

The colt-starter guy that’s been putting some basic miles on Cannavaro wanted to ride him out in the fields for the first time, so Henry and I tagged along with them just in case. He didn’t need us at all, that horse was absolutely foot perfect, super quiet, brave and happy to go anywhere with or without Henry, and really relaxed. The guy was even swinging his rope around on him for a while, then put him to work trotting around the hills, cantering circles, changing directions, working on his half halt and his whoa, etc. I continue to be extremely impressed by Cannavaro, not only his brain (which is maybe one of the best I’ve ever seen) but also his quality. This is a nice horse.

After a stretchy w/t/c ride with Henry, it was Presto’s turn. I put his bridle on again, which he’s starting to hate less. It’s also possible that I’m bribing him, the only time in his life when he gets treats (because he’s a walking MOUTH) is when his bit goes in. Don’t judge me, he’s basically a dog so food motivation works well. Either way, it was the easiest bridling yet, especially considering it’s been over a month since I last put it on. I also had to let everything out a hole. His head really doesn’t need to grow much more.

We went out and did some long-lining, attaching the reins to the bit for the second time. The steering is decent. I mean… it’s definitely better when he wants to go the direction I’m asking him to go, but it does work both left and right. And the whoa button has always been good with this one. We made some circles and figure eights, went over some poles and between standards, and then wrapped it up with a mounting block session. It’s so tempting just to slide a leg over. So tempting. I know I could and he wouldn’t care a bit, but alas we’re waiting until Fall for that.

So maybe it wasn’t the most productive weekend on paper, but the horses still got worked and I got some education via the live feeds. Definitely not a waste. Plus now I get to be like “Oh darn, totally tried to dressage but got rained out, omg sad.”. Totally believable, right?