This time of year always seems so busy, with shows and lessons and barnsitting and volunteering and literally anything I can do outdoors in that little sliver of the year when the weather isn’t scorching. This fall has been no different, with something going on every weekend since mid-September. I was starting to yearn for a day where I didn’t *have* to wake up before the sun (not that I can sleep past 6 even if you give me the chance, but still… I was craving the chance…) and this past weekend was finally a little bit of a break.

I did manage to fill up most of my Saturday with body clipping. The people I barnsit for are headed to their new Florida farm for the winter (luckyyyyy) and were scurrying to get everything ready, so I stepped in with some clippers to help prepare the horses for their trek. My victims were Toni (the stallion) and Tara, who were both impeccably behaved and very patient. A+ for behavior. I might still be digging black hair out of my eyeballs, but they’re both gorgeous and ready to go. Also considering I’ve body clipped Henry twice in the past month, I’m feeling pretty done with it for a while now. I used to clip A LOT to make some extra money (hustlers gotta side hustle) but I kind of remember why it wasn’t my favorite gig. It’s not the worst, but it’s not the best. Super satisfying though… I do kind of live for the moment when you’re finished and they look amazing.

On Sunday we got to go for a hack out in the fields with Hillary, who just moved to my barn. After being there basically solo (only english rider, and the only person who really came out more than once a week) for two years now, it’s kind of nice to have a partner in crime. Pretty sure I’ve already talked her into a schooling HT next month. It doesn’t take much arm-twisting.

Hillary’s mare Annie is living in the stall next to Henry, and while he likes to make ugly faces at her while he’s eating (that’s kind of his thing) I can tell that he secretly enjoys her company. Their turnouts are near each other and I swear he kept an eye on her for quite a while as he was grazing yesterday. That’s about as excited as Henry gets about the existence of another horse.

After we were done riding I pulled Presto out for groomies and decided to take advantage of the puddles in the arena while checking in with his lunging skills and voice commands. We will ignore the fact that I had to throw a rock at him to get him trot the first time (note to self: the “tr-OT” voice command button is a little rusty). I really need to find a lunge whip for this wild little stallion. Once he got going he perked up a bit, and seemed to enjoy splashing through all the puddles I pointed him at. He remains a superstar at “whoa”, screeching to a quiet halt within a few seconds from any gait. Maybe I should have bred more thoroughbred into this thing… 73% and “whoa” is still his favorite?

I even had enough time left over to play around more with some new things we’ve acquired lately. Like Henry’s fancy new Majyk Equipe superhorse monoflap girth. It’s so squishy. Definitely a massive upgrade from the extra-basic, no-frills, cheap synthetic I was using before. I’m excited to use and abuse it a bit more before I review it, and I still need to review the Majyk Equipe impact pad too. We’ll get there.

Henry was perhaps more excited to try out these new Flix treats, which are made entirely from flaxseed. No added sugar, no flavoring, nothing but flaxseed in all of it’s omega 3 goodness. I figured there was no way he would like these, considering how much he loves anything super unhealthy and sugar-loaded. Pretty sure Henry’s life philosophy is “when it doubt, cover it with molasses”. I was shocked when he chomped them quickly down and begged for more. Presto and the donkeys liked them too. I dunno what sorcery this is, but if Henry will happily eat some healthy treats, I will happily keep him stocked with a full supply.

On Sunday afternoon I got to catch up on a lot of reading, which lately has been primarily comprised of what I guess you could call self-help books for equestrians. I said I wanted to focus on improving the mental aspects of my riding, and I started that by ordering 3 books. I’m halfway through them and my mind is pretty blown. Some of the content is “duh”, some of it has made me stop and reflect, and some of it has absolutely left me reeling. This whole process is going to be it’s own series of posts, I think. 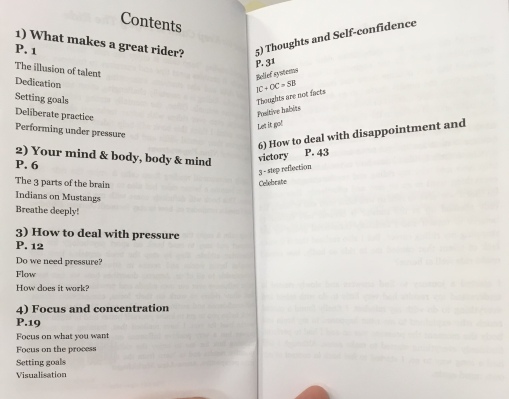 This week the focus shifts to getting ready for Texas Rose this weekend, the preparation for which will include but not be limited to: a jump lesson, re-learning the Prelim dressage test, shortening Henry’s ranch horse mane, figuring out how to stay warm while I’m camping considering it’s gonna be like 35 degrees (we’re all gonna die in dressage, y’all) and trying to apply some of what I’ve read so far in my books. We’ll see how any of that goes.

OH YEAH – also, I managed to leak Magic Cushion all over Henry’s sleazy… any ideas how the hell to get that out??

20 thoughts on “Playing Catch Up”