A lot can happen in 3 days a horse show, and this one was no exception. There were a lot of other extraneous things going on outside of the show itself that I wanted to talk about.

First of all, we tried Magna Wave for the first time. Yes we, because the practitioner let me feel it too, before she put it on Henry.

I was so fascinated with watching and asking questions that I totally forgot to take a picture. But Henry was licking and chewing within a minute of starting the session, and although we kept it light and short since it was his first time, he definitely seemed to enjoy it. I’d had some issues the previous few rides with getting him to connect in the right rein, and the next morning after the Magna Wave treatment he definitely seemed better in that regard. I need to look into the local MW person more to see what her prices and travel availability are.

Second thing – the cot. This was the first time trying out the new cot, and I figured it would be the perfect opportunity since it was supposed to be cold at night and the humidity is always so bad in Louisiana that if you tent camp, it ends up dripping condensation on you INSIDE of the tent. Waking up with a wet head/pillow at 4am is about as fun as it sounds. I learned my lesson about that the first time we were here 2 years ago. Not doing it again.

So I cleaned out the horse part of the trailer, laid a tarp down over the shavings, and set up my bed. First was the cot, then it’s cushion, then a top sheet, then a fleece blanket, then a quilt, and then I opened up a sleeping bag to serve as a comforter. I pulled the door mat out of the dressing room to put inside and voila – I had a decent little space. I was pretty darn comfortable back there, and the cot worked out well. I’m a splayed-out stomach sleeper, so I do wish the cot was maybe 6″ wider, but I slept well anyway. It was nice being able to completely close up the trailer to keep some of the chill out, especially on Friday night when it dipped down to 45 degrees. I think the cot will be a good viable option for when tent camping isn’t so practical, so in that regard it was a successful test run and totally worth the cot’s $50 purchase price.

Next up on this recap of randomness, we have a video of Henry eating a Pop-Tart, which he LOVES, but I don’t give him often. I had run out of treats and this was what I had as backup. What, you don’t keep emergency Pop-Tarts in your trunk? Weird. Wondering why the hell I’m showing you this video? He got the Pop-Tarts to hold him over until I could go get my wallet and run to one of the vendors to buy him some more. I wanted you to see what led to the circumstances I found myself in, how it started with the purely innocent goal of buying my unicorn some well-deserved treats. SURELY YOU SEE WHERE THIS IS GOING.

Yeaaaaah so I bought cookies… and new dressage reins. My only real complaint about my Eponia bridle is the stupid rubberized web reins that came with it, but I never have gotten around to replacing them. On Friday I spent what felt like 3 hours cleaning those stiff, stupid things before giving up on getting all the dirt out of the webbing, so on Saturday when I went to get Henry some more cookies and saw the Kavalkade soft reins (because one does not just walk into a mobile tack shop without browsing just a little, right?), I was sold. 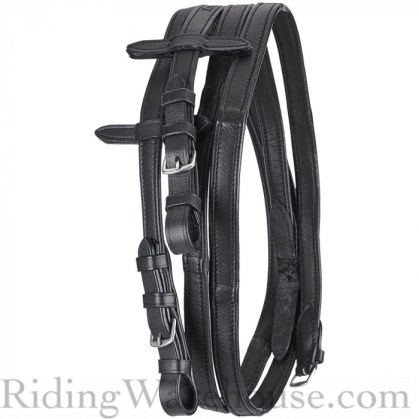 Well ok, I told the vendor that I would buy them only IF she removed the stupid martingale stops for me, which I also never remembered to do with the Eponia ones. She pulled out a knife, sliced through the stitching on each one, and I got myself a new pair of dressage reins. I’ll do a review once I use and abuse them for a while, but Riding Warehouse also carries them in black and brown in a 3/4″ width and a 1/2″ width. I think I’ll set the Eponia reins on fire and laugh maniacally while I watch them burn. Just kidding. Probably.

On Sunday morning I started prepping Henry’s stud holes early, and I’m really glad I did because as soon as I picked up the left hind I knew we had a problem. Somehow he had twisted his shoe about 1/2″ to the inside and stepped on the clip. He was totally sound on it and didn’t even seem to notice, but clearly I couldn’t run him XC like that. I called the show farrier and off we trudged to meet him at his truck.

He pulled the shoe off, noting that luckily the clip had stayed in the wall (right where the nails typically go) and didn’t make it any further into the hoof. Henry had an ever so slight reaction the first time he clamped down with the hoof testers, then nada. I asked him whether he thought I should scratch (he’s from a family of eventers so I trust his opinion) and he replied with a very emphatic heck no, but maybe pack the foot with Magic Cushion overnight in case there’s any latent soreness there. I do that anyway after XC, so no biggie. This farrier is very good and has actually mentored my own farrier quite a bit, so he asked me to take some pictures with a couple of slight changes he suggests my farrier make. He bent the inside heel of both hind shoes in a bit more to help prevent Henry from being able to step on himself as easily back there, and then had to re-tap to make sure the stud holes were still good after that. It was NOT a cheap show farrier visit, but he got the twisted shoe fixed, addressed why it happened, we got a bit of a “consultation” if you will, and Henry trotted off 100% sound.

Speaking of Henry feeling fantastic, he also looks pretty darn good right now. He’s FIT and he’s strong, and I’m really happy with his overall condition. He must be feeling as good as he looks, because on Sunday morning before XC I tried to take him out to graze and all he wanted to do was drag me to XC warmup and stare off into the distance at cross country. He knew exactly what it was and that it was his next phase. Henry is normally relatively chill in XC warmup, and always stands very quietly, almost looking asleep, in the startbox… not this time. He was spring-loaded and I had to circle through the box until our 10 second countdown. He exploded out of there, ears already on the first fence. I think between his fitness level and the temperatures finally cooling off, he’s pretty full of himself. He really feels like a horse that understands his job, and seems confident about it and happy to do it. I came away from this show feeling very satisfied with where he’s at, mentally and physically, and that’s what’s most exciting to me.

43 thoughts on “Holly Hill HT: The “everything else” part”