Is it just me or are some horses getting way hairier this year than normal? Admittedly, Henry maybe isn’t the best gauge of these things, considering that he’s a hairy horse in general, but I’ve now body clipped him twice already this fall, with the second clip coming just two weeks after the first.

His leg hair, which is always fairly draft-horse-esque, is already long enough to braid some dang cornrows into, if you were into that kind of thing. It billows in the wind, all gross and golden against his black legs. I flat out refuse to clip his legs though, mostly because he is really good about the rest of his body yet a complete freaking turd about his legs. For real, it used to take me twice as long to do his legs as it did to do the rest of him. But also because I’m an eventer now, and I consider one of the biggest perks of my changeover from h/j land to be the whole “not clipping the legs is totally normal” stance that they have. I am all about that.

Henry gets hot so easily that I always try to keep his coat pretty short, so I do probably clip him more than most people would find necessary. Still though, I got almost as much hair off of him on the second clip as I did on the first. Seems like a lot more than normal for the end of October.

Meanwhile, baby horse has been a little slower to launch into Yak Mode. His hair is getting long, but nowhere near what he was sporting last winter. Of course, it’s early yet. If he’d like to grow that 6″ of plushy ridiculousness again (please don’t), I suppose he has plenty of time.

As an aside, you might spy the farrier in the above photo. Poor guy was here on Monday to do both boys and then back AGAIN on Tuesday, because SOMEONE named HENRY decided to pull a shoe off literally SIX HOURS after getting his feet done. And I tried looking for it in the tall grass but yeah right, that was a lost cause. I don’t know where he threw it, but it was somewhere far and well-hidden. Poor farrier had to come out the next morning and make a whole new shoe, clips and studholes and all. I really appreciate him coming so fast though (and being so darn pleasant about it) considering we’re leaving for Holly Hill tomorrow. Where I get to try out my newest acquisition: 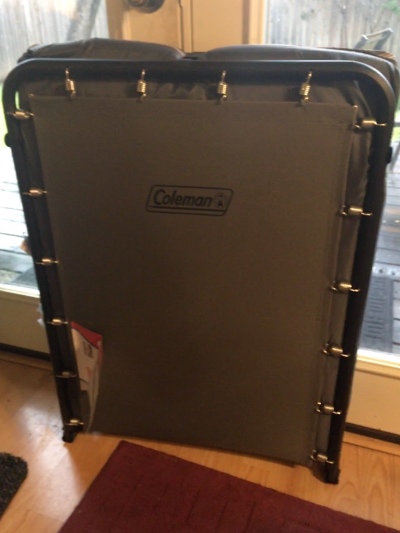 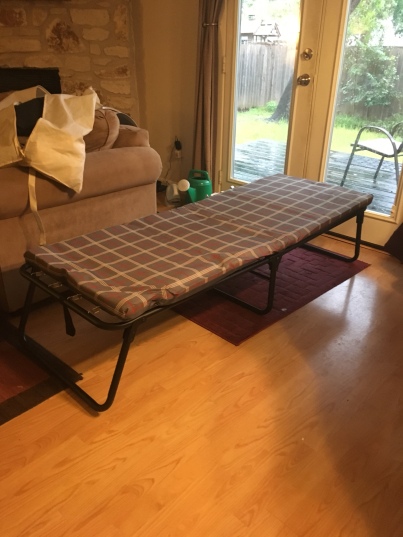 Yep that’s a folding cot. I tried a little twin air mattress for when I want to sleep in the trailer itself (like if it’s cold or raining, and camping in the tent seems unappealing) but at Willow Draw that stupid thing deflated on me every two hours during the night. I feel like I don’t really have to tell you how annoying that was and how much I hated air mattresses by the next morning. This weekend we’ll try out the cot instead… at least it can’t deflate?