We all know what good sportsmanship is, I’m assuming. If not, see definition conveniently located above. To me, having good sportsmanship is almost as important as having good horsemanship. Nobody likes a bully, a whiner, a condescending winner, or a sore loser. And I’m proud to say that in eventing, I don’t think I’ve seen very many examples of poor sportsmanship as it relates to competition. Most people have quite a good attitude. It’s the kind of sport that humbles people real quick and always keeps you feeling quite mortal. For the most part, people generally want to see others have a good day and are encouraging and positive.

I saw a slightly different side of things at Chatt. Not related to the horse show itself, luckily, but in regards to – of all the ridiculous things – the totally “for fun” bouncy pony race on Friday night. You know the big bouncy ball pony things? 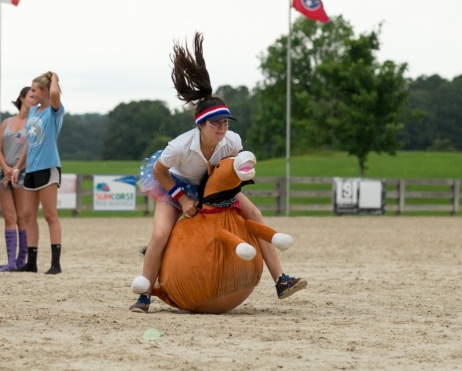 Teams of 5 people each squared off on bouncy ponies in a relay race where each person raced down over a “jump” (pole on the ground) to a bucket, picked up an apple, raced back with said apple, and tagged the next team member. The only rules? You had to bounce on the pony, and you had to get the apple. Pretty simple. Fun, right? Especially if you’re the one watching (me) and not the one going face first over the front of the bouncy pony in some kind of weird, hilariously funny, slow-motion rotational fall (Kate).

Our barn conveniently had 5 girls under of the age of 18 in attendance at Chatt, so we had an instant team. I’m too old to go flying off a bouncy pony, but I make a pretty good cheerleader on the sidelines. Trainer, of course, acted as Team Coach.

Our girls went all out for this. They range in age from 12 to 17 years old, and they looted an Alabama Walmart on the day after the 4th of July to get stuff to make their outfits. They made tutu’s, they sported patriotic hats, stickers, face paint, sweatbands, glow necklaces and bracelets… you name it, they had it. Outfits: on point. But really, all of that just showed a lot of camaraderie and team work. They were excited and they were ready to go head to head with the other teams and duke it out – in a fun way. They might not win, but they were there to have fun. That’s the entire point of stuff like this, right?

So when I saw an adult member (I’m assuming she was an adult, since she chugged a beer right before the race) of the team next to them yelling at one of our girls (a 13yo), getting right up in her face, and then pulling the hat right off of her head – taking some hair with it, I might add – I was shocked. When members of this same team picked up some water balloons from another team (water balloons were not part of this activity at all, but okay) and chucked them deliberately at our girls’ faces – shock turned into fury. Those people did not know our girls. That wasn’t jovial or friendly or funny. It came across as mean-spirited and inappropriate and out of line. At a friggin bouncy pony race! The prize was a big basket of chocolate, for crying out loud!

I have all of this on video, by the way, so there’s no disputing what went on.

To cap it all off, the teams were neck and neck until their last team member (the hat-yanker) decided to eschew the rules and just run her entire leg of the race carrying the bouncy pony instead of actually sitting on it at all. A person on this team was also later heard saying “there’s nothin’ wrong with cheatin’!”.

If that team had been comprised entirely of kids then ok, sure, kids are definitely jerks to each other sometimes. But there were adults participating in and witnessing this behavior. To teenagers. That they don’t even know. Their attitude and their actions really kind of stunned our girls, who know better than to ever act this way toward other people in any kind of competition. Luckily they are all good humans and they did not retaliate in any way, but it bothered them, and it ruined the good time.

It wasn’t so much that the other team cheated (which was lame but who really cares about a bouncy pony race?) it was how they went about it and the behavior that was displayed.

To me good sportsmanship does not start and stop as you pass through the ingate on the back of a horse, it’s something that should be on display at all times. ESPECIALLY if you are an adult. Extra-especially if you are an adult among children. Good sportsmanship comes from who you are as a person. It takes class, it takes humility, it takes kindness, it takes empathy, and it takes strength of character. I was happy to see that our girls displayed those things, even if some other folks didn’t. It’s not about whether you win or lose – it’s about how you do it. Maybe that team didn’t intend to come off this way, but they did. If nothing else, it’s a good reminder to all of us that in competitive situations we have to be mindful of the things that we say and do, and how those things might impact others.

What do you guys think? Ever seen behavior like this at a horse show? How important is sportsmanship to you – on and off the horse?

20 thoughts on “The Importance of Sportsmanship”