My stadium time was only about an hour and a half after dressage, so I didn’t have a lot of time to waste in between phases. Or, alternately, a lot of time to stress about stadium. We saw the course for the first time that morning, walked it, and then went off to do dressage things. I kind of prefer that.

Henry wasn’t even sweaty after dressage (the weather on the 2nd weekend was SO MUCH NICER than the first! It was cool and overcast and breezy.) so I didn’t bother bathing him. I also didn’t bother looking at scores. I was happy with the test he’d put in, so what did it matter? I went and watched a few Prelim rounds to get a feel for how some of the lines were riding, then by the time I cleaned him up, changed all my tack, and got us both ready, it was time to get on.

While my ultimate goal for stadium is always a clear round, my REAL goal this time was to not make any stupid mistakes. Specifically don’t crash, or don’t do something so stupid that my horse can’t bail us out. Aka don’t repeat Week 1’s performance.

When I first got on, Henry still felt really quiet… a little bit behind my leg and just not as sharp as usual. I figured the previous 10 days were catching up with him, so I opted to take my whip with me in the ring (I usually don’t) for some extra oomph. Turns out, all that really did was make him more flat and strung out, so… maybe not next time.

Some of the rounds I saw before mine had been pretty rough. Really, a large percentage of the rounds I saw all day were rough. The courses were quite demanding, and rails fell left and right in every division. I haaaaated the start to our course – an oxer to vertical line coming diagonally across the ring, followed by a quick 8 bending strides to another oxer heading directly at the gate. I mean… way to come out swinging? Who made the course designer mad? 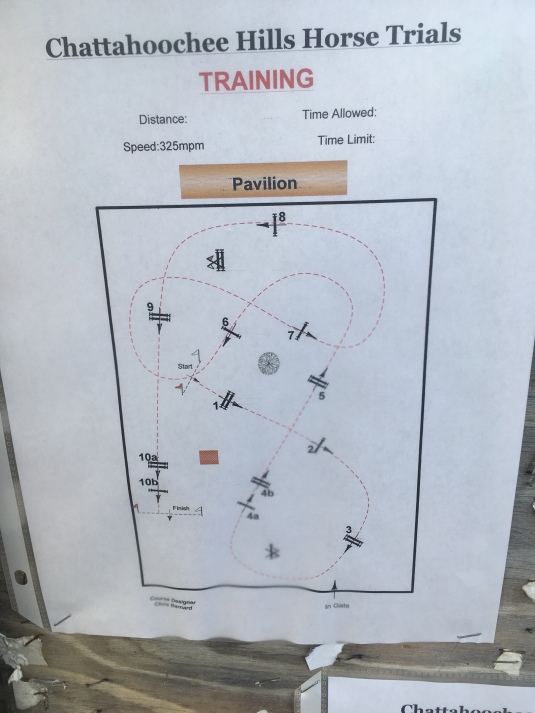 That rode fine though, and then we turned up to a double in the same spot as the one I messed up the first week. This time I didn’t mess it up (yay, redemption!) but I didn’t whoa enough in the line after the double, causing us to get a little too close to that square oxer and taking the front rail with us. Womp womp.

The rest of the course actually rode nicely though. The weird little rollbacks toward the end of the course were just fine (sat up! did not pull!) and Henry jumped them well. The last line was a little oddly placed but we got in fine, and came down to the last double – oxer to vertical. By this point Henry was just a little too flat. He tapped the oxer, but it stayed up, then tapped the last jump, and it fell. Womp womp again.

When I was in the warmup Trainer asked if I knew my dressage score and I said no. She asked if I wanted to know before or after stadium, and I said after. I don’t need incentive to feel pressured! So I was kind of bummed when I came out of the ring and she told me, and found out we’d been in third. Adding two rails to that sucks. But most of the division fell victim to that course, so I still only dropped from 3rd to 6th.

At least I didn’t try to kill us this time. Baby steps?