One of the items on my crazed list of weekend activities was a course design clinic with Eric Hasbrouck. I fully admit that I was only in attendance for about half of it… by the time we closed up the shop and got some food, we got there a bit late, and then we cut out a little early to go watch the handy round of the derby. My notes are a little light, but it was still interesting.

None of what he said was a major revelation to me, I’ve heard it before, but it’s definitely been a while since I’ve dedicated any real brain power to SJ course design, so it was a good reminder. In the beginning he spoke a lot about how it’s important to design courses appropriate for the people that are showing… like a Grand Prix the first week of WEF is going to be softer than a Grand Prix near the end of circuit. Or never put a 2 stride into a speed class or jumpoff for an under 1.10m jumper class, because without fail someone will try to leave a stride out and end up crashing. Or how, since he was new to the Texas crowd, he designed the courses a little bit friendlier the first week, like putting a more difficult question going toward the ingate, so he could feel it out a bit before ramping up the challenge.

Then he talked a bit about the jumps themselves and how the horse’s see them.

There was also some discussion about a movement that some riders are championing, trying to get open water jumps taken out of the sport. Eric is very against this and thinks that the open water is a staple, and should stay (I agree with him there). He said that instead, we should be working on introducing these jumps a lot sooner in a horse’s career, in smaller and easier-to-jump versions, so that they don’t end up 7yo and thrown into a class with a full size open water and be caught unprepared. He said that in Europe horses start seeing them a lot sooner in their competitive career, so by the time they get to the real GP with a real open water, it’s not a new concept to them. 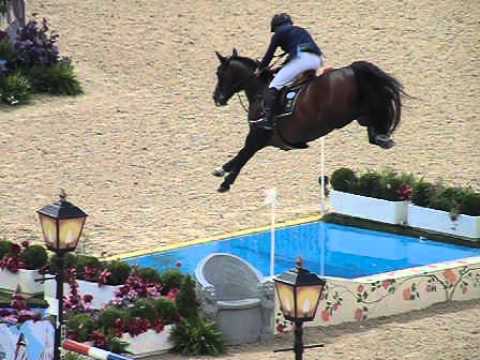 He was also a big proponent of keeping variety in the courses, and bringing back some of the more old-fashioned fences. He said that this year he used a hedge oxer at WEF, something that used to be very common but isn’t seen much anymore, and included walls as much as possible. He expected riders to be a little up in arms about the hedge oxer but actually got a lot of people that loved it, and enjoyed seeing something different in the ring. He is not a fan of how most of the courses look so cookie-cutter these days, and thought it was really important to preserve the types of fences and courses that you see at places like Spruce Meadows and Aachen and Hickstead.

He also talked about the fact that time is much tighter than it used to be, and courses are wheeled on a higher speed. This is mostly due to the fact that everything is so much more competitive now, and the footing is so good that you CAN set these higher speeds without it being dangerous. BTW, he thinks it’s also very important for riders to know and understand how to think in METERS, including meters per minute for speed and what 350mpm vs 375mpm vs 400mpm feels like. Not just an eventer skill!

I wish I could have stayed for the whole thing, Eric was interesting to listen to, and if nothing else he’s definitely re-ignited my brain as far as how closely I look at our showjumping courses to understand the questions the course designer is asking. You can bet that I’ll be looking at them with a bit more of an analytical eye! Yeah sure, a lot of it isn’t applicable to me (like… don’t have to worry about jumping open water) but even just as a spectator, knowing these things makes it a little more interesting.

I know that this clinic was live-streamed but so far I haven’t been able to find a replay of it anywhere. If I do, I’ll come back and add the link.