Okay and maybe Friday and today count, too. It’s been a very testosterone-filled last few days in general.

It all started on Friday, with barnsitting. The herd includes the trakehner stallion Kovington, aka Toni. He is big, black, beautiful, and super weird, so of course I love him. 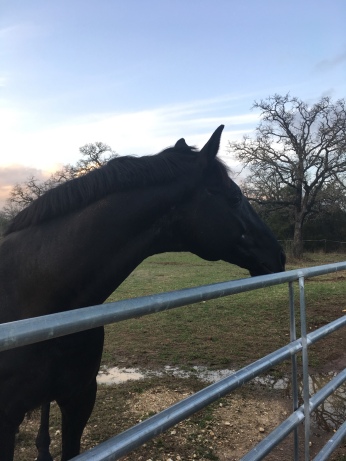 But I also spent a ridiculous amount of time and got up stupid early to watch stallions. Usandro’s owner had alerted us to the fact that he would be at the Saint-Lô stallion show in Normandy on Saturday and Sunday, so of course I went to digging. I found out that clipmyhorse.tv was live streaming the event, and I located a program and order of go on the facility’s website. Watching Usandro was going to be a highlight, of course, but there were several other stallions in attendance that I wanted to see. And since France is 7 hours ahead of us, this required setting my alarm for 4am on Saturday. When does interest cross the line into obsession? Probably there. 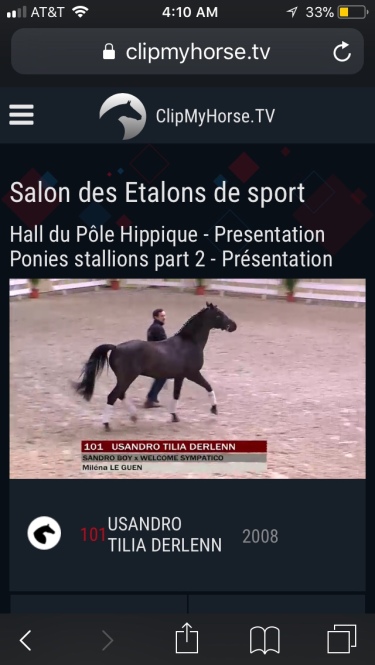 But I got see Usandro and a couple others in the stallion parade, then got up and ate breakfast and did some chores before logging back in on my computer to catch a few solo presentations of some of the others that I was interested in. Like the Heraldik xx son Herald (he’s related to Presto!). I am clearly biased toward anything with high % TB, especially a Heraldik, because I loved him.

And there was also Luigi, who we met at Tal Milstein’s stable in Belgium. He is ridiculously nice, definitely a horse to watch for the future.

After another break to muck stalls I was back inside on the computer, just in time to catch the LEGENDARY Diamant de Semilly. He looks pretty good for 27.

And then there was Diarado, who was REALLY REALLY pumped to be there. I swear, some of these older stallions that are retired from competition and at the beginning of breeding season… they were horse kites. Diarado accidentally dropped his handler though, which I admit I spent most of the day watching the video and chuckling about. Gotta give the guy credit, he had a very quick and athletic recovery (although he mostly stuck to walking Diarado after this… probably wise). Maybe a lunge line instead of just reins attached to the super excited stallion next time, eh?

Usandro’s owner also posted a few pictures of him meeting his maternal grandsire, Welcome Sympatico, that really made me wish I was there. Add Saint-Lô to my bucket list of horsey events that I want to attend at some point. February in Normandy seems fine by me. 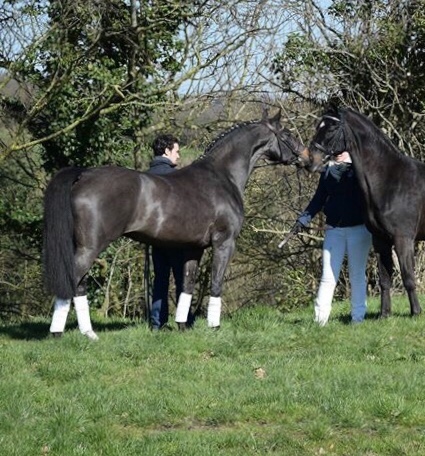 On Sunday I set my phone to 4am again (I repeat – is this a sign that I’ve totally lost my mind?) so that I could catch Usandro’s actual solo presentation.

And then a couple horses later was MIGHTY MAGIC!!! I was really excited to see him “live” since of course I’ve only seen promotional videos and competition videos of him before. He was a bit tense but still impeccably behaved. I was quite disappointed that Clipmyhorse had his pedigree information wrong though (he is clearly NOT an Ampere x Jazz, come on guys) and the English commentator guy spent the entire presentation talking about bloodlines that aren’t his.

Clearly he didn’t have an information sheet on Mighty Magic either, because he never mentioned any of his accomplishments (um hello, 7yo eventing world champion, French national FEI Children’s dressage champion, sire of eventers up to 3* level???). I have to assume that they had it right at the stallion show itself, or it would have been quickly corrected, but the Clipmyhorse feed never realized their mistake, so MM got totally gypped on that end.

I loved him just as much as I always have, though. Which I guess is probably a good thing, since I have a foal by him now. I really need to make a point to see him in person the next time we’re in France.

After another break to do chores I was glued to the live feed for the rest of the morning (again) and got to see all kinds of “big ones”, like Plot Blue, Malito de Reve, Big Star, Canturo, Monte Bellini, Qlassic Bois Margot, Upsilon, Cristallo, etc etc.

For a breeding nerd like me, it was captivating. I wrap up barnsitting today, so one more afternoon with goofy Toni.  Granted, I’m a little tired from lack of appropriate sleep, but hey… my alarm not going off until 5 this morning was kind of nice.

8 thoughts on “Stallion Saturday. And Sunday.”