Normally the vast majority of our XC schooling adventures take place at Pine Hill, or sometimes MeadowCreek. Neither of those facilities is particularly close to me – both are two hours, just in different directions – but they’re definitely the closest. Everything else is 3.5 hours or more, which makes it a bit more of a production. Sometimes a change of scenery, and jumps, is important though, especially for schooling. You can only jump through the same water complex so many times before you’re not getting a whole lot out of it anymore. So this past weekend we got up early, loaded up, and hit the highway to head north to Willow Draw near Fort Worth. 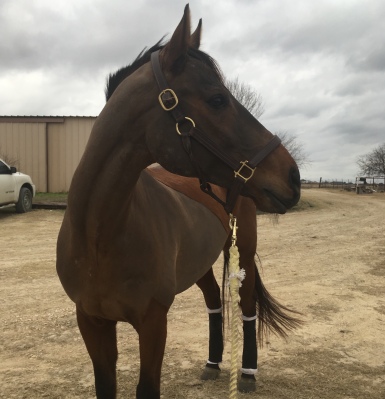 I loaded Henry up on omeprazole and gave him a nice fat haynet full of alfalfa, but apparently I need Regumate or something for his grump ass. He decided that he needed to out-estrogen the mare he was riding with (who never so much as even moved a muscle or made an ugly face at him at any point) and spent a lot of the time kicking and being a general turd. I have no idea why he sometimes does this. He did it in Bobby’s trailer while hauling with Halo a few times, albeit sporadically. Other times he rides with other horses just fine, so I thought maybe it was something about Bobby’s trailer (or Halo) that he was taking occasional objection to. Apparently not. I just own the most marish gelding on the planet. He rides like an angel in my trailer, and in fact had just been in mine a few days before to go to our dressage lesson. That day he kept his head buried in the hay net and I never heard a peep from him, which is his typical hauling demeanor. Guess maybe he just wants his own private chariot? I don’t know wtf his problem was on Saturday, but we got there and he had a fat left hind from all the kicking. Luckily he looked sound, so I decided to get on and see how he felt, and if anything he felt… great. Let the XC schooling commence.

One thing I was really wanting to work on was combinations. Lately we’ve jumped a lot of height, but nothing has been particularly technical. We have no problem galloping down to a big fence anymore, but we haven’t been able to practice much terrain or adjustability in combinations. And pretty much the very first combination we did proved why we needed the practice. It was a small N table, right turn to a half coffin, house to ditch. On the first attempt Henry landed from the table and totally flipped me the bird on the half halt and fought me the whole way down to the house, which… didn’t work. On the second attempt I had to get a bit more aggressive with the half halt than I would like, but he listened and jumped through it well both directions. After that he was much more obedient about whoaing when I said whoa, dammit.

We headed over to the first water complex, initially jumping just one down bank into the water by itself, then cantering out and coming back to the other down bank with a rollback in the water to a small bending line out of the water. I wasn’t sure how he’d be about jumping down into water, even as recently as last year he could be weird about it sometimes, and I for sure thought there was no way we’d make a good roll back to the bending line. That took a lot of organization and control. He really surprised me though, first by jumping down into the water pretty much textbook

and then by making the downbank to bending line rollback feel easy. I was able to just close my left leg as we were landing and he turned right around.

His typical down bank style has always been to take a flying leap off the damn thing, so I was particularly happy that he took a couple trot steps right at the base and balanced himself before dropping nicely down. It seems that he’s taking the time to think about them more, rather than just flinging himself off into space. We’ve been trying to get him to do that for literally years. Those flying banshee leaps start getting you into trouble when banks are part of a tricky combination, so I’m encouraged that the inclination seems to be lessening.

Then we went over to the stone tables and weldon’s walls, jumping the N ones first, then the T ones. These are gallop fences, Henny’s specialty. Easy peasy.

After that we went over to the combinations at the mounds, which I was really excited for. Their mounds are steep, with fences at the very top, and then Training and Prelim have bending lines to a corner at the bottom. It’s a very legit question for the level. I thought we might have an issue here. And we did, but it was with my inability to ride up the mound correctly, not with the jumps themselves or the downhill bending line to the corner. Derp. Henry had no issue with any of it. Once I got the idea of where was the right place to half-halt and where was the right place to push, everything rode great.

We hopped over the trakehner on our way over to the other water, which I’m pretty sure Henry doesn’t even register as anything more than a hanging log anymore. When we got to the other water we made a little course taking the N route through first (which was just cantering through the water and out over a coop), then looping back to a small bank down into the water, then coming back through the Training route, which was a log vertical, 6 bending strides up the island, two strides across to a drop back down into the water. Another really legit question for Training. The first couple times through I just wasn’t aggressive enough, and we kinda creeeepppttt through the combination. Henry humored me, because he is Henry, but it wasn’t smooth. Finally I remembered to use my damn leg and ta-da, just like that the distances all worked out great and the thing jumped super.

We also kept cantering up the hill and jumped the very skinny Prelim log that has a hell of a downhill landing, which he was great about.

Overall I’m super happy with how he’s feeling on XC right now. He’s getting a little bit smarter and more clever, and looking really confident. I need to be faster and more assertive with my half-halts in some of the combinations, and I need to be more supportive with my leg in the ones that naturally back him off. So basically… ride better and smarter. Got it. Here’s the full video if anyone is so inclined… the gif maker was giving me trouble today:

He kicked a little bit more in the trailer on the way home, and I iced and poulticed it Saturday night. It looked better yesterday but still kinda puffy, so I iced and poulticed again. We’ll see how it looks today. He’s still sound, so I’m thinking (and hoping) that he just whacked the crap out of it but didn’t do any real damage.

13 thoughts on “A change of XC scenery”