Said no one ever.

Can I annoy everyone and complain for a minute about how frustrating it is to have a horse that fits perfectly into the most basic panel that Devoucoux makes? Mostly because I’m shopping used, and it seems like pretty much no one else has a horse shaped like mine. If he had giant withers with hollows on each side, we’d be in business. That panel configuration is EVERYWHERE. Alas, he does not. Although I guess I should take a minute to seriously thank Henry for being shaped like a French tree at all, because I’d be infinitely more sad if he wasn’t. 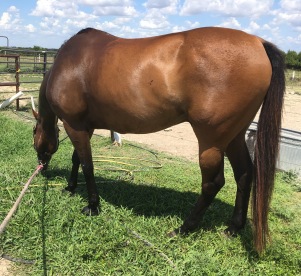 I knew as soon as I sat the Chiberta on Henry last week that it didn’t really fit. It has a 4P panel, the most popular modification I’ve found, which means there’s extra padding in the front part to accommodate a high shark fin wither. Henry doesn’t have a shark fin, but he has a decent wither on him, so I figured it was worth a try.

I could tell as soon as I put it on him that the panel wasn’t right. Sticking it on top of the Ogilvy seemed to improve the balance enough to where I at least felt ok doing a quick ride in it, to at least see how it felt. And as soon as my butt hit the saddle, it was everything I remembered about Trainer’s saddle. Absolute grippy French perfection. For me it was a perfect fit; love at first sit. Deeper love at first gallop. Henry offered up no objections, either. But… that panel…

So when I saw that our Devoucoux rep, Janine, was going to be in my area on Friday anyway, I asked if she would come out and check the fit. I knew it wasn’t going to work as-is, but… maybe she was a miracle worker? Maybe she could offer me an option to make it work? Or, hey, maybe she had something perfect in her inventory. I dunno. I was desperately clinging to some delusional dreams here. This is the price you pay for loving a delightfully molded memory foam panel.

But of course, as soon as I tossed the saddle up there, the rep saw the exact same issue I did and said it was a no-go. I could technically have it re-paneled for $650, but at this point that’s just not in the budget considering the saddle itself was already near the very top of what I could spend. Shout out to Janine here: I am a super annoying person with approximately 9000 questions, and she was super nice as she thoroughly answered each one, both in person on Friday and the ones I’ve sent via email in the past few days.

Since she was already out there I asked if she would check his dressage saddle. To my eye that thing has always been a near perfect fit on him, and he’s always gone REALLY well in it. It has just a plain D3D panel, no modifications, so basically it’s as “off the rack” as a Devoucoux gets. 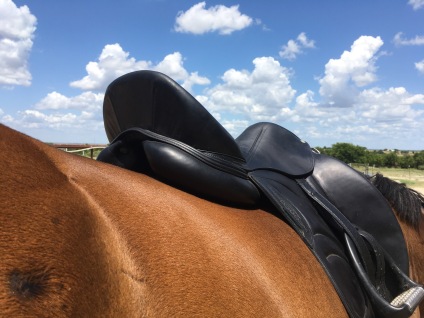 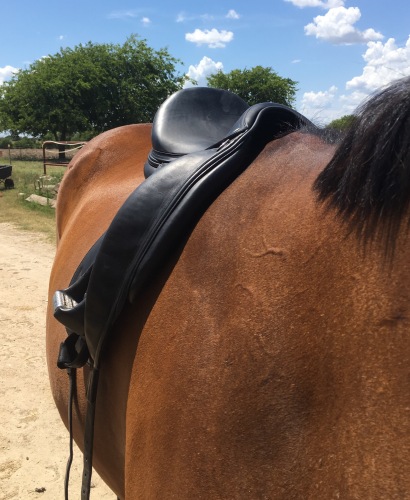 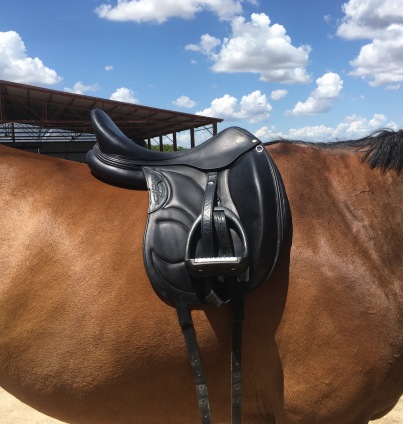 Pretty much the second she settled that thing onto his back she was like “Wow… yeah… this is the perfect panel for him.”. Ok, so that’s one half of the equation down, we know exactly what Henry needs. But what about me? The 18″ 2AA had felt pretty perfect but, since she was there, I figured I should have her see me sit in it, and figure out if maybe I could fit into a different configuration to open up my options.

She looked through their used inventory but didn’t see anything that met both our specs. Apparently it’s not a very common one, and when it does pop up, it gets snatched pretty quick. If we needed a 4P panel or if I could fit into an A flap, we’d be in business, but alas neither of those things work. I spent most of the weekend scouring every corner of the internet and came up with nada. But now I’m on “the list” with the rep, so to speak, so hopefully something in our specs will come up soon. Like… really soon… because I don’t have a jump saddle at all at the moment.

It sure was sad when I had to put that saddle in it’s box and send it back, though. Our relationship was brief, but our love was real.

23 thoughts on “Saddle Fitting is Fun”