Sadie had her 15 day check yesterday and she is IN FOAL to Diarado!!!

And thank goodness for that. I know this wasn’t the originally planned cross, but I’m pretty excited about it… I think whoever buys it will end up with a really interesting prospect. The Diarados are generally quite ammy friendly and nice athletic attractive horses, and they’re popping up in the higher levels of every jumping discipline. There’s a lot to like about that. Plus he’s another stallion that doesn’t have a red gene, so no chance for chestnut. Win/win.

So, no full sibling to Presto next year, but a Diarado is a pretty damn amazing consolation prize. Fingers crossed of course that the pregnancy sticks and results in a healthy foal, yadda yadda yadda. Maybe she’ll decide to make a filly this time? She’s 2 for 2 in the colt department.

As for the little man himself, Presto has been doing a bit better. There’s not much to report with him really, rhodococcus is a slooooooow recovery that’s more about managing the side effects of the antibiotics. There is a bit of improvement though, so we’ll take that. 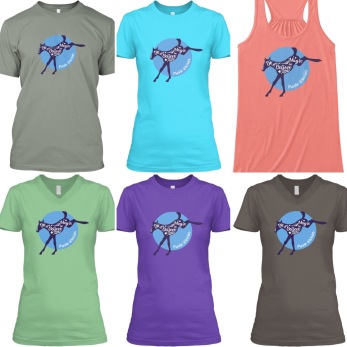 For those who were asking for a second chance at shirts, I’ve relaunched the store with a few little tweaks, mainly a minor design change, more shirt options, and lots more color options. I tried to find a place with tech shirts but that just didn’t work for lots of reasons, so I’m sorry but I couldn’t accommodate that request! I did find out that It’s a Haggerty’s can embroider the logo on a custom sunshirt though… I’d be happy to send the file to anyone that’s interested in that. It makes me really happy to see so many people rallying around my little dude and wanting to support him. I’ve said it before but I’ll say it again – y’all are the best. ❤