I picked up Betty the trailer from the painter the evening before I left for AETA, so this is the first I’ve actually had time to sit down and put her pictures together from start to finish. Now that the transition from Black Betty to Betty White is complete, it’s time to recap the process.

I bought the trailer from a blog reader/friend for next to nothing. It definitely needed work but had good bones. The layout was exactly what I wanted (I ❤ a 2 horse straight load with a ramp), it had a good floor, was structurally sound, and the lights worked. Ya know… the basics. However, she did need a lot of minor things and aesthetic help.

I started by having the roof fixed. There was a lot of corrosion on the sides where the roof met the body (some googling revealed that apparently there was defective roof sealant with several model years of this trailer, so I’m assuming that’s what happened to make it corrode so much faster than any other part of the trailer) and I was given two options: put on a new roof, or patch the sides of the existing one. A new roof was more than twice as expensive, and the corrosion was only on the sides, so patching was the better option for me. The metal guy patched both sides of the roof, some spots along the front, and sealed up the open vent holes in the top. He also fixed and re-ran some sketchy looking wiring, replaced some of the floor in the very front part of the trailer, replaced the wood on the walls, added two new lights, and put plexiglass back into the front windows (it had none).

After that I ordered some new bits and pieces from Horse Trailer Accessory Store, including some reflective tape, a new coupler pin, new pads for the walls and chest bars, etc. I also got new rubber mats to put on the walls over top of the wood, and got 4 brand new fancy wheels put on.

The last major thing was the paint job – I didn’t want to haul Henry around in a black trailer in the Texas heat – so Betty went from black to white. 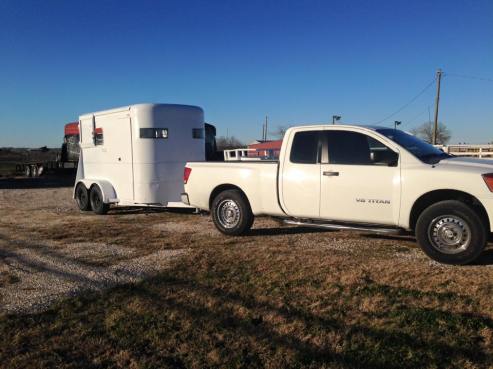 Now that she’s “done” and totally road worthy, I found a few more little things I want to do (like mount the spare tire to the outside, put new mats on the floor/ramp, and get new butt bars), but those can happen over time. Pretty damn excited to have a basically “finished” and road worthy trailer! Total investment? About $2000. The freedom? Priceless.