Boy, I really left y’all hanging there didn’t I? I fully intended to come back and write another couple update posts while we were still at Coconino, but to be totally honest I was having a really good time immersing myself in my horse life and enjoying my showcation, and I decided to take advantage of the break. My mental health really required that I just decompress for a bit and let everything else fall away, so I did.

In short, Coconino was fantastic. Flagstaff is so beautiful, the weather is so nice (the locals thought it was hot – LOL), and it was really great to put everything else in my life aside for a while and just have fun with Henry. Every time I think I can’t possibly love that horse any more than I already do, he gives me even more of himself. It’s incredibly humbling to feel how hard he tries for me and how much he loves his job. I will get into the show recap in subsequent posts, but he gave me the absolute ride of my life on cross country, and it’s one I don’t think I’ll ever forget.

In between the first and second show, we snuck an afternoon away for non-horsey things. We drove down the mountains to the city of Sedona, did some touristy things, ate some food, and enjoyed the down time. It’s amazing how a short 40 minute drive brings a complete change in the scenery. I’m not generally a lover of the Southwest or the desert, but you have to admit that Arizona is beautiful. 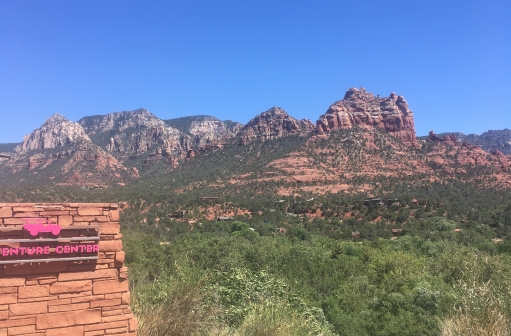 On Wednesday I did a schooling jumper round, because it had been a while since we’d jumped a course. Henry was WILD but went in there with his tail on fire and had quite a good time. I think after the first week he was wondering exactly WTF we were doing here, since he hadn’t shown yet. That whole first week I rode him twice a day, one quiet stretchy hack and one actual ride, generally flat work since he was a complete IDIOT out there on the track for those first several days. I was definitely glad I’d chosen not to show week 1 and let him settle in, and he did finally relax, but boy he was glad to see some jumps after all that dressage.

Henry likes to put up a grumpy, detached persona, but I think he enjoyed having extra attention. He let his derpy personality hang out and made some new friends, which garnered him lots of extra treats throughout the two weeks. I was worried that he’d be a lunatic about Dobby, since they’re turned out together at home and trailered to Coconino together, but we put them on opposite sides of the aisle with some trailers in between that blocked the line of sight, and they settled after the first few minutes. It ended up not being a problem the whole time, which was a big relief. I bedded his stall deep, gave him an endless buffet of hay, and he was pretty happy with his horse show life.

Aside from horse time, there was also a lot of good quality Horse-Friend time. Our group was huge, with 19 horses, and we had a little compound of trailers where most of us were camping. It’s really a fantastic group of people, everyone is super supportive of each other and genuinely helpful and kind. Sometimes it’s hard to find that, especially in a group that ranges in age from teenagers to grandmothers, and in experience from Beginner Novice to Advanced, but somehow with these folks it just works.

While the show didn’t end the way I wanted (spoiler alert), I still came away with a whole new level of confidence. This sport is hard, especially when we start challenging ourselves and pushing the limits. Sometimes things go our way and sometimes they don’t. Regardless of that, we had some really monumental moments and some big breakthroughs. Before Coconino I was 70% sure that we could actually do Prelim, but now I’m sitting at 100%. The lingering doubt is gone and I know for sure that we can do this. I’m sitting on a brilliant horse.

Amidst all that time with like-minded friends, there were some conversations about what success really means, what it looks like for different people, and how expectations change and evolve as we move through life. I had plenty of time for quiet introspection, hacking through the woods every morning, and I found myself reflecting on the last time we were at Coconino in 2016 – who I was then and what I thought I wanted. Everything is so very different now, including me. I’ve had a pretty massive change in perspective and mindset. If you’d told my 2016 self (who cared so much about placings and scores and qualifications) that we’d be back in 2019 at Prelim, and have one of the best shows of our lives despite not finishing, I never would have believed you. Things are so very different.

The Weldon’s Wall that has lived in my mind for years as tangible evidence of things we can’t do or a rider I can’t be… we conquered that shit without a problem. I made a figurative mountain out of that thing and my horse hopped right over it like it was nothing. What other limitations have I been putting on us for no reason? What else am I allowing to occupy a larger-than-life space in my mind?

While some things about it are definitely still a work in progress, and it’s certainly not fancy, Coconino is a great show and hopefully we’ll be back next year to give it another go. There’s something about Flagstaff that just manages to anchor itself to my soul. Maybe it’s the cold quiet mornings, or the sound of the wind whistling through the pines, or how you can look up and see so many stars in that big dark northern Arizona sky. Maybe it’s just the fact that I can go there and strip bare of everything except the equestrian part of me. No work, no personal life, no worries, just me and the best horse I’ve ever had. Whatever it is, it’s magical. I feel better today than I have in a long time. Recharged and ready to look ahead at what’s next. 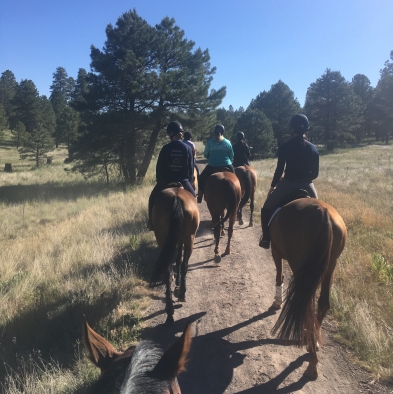 The boys traveled well, eating and drinking a lot (they downed their whole water buckets on that last Texas leg when it got really hot – I think the horses will miss the Flagstaff weather, too!) and settled right back in at home. They were super happy to get back to turnout last night, and I have no doubt that Henry will be napping hard in his stall this morning. He is looking forward to his summer break, I’m sure. Oh – and Presto grew a foot while I was gone.

Stay tuned for the actual show recap once I can get myself and some media organized!