After the ridiculously beautiful weather on Saturday, we were all pumped to continue filling the weekend with horses. We made plans for Bobby to come over to our barn on Sunday to gallop (his barn has been too wet to gallop for a while and Halo is straight up bonkers) and then go look at a potential young horse for him that afternoon. Oh, and Hillary wanted to sit on Dobby for a second time. Within a few minutes of planning, we easily and quickly filled Sunday just as thoroughly as we had filled Saturday. The weather was not as nice as the weathermen had promised – instead of 70 and sunny, it was 55 and overcast. But hey, it wasn’t raining, and it wasn’t 30 degrees. Beggars can’t be choosers at this point.

We took Halo, Henry, and Inca out into the hillier pasture, which is also the higher and dryer one. It started out well enough. We trotted a couple laps each way to warmup, then picked up the canter. The above video is our initial canter. So pleasant. And how cute is baby Inca learning how to canter in a group? And then we changed directions, crazy ass Halo TOOK OFF between Hillary and I, and Henry turned into a dolphin. Hillary had been trying to video that way when it happened, so she was busy trying to hang onto her phone, but she did capture this particular gem before everything went all Blair Witch.

He is ridiculous. One of many reasons he never made it as a racehorse, but at least I find it to be relatively hilarious. I’m pretty sure he thinks he’s actually bucking.

Much cantering and/or dolphining later, we were done with the 3 Muskaidiots, so Hillary grabbed Dobby and I grabbed Presto. Bobby hadn’t met either of them yet, so he got to join the Dobby fan club and play with Presto a bit. Hillary went out to the ring and got on Dobby, so we we all went out to spectate… he’s awfully freaking cute, and with a great brain. When she was done Presto got to make some horse friends of his own. 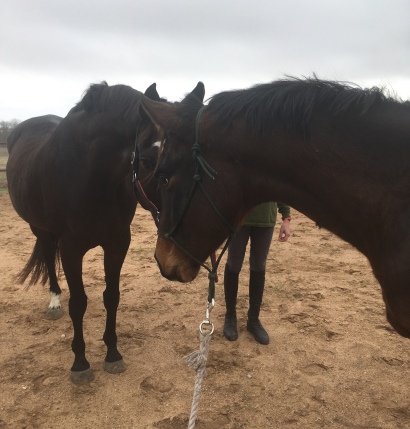 Halo and Dobby were much nicer to him than Henry ever is. Presto is definitely really weirdly obsessed with Dobby already, they have a similar personality and I think Presto can tell that they would be great friends. As for Halo… I think Presto just thought he smelled weird. Halo did let him nibble on him a bit and didn’t seem to mind the dumb baby horse, though. I think he’d make a pretty good uncle.

After we were done with those horses we made a quick stop for lunch and then headed out to sit on this guy.

He might be the most stout TB I have ever seen, and he’s quite tall too. Like if you told me it was an Irish Sporthorse, I would believe you. He might be a bit more of a project than Bobby is looking for though, and there are still a couple more we want to go sit on. But if you want a very large, very quiet, very reasonably priced project, let me know. The owners are friends of mine too and the horse has been well-loved.

11 thoughts on “Sundays are for Horse Friends”