You know that phenomenon where a weekend feels excessively fleeting but also ridiculously long? That was this one for me. Although really that’s kind of how the entire past couple months have felt, too. How it is already almost November? Yet at the same time, so much has happened since August. Life is flying by.

I kicked off the weekend with a quick ride in the rain on Friday afternoon. It just never stopped freaking raining all week long. Texas has gone completely off it’s rocker. While my fields were too saturated to ride in, luckily our arena has all weather footing, so even with a huge puddle down one side it was still safe to ride. I just channeled my inner Ingrid Klimke in that oh-so-famous flooded arena video, put some trot and canter poles in it, and off we went. Henry is a little delicate about getting rained on, so he wasn’t very happy with me at first, but the poles cheered him up a bit.

On Saturday, Hillary and I were up super early again to drive down to Pine Hill for a day of volunteering. Of course, Mondial du Lion cross country was live streaming from France, so I watched it most of the way there and gave Hillary a blow-by-blow while she drove. I feel like this is something only an equestrian would do – get up at 4:30, go 2 hours to a show, and live stream another show in the meantime. We’re an odd breed.

My job for the morning was dressage scribe, which I thoroughly enjoyed. I was paired with a great judge, who took the time to explain things and was very open to questions. We got along great, and the time completely flew by, despite it being… dressage. The afternoon was occupied by XC jump judging, my other favorite job. It was a little chilly, but I had a good coat, and it was overcast but not raining. A very pleasant day to spend the afternoon out in the woods, all in all. And better yet, no one had any problems at any of my fences. 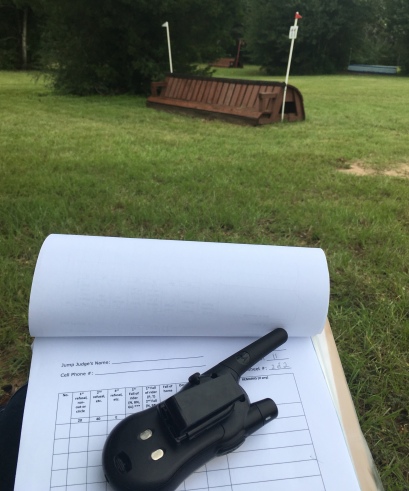 Plus I picked up the hat that I earned with my volunteer hours last time, and proceeded to send Bobby a picture of it to make him jealous. 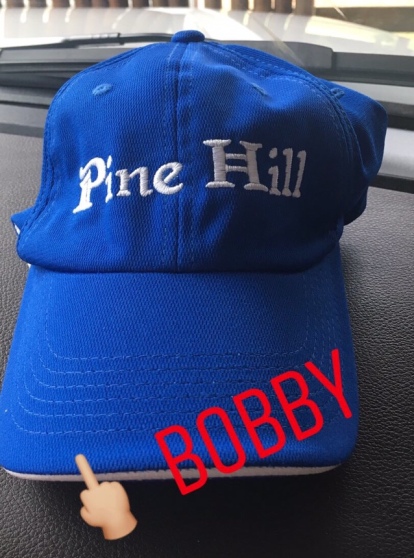 And NO, Bobby, no matter how many times you ask me, you can’t have my hat.

He was running BN with Halo, so I made sure to give him my favorite one finger salute as he came by my fence. The best part was that when he returned it, Halo spooked sideways and there for a second I thought he might miss the fence because he was too busy giving me the finger. That would have been epic. I totally would have put that on youtube.

If Saturday was all about giving my time away, Sunday was all about Me Time. It was, finally, a glorious day – we went over a week without seeing the sun at all. There was a slight chill to the air (HELLO FALL!), and sunshine aplenty. I waited until early afternoon to go to the barn, hoping that it would give the field enough time to dry. It totally did, the footing was perfect up on the higher side, and Henry and I went for a gallop.

Is there any better way to clear your mind and recharge your soul than going for a gallop on a good horse? I think not.

After putting Henry away I headed out to check on the feral DonkeyBeast.

Presto has been largely ignored lately, but I wanted to bring him in, pick his feet, knock some of the mud off, and do a little bit of a manners check-in. After grooming I took him out to the arena for a few minutes of in-hand work, then stuck him on the lunge line and trotted a couple circles each way, working on his voice commands. All of those buttons still work just as well as they did when we left off. After that we worked on the ground-tying lessons again, which definitely is NOT where it was when we last worked on it. I think the combination of cooler temps plus his awakening hormones are starting to make it a little harder for him to keep his feet still. Hopefully the weather will cooperate in December or January and we can make his snip-snip appointment. He still isn’t anywhere near what I’d call studdish at all, but you can tell that he’s trying to figure out what some things are for, and he’s a little more mouthy.

It was a good weekend for all of his brethren though, with Mighty Magic’s representing at shows across the world. The 6yo at Mondial du Lion, Trebor, ran a double clear XC in his 1* division, and the 7yo Figaro des Concessions was clear in the 2* with just 0.4 time. Across the pond at Fair Hill, Michel 233 finished 3rd in the 2* with Will Faudree, finishing on his dressage score. Take note of your future, kid!

Hope everyone else had a fun, horse filled, short-long weekend too.

6 thoughts on “Give and Take”