It seems like, a lot of times, when you say a horse is “smart and sensitive”, a lot of people take those things to be negative. I suppose if you want a horse that’s a bit dopey and a kick ride, then yes, smart and sensitive are probably not what you’re after. But to me, they’re good qualities. I like a horse that is naturally forward thinking, responsive, light, retains lessons well, and can think for itself a bit. So when I say that I’m noticing that Presto is smart and sensitive, I’m totally okay with that. It’s why I wanted all that thoroughbred blood in there, after all.

The next big step in Presto’s training will probably be long-lining and ground driving. With that in mind, I’ve started laying down some of the prep work so we can gradually work up to that. He already knows the basics on how to move his body away from pressure, and we’ve been working on voice commands (at least cluck and whoa) for a while. This past Saturday he wore a surcingle for a first time, and we introduced the word “trot”. Or as I like to say it to horses: “TER-ROT”. Because I’m weird. I dunno, I just think it’s more clear and positive sounding. As a voice command I’ve said it that way forever. Look, I already said I’m weird ok?

Before we got to the surcingle, I flopped a saddle pad all over him. He’s worn them before, with me just casually tossing one over his back sometimes. But this time we did a more formal “sacking out”, if you’d like to call it that. I flopped that thing around all over him, from nose to tail to hoof, tossing it high and low and slow and fast. He was a little concerned the first time it walloped him in the butt, but his feet stayed still. After that I tossed the surcingle on and off a few times, then let it hang while he investigated.

He was still unconcerned, so I went to fasten up the surcingle, but… um… he’s so scrawny. Even with it all the way up on both sides, I had a huge gap. So off I trudged into the barn to get a half pad. Or two. Yep, definitely two. With both of them stacked I could at least get the surcingle snug enough to where he could walk and trot around without the whole thing sliding right off. Poor kid. It’s hard being a yearling.

But he packed it around with no complaints, almost looking bored. So we incorporated our TER-ROT voice command, going from trot to walk to trot to walk and back again several times. He caught on really quickly, and after a few repetitions, saying “trot” was all it took to get him stepping off promptly into trot.

We’ve also been working a lot more in-depth on moving away from pressure. He’s known since he was a kiddo that a pressure on his side means move over and pressure on his chest means move back. Now we’re refining that a bit, using much lighter cues, and getting more specific to the area of his body that I want him to move, and in which direction, and how far. Presto is incredibly sensitive about that and is quick to respond to even the lightest pressure. 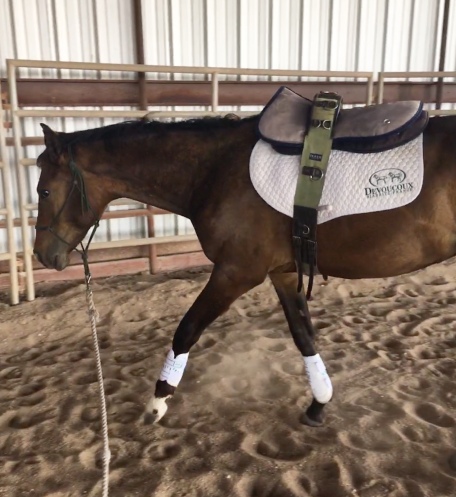 After that we worked on his ground tying skills, which are… uh… not so strong. It’s a lot to ask of a yearling colt. Especially one that’s always looking for something to DO. Asking him to just stand and not DO is a lot tougher than the opposite. He got a couple minutes of standing still though, so we’ll call that a win for now. He tried. Sorta.

The more I ask of him, the more it feels like I’m kind of peeling back layers of Presto’s personality and getting to know him a little bit better. These days I can usually predict how he’s going to respond to something, and guess which things might upset him the most or get more of a reaction from him. I also see that he’s got a good work ethic, and a strong desire to do find the right answer. He’s not lazy, he learns fast, and he retains his lessons amazingly well. He even seems to look forward to his “work”. There is definitely a stubborn/naughty streak in there though, and it comes out sometimes when he’s thought about something for a while and decided that maybe he knows a better way. Luckily at this point it doesn’t take much to dissuade him. That might get a little tougher with age.

He now also knows what “ENNNNHHHH!!!” means. Mostly because he learned that if he stands on the hose, no water comes out, so he would very deliberately look for it and then stomp. “ENNNHHHHH” is his “I see you, you little shit, and you better not!” warning to cease and desist before he gets in real trouble. I also had to start clipping him into the crossties differently because he figured out if he swung his head around a certain way, he could eventually work his halter over an ear. Okay, so maybe smart has it’s downsides.

Eventually we’ll put the long lines on (with a halter) and get him understanding that whole deal, but there’s no rush. Right now it’s time to shift the focus back on his in-hand stuff a bit more, since FEH Champs are right around the corner. Of course, after almost a whole month of looking like a relatively normal horse, his neck is starting to look like it’s been put on upside down again. Usually that precedes a really awkward growth spurt. I have no doubt that’s exactly what he’s planning on doing in the next few weeks. Maybe I should have entered the Future Event Camel Championships instead?

6 thoughts on “Smart and Sensitive”