What originally looked like a super packed weekend slowly fizzled away into not much at all. I was 100% ok with this, because lately it’s felt like every weekend has been even more hectic than the week preceding it.

I had a nice happy hour with friends on Friday, during which much queso was consumed on my part. You know it’s bound to be a good weekend if you kick it off with copious amounts of cheese. Then a cold front blew through overnight that dropped us 40 degrees in a matter of hours. I dunno wtf that was about. Winter was over a while ago here. Like it’s been in the 70’s-80’s for a month already.

Of course, major temperature swings like that are prime colic weather, so I donned a bunch of layers and headed out to the barn extra early to check on Henry. 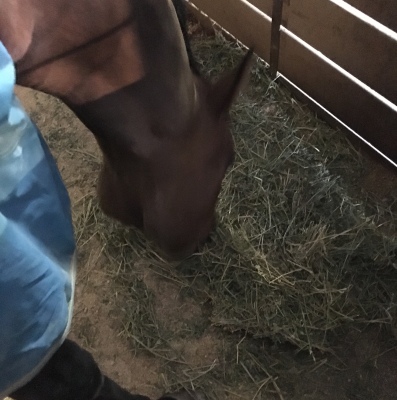 We have a new weekend guy, and I’m a helicopter horse mom, so I just don’t quite trust him yet. I got there right as he was feeding, so I tossed Henry a flake of alfalfa first, and then gave him his breakfast 15 minutes later. I wanted to wait around until he was totally done eating, to make sure he still looked good, so I set about organizing my trunk.

Honestly I didn’t do much besides realize I have A LOT of different creams, ointments, sprays, gels, and liquids. Like a lot. I really need to get them their own bin. Especially considering this doesn’t even include the ones that are in my trunk that’s in the trailer, or some unopened ones that are still in my truck. Nor does it include anything in my “injectable meds” collection, which also needs it’s own location. Someday I’ll buy a bin and organize this stuff. A 40 degree morning with howling winds was not that day.

I did finally get around to putting my Henry and Presto stickers on Stanley though, so that’s something? There’s still a lot of free space on him that’s just waiting to be filled up. I’ve fallen down on my sticker game.

After deciding that Henry was fine and happy and warm, I tucked tail and ran home. I will admit, it wasn’t THAT cold, but when it was 75 the day before and gonna be 70 again the next day, why even bother with a day where the “feels like” temp is 37? I’ll pass, thanks. Instead I went home and basically read a book all day, with a short break to build the cat a fort. Ok, it was just a clothes basket with a saddle pad in it, sitting on top of a Yeti cooler. Whatever, she loved it.

Sunday was much more reasonable, although still only 50 degrees by lunch time. It wasn’t very windy though, so it honestly felt kind of pleasant. I tacked Henry up for a conditioning ride and headed out to our hilly field. It was a very snorty, spooky journey. I rode him every day last week, but way lighter than normal, since after a show I like to give both of us a bit of a mental break. Mostly we’d just hacked, did some long and low days, and hopped through a gymnastic a couple times. The rides were short and easy. That, combined with the day off, combined with the weather, left me with a fresh horse on Sunday. I figured it seemed like a good opportunity to do canter sets, and I grabbed his sidepull since I was too lazy to go warm up his bit.

When we got out to the field I noticed that the winds from the day before must have blown this cardboard box out into the middle of the field. We went up to investigate, and sure enough it was empty, just flopped over and stuck on a mound of grass. Then I thought… hmm… we could totally jump this.

We went off and did our warmup trot, did a couple of canter sets, and then I aimed him at the box. The first time he leaped WAY up over it, not knowing what the heck it was, but he went straight over it. Extra points for honesty. Then he thought it was quite a fun game, and we jumped it off of each lead. At that point I was like “I really need this on video”, but alas… I was alone and there was nowhere nearby to set my phone. So instead I decided I’d just hold my phone and video it that way. Which required holding both reins (of my sidepull) in one hand, and holding the phone steady with the other. Could I even steer that way? Guess we’d find out.

When you go out to your conditioning field and find that the winds from the day before have left behind a perfectly lovely empty cardboard box, you don’t waste that kind of opportunity. We jumped it once off each lead with no problem, so then I decided I needed to video it… which required jumping it one-handed since I had nowhere to set my phone. He’s pretty game about my shenanigans. And do I get extra credit for the fact that he was wearing just a sidepull? 😂 #eventersofinstagram #eventerproblems #jumping #thoroughbred #betweentheears #goodpony #bitless #hackingout #equestrian #pferd

Y’all, this is Henny. OF COURSE I can jump a 2′ wide cardboard box in the middle of the field while holding my reins in one hand and a phone in the other. Duh. He may not be perfect but not many horses would put up with my crazy-ass shenanigans, much less be super into whatever dumb idea I come up with. He’s the coolest.

It was a pretty anti-climactic weekend, but the calendar is quite full for the next couple months, so I was glad for the break. I feel a little bit more relaxed and recharged. Which is good, because something important is happening today…

11 thoughts on “Just Playing Around”